When Ben Bridge Jewelers celebrated its centennial anniversary in 2012, the retail chain held a grand contest – 100 grand to be precise. By all measures and metrics, the inaugural contest was a mammoth success. Even Marc Bridge, vice president of marketing for the company, thought it would be a “one and done” contest.

As 2016 gets underway, Ben Bridge Jeweler $100,000 Wedding of the Century contest may celebrate its own milestone anniversary with the company considering a fifth such contest this year. It’s easy to understand the thinking behind investing in another contest. “Our bridal business has doubled in the last five years,” says Marc. 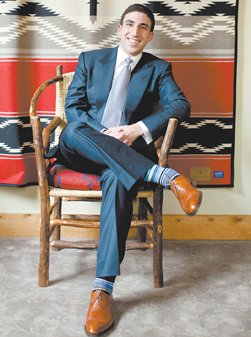 A lot has happened over a century. Back in 1912, watchmaker Samuel Silverman opened a store in downtown Seattle. Ten years later, his son-in-law Ben Bridge joined the firm. Ben later bought out his father-in-law and renamed the business. Today they boast 75 retail jewelry stores, most of which are based in the Southwest and West (Alaska, Arizona, California, Colorado, Hawaii, Minnesota, Nevada, New Mexico, Oregon, Texas, and Washington). The chain was acquired by Berkshire Hathaway in May 2000.

Even with celebrity CEO Warren Buffet as the jewelry chain’s top boss, and being part of Berkshire Hathaway (a publicly-traded conglomerate associated with many well-known, iconic brands), Ben Bridge Jewelers faces the same challenges as any jewelry store in the nation – familiarizing young consumers that have no occasion to buy fine jewelry with your brand.

In the formative Ben Bridge Jeweler $100,000 Wedding of the Century contest marketing meetings Marc and his team needed to find out – mainly from younger consumer demographics – answers to leading brand-awareness questions. Chief among them, how do these consumer groups know Ben Bridge exists, how to find the store (either online, store locations or both) and, most importantly, do these consumers have a positive association with the Ben Bridge brand.

The original contest was a big win for Ben Bridge Jewelers. With each new contest, however, the company looked for ways of improving it. First on the list was scheduling. In the past, the two-month Ben Bridge Jeweler $100,000 Wedding of the Century contests went from late January to early March.

“The original idea behind this scheduling was to capture bridal market customers while also garnering Valentine’s Day shoppers,” says Brick Kane, senior account manager at Jones Advertising, the Seattle-based firm chosen to help promote the contests. “Based on the huge increases in participation and engagement in the 2015 contest, we found the late summer months to be a better time frame to run the contest.”

Brick, in working with his staff and SocialToaster, a social media promotional and marketing company, discovered that Valentine’s Day does get its share of marriage proposal related purchases, but most bridal jewelry customers – especially men – are planning for engagement ring purchases from early August to about mid-September. 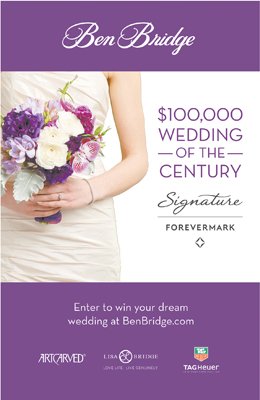 “Scheduling this year’s Ben Bridge Jeweler $100,000 Wedding of the Century contest in late summer made a huge difference in the number of participants and level of engagement,” says Brick.

Another big change to the contest was taking it beyond states with Ben Bridge Jeweler stores to nearly all 50 states. (Rhode Island, New York and Florida require a store location to run contests of this scale and nature or other contest-related laws, which made it difficult to run the contest in these three states.) Extending the contest beyond the Southwest and West Coast had many built-in benefits.

With more shopping done online and using mobile devices, Ben Bridge wanted to make their electronic shopping carts more accessible to a greater audience. And, with the inherent sharing capabilities of the most commonly used social media websites, word-of-mouth, testimonials and referrals can take many forms (mainly peer reviews), easily transcending state lines to increase brand awareness and online sales for the company.

Another major shift from the first three Ben Bridge Jeweler $100,000 Wedding of the Century contests was to take it from a grand prize at the end of the contest to weekly challenges, increasing a contestant’s chances of winning the grand prize. Promoting the contest included social media staples Facebook and Twitter, but in 2015, Instagram and YouTube were added to the marketing mix. Ben Bridge and Jones Advertising worked with Baltimore based SocialToaster (with an office in Los Angeles) to manage the social media portion of the contest.

Weekly contests helped significantly increase online impressions and social media metrics, but it also separated participants that were merely after a high-value prize. “This is something we had to be very careful about, especially with the contest being spread across so many social media websites with participants in so many states,” says SocialToaster CEO Brian Razzaque.

For the 2015 Wedding of the Century contest, weekly challenges ran the gamut from submitting photos of couples and sharing their love stories to portraits or selfies in front of Ben Bridge stores. Again, with the contest extended beyond states with store locations, participants could even submit images of themselves with the company’s homepage included to stay in the running.

Another significant difference from the 2015 contest compared to that of previous years was running it all through the Ben Bridge website. Links brought participants to landing pages on the Ben Bridge website so contestants could increase their chances of winning by submitting entries to the contest’s weekly challenges. 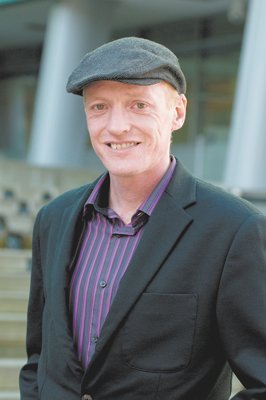 “The increased participation in the weekly challenges was like filling out more paper slips for a drawing,” says Brian. “The more you participated the greater the possibility of winning.”

Changing the ways participation could occur was another key difference from the 2015 contest when compared to previous years. “In the past it was focused mainly on a couple’s friends and family members participating,” says Brick. “In 2015, it was more focused on individual participation which made it much easier for participants.”

The results were impressive: The two-month campaign garnered more than 2.3 million impressions online, generating more than 56,000 social media shares and more than 80,000 visits to branded site content, all worth more than $600,000 in media. Most importantly, the 27,000 people that signed up are now available for remarketing and e-mail campaigns, ensuring that Ben Bridge can market to them over time.

Weekly contests also helped promote a range of jewelry types, brands and watch names Ben Bridge is keen to advance, from trending blue gemstone set jewelry (blue and white topaz pendants) to his and hers TAG Heuer watches, one of four vendor sponsors of the contest along with Forevermark, ArtCarved and Lisa Bridge. More importantly, the weekly challenges also served to identify how certain individuals and groups are navigating the Ben Bridge website.

“Through our proprietary process, we can track how the participants navigated the website and products that meant the most to them,” says Brian. “This gives Ben Bridge incredible target marketing advantages.”

The grand prize package also included prizes Ben Bridge utilizes to create top-of-mind awareness. Topping the list – especially for bridal customers – is Forevermark, a diamond that features the brand’s logo and an identifying number. Other grand prize jewelry includes diamond essentials such as studs and bracelets, diamond and color fashion jewelry, watches (namely TAG Heuer), as well as large cash amounts for the wedding ($35,000) and the honeymoon ($18,000).

While Ben Bridge is still contemplating the possibility of running a Wedding of the Century contest in 2016, the company has a challenging goal to achieve improved results over last year. And, the goal post is always moving. “The digital space is constantly changing,” says Marc. “We always have to strive to be better as we meet the ever-changing needs of the consumer, especially mobile presentations.”

Marc views the Wedding of the Century as a contest that can be executed by any jeweler of any size in most markets across the country. “Store owners that sponsor wedding related contests need to commit a lot of resources to manage it carefully, to make it easy and fun, but also beneficial to them as business owners.”

“A contest of this nature could definitely be done on a smaller scale,” says Brick. “A scaled down grand prize, and different engagement levels for small- and medium-sized markets, is possible.”

Brian concurs: “One or two different prizes could work in this type of contest, allowing a store owner to be less reliant on a single high-value prize to drive the contest. The key is finding good partners and being dedicated to constantly promoting and managing the contest.”

Short-term gains include sales spikes during and after the contest and extended campaigns that promote it. Long-term benefits include increased brand awareness, loyalty and targeted marketing to make customers more aware of a store’s market identity, its products and services.

Jewelry marketing lessons for growth in 2023