Clyde and Juanita Foshee have been in the jewelry business for more than 57 years. As owners of Foshee Jewelers in Lakeland, Florida, Clyde opened his store in 1953, one year before marrying Juanita. Their business has grown and sustained itself through many trials, but today the couple faces the biggest trial of their 56 year marriage – one that is life threatening. 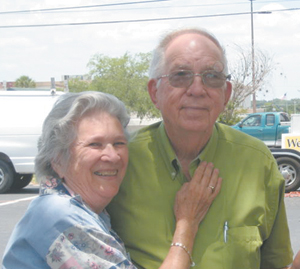 On Saturday, November 6th, Juanita was at home alone doing a little gardening in the back part of their property. Used as horse pasture, that part of the yard was typically left alone. But that day Juanita dragged a water hose and a pair of clippers to the back yard and started digging in the ground.

Seconds later thousands of yellow jackets rose up out of the ground and attacked the 81 year old lady. Realizing what was happening, she literally ran for her life toward her house, disrobing along the way.

Quickly she called her son, whose property backs up to theirs. Within minutes he arrived and found his mother unclothed and covered in yellow jackets. As he tried to pull them out of her hair he called his father, Clyde, who raced home to take his wife to Lakeland Hospital.

Experiencing breathing problems, Juanita was rushed by her family to their car, only to be followed by the yellow jackets. Upon arrival at the hospital, several ER employees continued to try and pull them off of her only to be stung themselves.

It became clear that Juanita’s body was reacting to the enormous amount of venom from the stings. To help her breath the ER doctors opted to intubate. After careful assessment the doctor’s reported counting more than 1000 yellow jacket stings on Juanita’s body.

Clyde recalled the doctor’s shock at the fact that there wasn’t a single place on her body that didn’t have a sting. “They’d even stung her through her clothes,” stated Clyde.

Baffled by what they saw, the doctor’s quickly started calling to find antivenin for the stings only to discover there wasn’t one.

“These doctors are wonderful, but they’d never seen anything like this,” said Clyde.

Like good southern men Clyde, his son, and grandson headed out to the back yard days after the attack to ‘take the nest down.’ They found Juanita’s clippers still embedded into the top of the nest. The men, who wanted to get rid of the nest, discovered they were in over their heads when all three fled the area while being stung as they ran.

“It didn’t take long for us to figure out we needed professional help,” Clyde said. “We called somebody who came out and removed the 2.5 foot by 2.5 foot nest. It probably housed 5,000 or 6,000 yellow jackets.”

Juanita experienced a heart attack the second day in the hospital. Since then she remains in a coma, fighting the poison left in her body. Her liver and kidneys sustained severe damage. The intubation tube has been replaced by a tracheotomy and a feeding tube supplies nourishment.

Her family remains by her side every day, searching for some signs of response. They recently rejoiced when, upon instruction, Juanita was able to pick up her hand and wiggle her feet. Her daughter was elated when, several weeks ago her mother tried to communicate with her by mouthing something.

The Foshee family holds out hope. They are a very close family living on adjoining land and working together in the store. Clyde and Juanita’s daughter, son and daughter-in-law joined the business many years ago, but Clyde is most happy about the recent announcement by his grandson that he, too, will join the business.

“We are a close family,” states Clyde. “If it weren’t for Juanita being so strong to begin with I don’t think she’d have made it this far.”

Foshee Jewelers specializes in clocks, watches and jewelry. The 78 year old owner still works six days a week for 12 hours a day serving his clients who drive from all over the Orlando and Tampa areas to patronize Foshee Jewelers.