After 50 years, Virginia jewelers still rolling with the changes

Goodman Jewelers may not be quite as old as the hills that surround its three locations in mountainous southwest Virginia, but it’s been around long enough – a half century this year – to see some remarkable changes.

Mark Goodman is the son of Bill and Shirley Goodman, the couple who started the family business in the small town of Chilhowie back in 1959. Mark now operates the Goodman’s third location, in nearby Abingdon, a historic town of almost 8,000 people 133 miles southwest of Roanoke along Interstate 81. 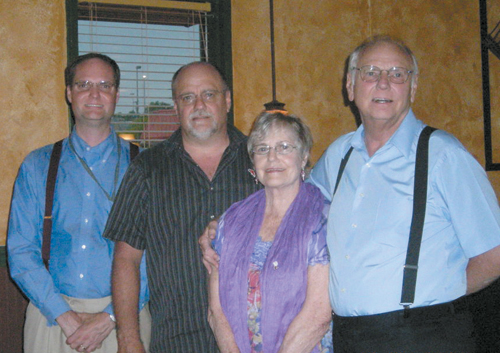 (L-R) Brothers Mark and Mikel Goodman with their parents Shirley and Bill Goodman
have been operating jewelry stores in southwest Virginia since 1959.

“It all started when Bill Goodman was a senior in high school and his shop teacher recommended him to a local watchmaker named Jack Hudson,” says Mark. “This was in 1952, and Dad began to learn how to repair and service watches. That started an entire career in jewelry, and here we are 50 years later with a second generation working in the business.”

After serving in the Army, Bill opened his first store, a very narrow building just 12 feet wide and 25 to 30 feet long.

“In 1961 we moved to a bigger location downtown, five or six times as big,” Mark says, recalling that the landlord was skeptical about his new tenant moving to a much bigger place. “But Dad promised them he’d never be late on his rent payment. So for some 23 years, he always hand-delivered the rent check on the first day of the month so he would never be late. He never mailed it. He always hand-delivered it.

“In the late 1950s through the 1970s and even up to the early 1980s, Dad sold pianos,” Mark adds. “He tuned them, he delivered them, and he bought them from customers. We also sold musical instruments, blenders, toasters, record player needles, eight-track tape players, strings for guitars and banjos.

“In small rural towns before the interstate came to the area, it was a long drive with heavy traffic down state highways to go to larger towns to buy household items. So we filled the gap and sold early electronic devices as well as music-related products.”

In 1983 Bill opened a new store in Chilhowie Commons, a shopping center that afforded the business a lot more visibility and foot traffic. “The business is currently in its 26th year in the same spot,” Mark says.

“My brother Mikel Goodman runs the store now. Dad is officially retired, but he still likes to come in to check on things, get his mail.”

Store No. 2, A Mountain Away
Bill still makes the rounds as well to the family’s second store, in Saltville, which opened in 1962 under the operation of Bill’s partner and childhood friend, Roy Cullop.

“Saltville is only about 15 miles direct from Chilhowie, but back in the early 1960s you had to go over a very crooked road over a mountain range and down a little valley called the Pike,” Mark says. “Traffic was heavy and there were a lot of trucks. It took a very long time to get there even though it was so close.

The 50-foot towers enabled the partners to receive and transmit across the mountain.

“They each had a CB radio in their vehicles,” Mark says. “They could call each other directly and instantly via the radio in each store and they could also call from their vehicles when traveling from one store to the other. This was their version of the cell phone in the early 1960s.

“You had to have a log-on call sign. Dad’s was 5Q 3511. When you picked up the mic you would say this first and then wait for a return call from Roy.

“The reason they stopped it was that they were beginning to receive skip from somewhere down in the Gulf and the language was foul.”
Roy died in 2007, and now his daughter Vicky Wilson operates the store.

Mom Makes Her Mark
Back in Chilhowie, Mark’s mother Shirley did all of the store’s advertising for years. She retired about five years ago, but like her husband she still pops in to check on things.

Around 1980, Shirley’s background as a nurse proved to be a boon for business.

“Diamonds were not a huge part of the business in the early days,” Mark says. “Watch repair was huge, gold-filled jewelry was big; almost no one had pierced ears, so you sold lots of clip-on earrings.

“We did a lot of ear piercing throughout the years. It really became a big deal in the late 1970s and early 1980s. Shirley is a registered nurse, although she had stopped nursing years earlier and was now working in the stores. We ran an advertisement that you could come in and get your ears pierced by an RN for $3.88, including the pierced earrings.

“The response was huge. We would have days where we might have 20 or more people wanting to get their ears pierced. This changed the business dramatically and we moved out of gold-filled and clip-on earrings and into karat gold pierced earrings.

“The move to karat gold jewelry also intensified with gold beads,” Mark says. “We sold hundreds and probably thousands of gold beads in the very early 1980s. Fourteen-karat yellow gold jewelry was in; gold-filled was on the way out.”

Mark’s brother Mikel, who had learned the art of watch repair under his father, went to Little Rock, Ark., in 1978 to learn advanced stone setting and jewelry repair. In 1980, Mikel went to Nashville, Tenn., to learn casting.

“At that point, we began casting our own jewelry and setting our own jewelry,” Mark says. “Diamond clusters became huge in the 1980s and we made all of our own seven diamond round and square clusters. It was a huge competitive advantage at that time and one that really made the business grow at all of our stores.”

On to Abingdon
The Abingdon store opened in 1988, with Mark at the helm, along with his dad. It’s a larger market, 18 miles west of Chilhowie, also right off of I-81.

“This is very historic town, with lots of professionals, doctors and lawyers, lots of restaurants, theaters, with buildings dating from the 1700s and 1800s,” Mark says.

Along with attractions such as the Virginia Creeper bicycle trail, the town draws more than 200,000 visitors for its Virginia Highlands Festival over a two-week period.

“Our main specialty, as it always has been, is service,” Mark says. “We’re all bench jewelers. We can do just about anything. We do custom work, custom mounting, all types of repair work.”

But some things that originated in the 1950s have never changed.

“We try to keep a lot of our original policies like layaways. Things like easy payment plans, which my dad did 50 years ago, we still do today.”

Mark’s wife Michelle designs jewelry for customers, working alongside Mark as she did during their high school years in the Chilhowie store. Utilizing Matrix 3D Jewelry Design Software, the store’s one-of-a-kind pieces are an important part of the business now.

Mark began learning gemology through the Gemological Institute of America in the mid-1980s. “I became a Graduate Gemologist (GIA) in 1988 and continued our move into diamonds,” he says.

In the Abingdon gem lab, Mark does a lot of diamond grading, as the colored stone business dropped off in the past several years. And he does a lot of appraisals. “I have a pretty decent little lab here,” he says.

A New Era: Recycling
The struggling economy has lit a fire under a new venture for the Goodmans’ Chilhowie and Abingdon stores: buying and selling pre-owned jewelry. “We’re permitted by our town now to buy and sell from the public,” Mark says. “Scrap gold, diamonds, old watches. A large part of our business is buying scrap, reconditioning and selling it.”

The pre-owned jewelry business really took off in its first two months earlier this year, Mark says. “I believe it’s a trend in the industry, and it’s tied to the economy.”

There’s a tremendous amount of excess jewelry out there, Mark points out. Styles change; customers’ tastes may shift from yellow to white gold, for example.

“Yesterday alone I spent almost $2,000 buying from the public,” Mark says. “A lot of it is nice, solid, heavy jewelry.

“One of the things going for us is that we’ve been here for so long, but customers can also come into our office, sell it privately, which makes them feel more comfortable,” Mark says.

“We’re finding extremely good success with the sales in the short period of time we’ve been doing it.”
As the Goodmans know, change is good.

For more information about Goodman Jewelers, you can call 276-676-3110, send an e-mail to goodmanjewelers@embarqmail or visit their website, www.goodmanjewelers.biz.