After surprise diagnosis, Keith Adwar finds himself on an ambitious track to find the cure 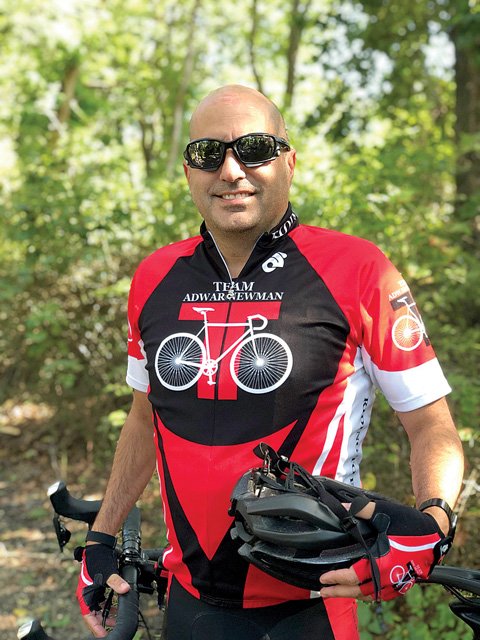 Keith AdwarKeith Adwar was the picture of good health, working hard at the helm of Long Island-based Adwar Casting Co., when the diagnosis came out of the blue.

“Eleven years ago, I was diagnosed with Type 2 diabetes,” Keith says. “It wasn’t my weight; mine came from stress. We had been audited by the IRS the previous year. It turned out fine, but it was a crazy time. And at my next annual checkup, they found I had diabetes. It came out of nowhere; the year before I was in fine health.”

Keith says he played basketball and a few things but was never into working out. “I needed to find something to burn calories,” he says. “Two of my friends who were into bicycling got me to ride and trained me how to ride a serious road bike. I started a bike group and got 15 to 25 friends to ride with me every weekend.”

That was the beginning of what’s become a rewarding and lucrative ride.

“We raised money for MS one year in New York, and a friend said, ‘Why not do this for diabetes?’ We found a ride with the American Diabetes Association, the Tour de Cure.” Keith says over the years Team Adwar Newman raised more than $1 million for the ADA.

After a disagreement with the not-for-profit, Keith decided to look elsewhere. “I went to the Diabetes Research Institute out of the University of Miami, where I went to college. They are a research organization just working to find a cure for Type 1 diabetes. They thought I wouldn’t leave the ADA, but the whole point is to ride, get healthy, and to raise money to find a cure. If a cure is found for Type 1, then Type 2 will come right after. 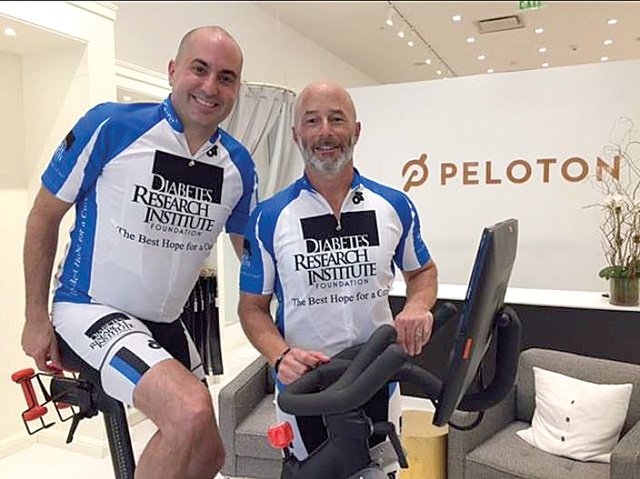 When the weather is bad Keith takes his riding indoors. Pictured with fellow cyclist David Newman.

“We were able to build a new ride, create awareness and work on finding a cure. We ride in the Hamptons every September, and this year we raised $75,000.”

Team Adwar has raised about $250,000 in the past four years, not only with the Hamptons ride but with a few smaller events. “I did one event where I rode a Peloton bike in their store window,” Keith says. “I raised $15,000 in two hours while my friends made fun of me . . . and I also sold some bikes for the store!”

The two friends who helped get Keith on the road to serious cycling were David Newman and Steve Garten. “We were Team Adwar in the beginning, then David’s son was diagnosed with Type 1 diabetes,” Keith says, adding that they went by the name Team Adwar Newman for a while. 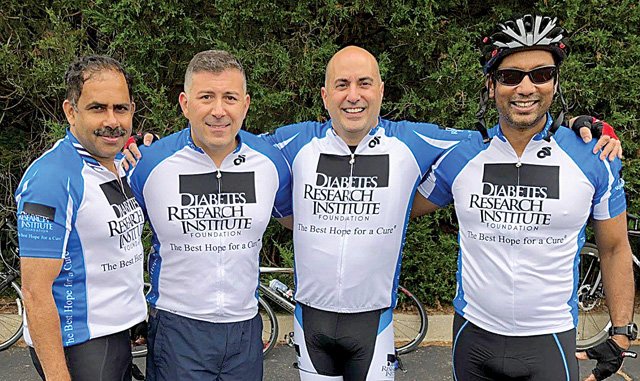 “Most who ride with me are friends, relatives or neighbors,” Keith says. “I don’t like to lift weights or do yoga. On a bike, I can sit for many hours and it’s comfortable to me. So I watch what I eat and ride my bike. A doctor might say it’s better to do different things, a variety, but riding a bike burns calories and works for me. Friends who started riding with me have lost weight. It’s not a big pounding on the knees like running is.

“Hopefully, I’ll be riding into my 80s,” says Keith, who at 54 years old checks his blood sugar several times a day. “Biking keeps me healthy and happy, and it keeps the stress down. Some people are afraid of riding a bike outside, but I think it’s relaxing. I can’t think of anything besides safety, looking out for cars or gravel in the road – and it keeps me from worrying about other things.”

Keith rides roughly 100 miles a week throughout the year. “If it’s under 50 degrees, I do the Peloton indoors, at night. I can’t in the morning because I go to work very early and waking up my dogs isn’t an option.  I’ll do a 35 to 45-minute Peloton class after work. During the busy holiday season, I’ll ride my Peloton bike, eat dinner and go to sleep early, because I get up so early. Yesterday I was in the office at 4:45 a.m., came home after work, rode the Peloton, had dinner and was asleep by 6:30. I was exhausted, but it was a great day.”

The family business is what draws Keith to work so early. Adwar Casting Company is a family-led casting business that Keith’s parents, Harry and Judy Adwar, launched in 1972. Harry and Judy are happily retired in Florida now, having left the business to Keith and his brother Gregg – who both studied marketing and business management in college. “Our children will be continuing to run the business past the time I’m here,” Keith says. The company offers more than 185,000 styles including bridal, two-stone rings, earring climbers, initials, ladies’ rings, men’s rings, earrings, bracelets, charms and religious pieces, and it serves more than 7,000 customers, including retailers, wholesalers and manufacturers. All of its products are made in the U.S.A.

Keith says many people in the jewelry industry reach out to talk about diabetes. “Customers of ours across the country say, ‘Why didn’t you call me? I would love to donate.’ And I have customers who are diabetic – but a lot of them don’t want to publicize it. I would never go to my customers and ask for a donation. I would find it very difficult to ask a customer for money. So I put out the information, and if they want to donate, great. Or they can start their own ride, like my customer who started one in Florida. That’s how I deal with my diabetes – I ride my bike.”

To donate to the Diabetes Research Institute, visit www.diabetesresearch.org. For more information about Adwar Casting Company, call 516-678-7755, visit www.adwar.com or send an e-mail to sales@adwar.com.