Fluorescence. It’s easy to say but difficult to spell. Most diamond consumers – chiefly young bridal jewelry consumers – struggle enough with the 4Cs let alone fully understand or even appreciate how a diamond reacts to ultraviolet light. That is until recently. 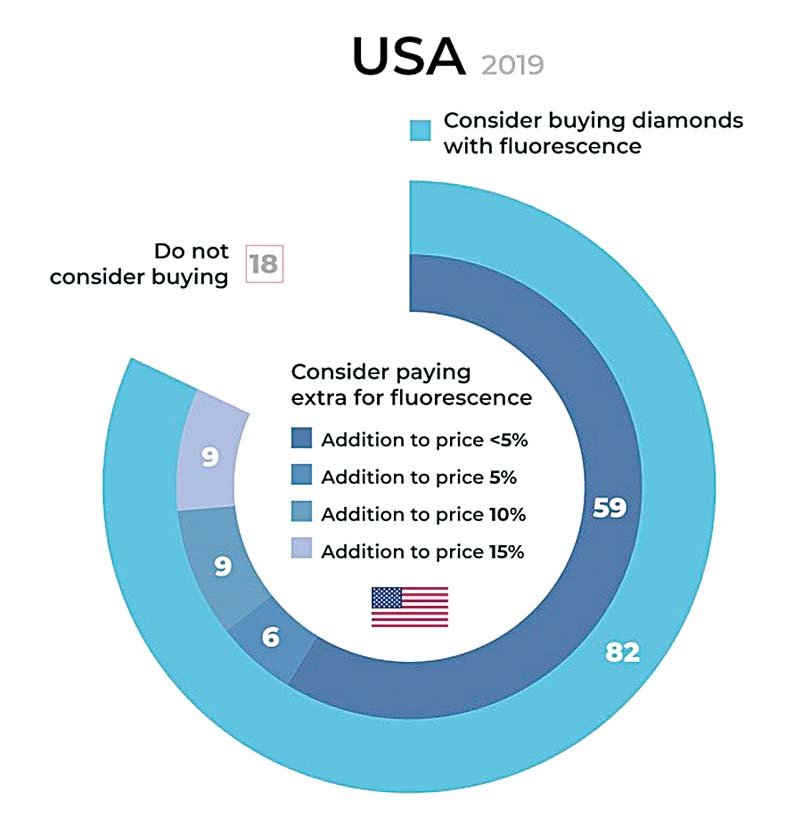 ALROSA is looking to market diamonds exhibiting fluorescence as a unique property that most consumers want. This is based on the Russian diamond producer’s extensive market survey in two major diamond consuming countries.

In 2019, ALROSA surveyed 4,017 people in the US and China (50 percent were Americans of various age groups from major US cities including New York, Boston, Washington and Los Angeles). Not surprisingly, 74 percent of the US respondents “don’t know or are poorly educated” about fluorescence.

Upon receiving some basic education on fluorescence, 82 percent of respondents would consider buying a diamond with this feature. More interestingly, 60 percent would be willing to pay a premium for a diamond exhibiting fluorescence – as much as a 15 percent premium for some. This is especially true of
Millennials and Gen Xers. 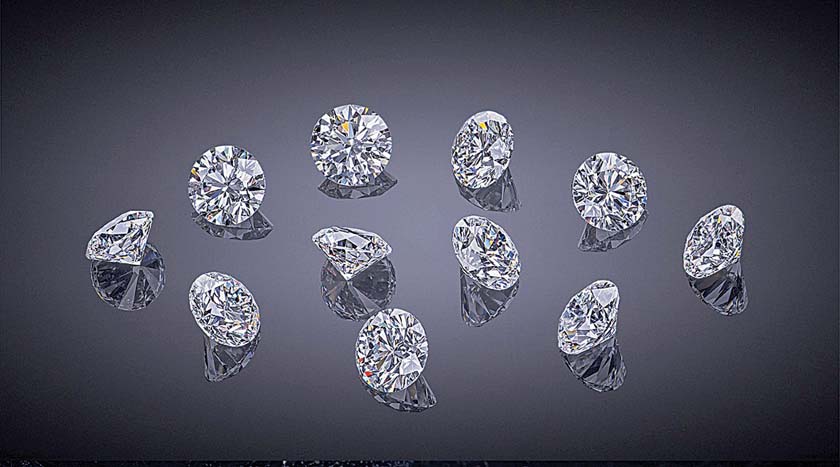 Russian diamond producer ALROSA is looking to market fluorescence as a plus with their diamonds.ALROSA positions the UV reaction to a diamond exhibiting fluorescence as a “wow” factor. Their survey respondents had similar reactions when seeing a diamond’s fluorescence, with “unique,” “cool,” “interesting,” and “exciting” as descriptive words. Or, “it glows more than I thought it would,” according to ALROSA’s survey.

The Gemological Institute of America (GIA) has conducted many comprehensive research studies on fluorescence. Most notable is the 1997 research results, which appeared in the Winter 1997 edition of GIA’s quarterly Gems & Gemology, which has become a gold standard for understanding fluorescence and its impact on a diamond’s value, starting with rarity and salability.

Of the diamonds submitted to the GIA over the last decade, approximately 25 to 35 percent exhibit some degree of fluorescence. This luminescence characteristic, as stated in diamond grading reports, ranges from “nil” to “slight” on the low end to “medium” and “strong” on the high end. In very rare cases some diamonds will exhibit “extremely strong” fluorescence, which gives the precious gemstone a “milky” or “hazy” appearance. Only 0.2 percent of fluorescent diamonds submitted to the GIA exhibit this effect. 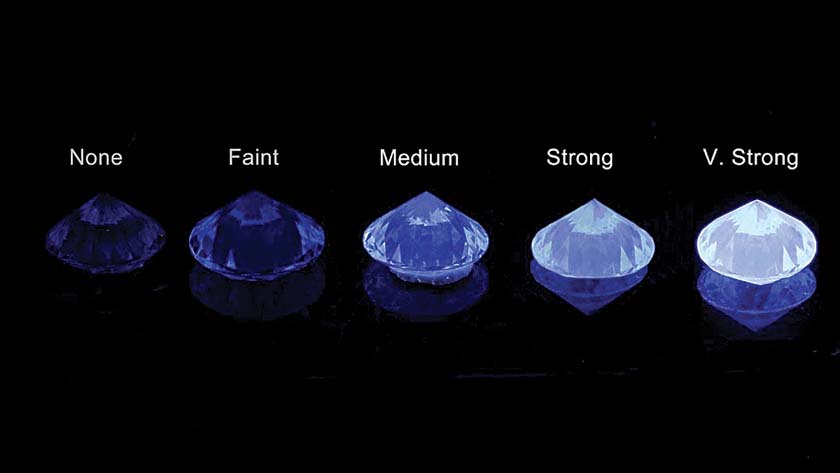 Various grades of fluorescence in diamonds.

In more than 95 percent of diamonds that exhibit fluorescence, the visible color is blue, the compliment color to yellow. For low-color diamonds (ranging from J-M in color) the blue of fluorescence actually “cancels out” the inherent yellow color giving the diamond a whiter appearance. For diamonds with a color grade from D-F, fluorescence can have the opposite effect.

Fluorescence has proven to have a selling point, be it improving the appearance of a lower color grade or discounting a near-colorless to colorless diamond. And, as Boomers age and retire, Millennials and Gen Xers are looking for something different.

The instant-gratification generations need something new. Conflict-free, sustainability and lab-grown diamonds are still factors when buying diamonds for younger consumers. With the right information, education and understanding, however, fluorescence can stimulate diamond buying for new jewelry consumers while changing the mindset of older ones. 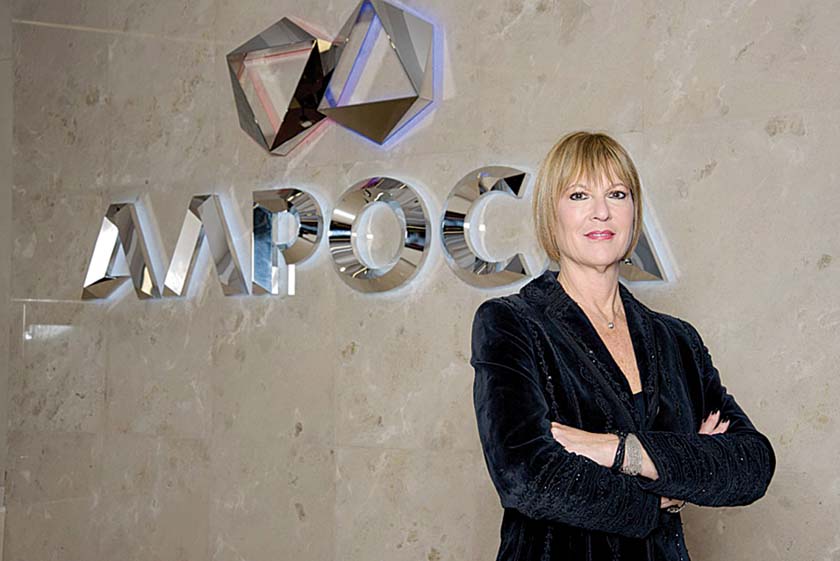 Rebecca Foerster, president of ALROSA North America.“No generation of consumers consider fluorescence a bad thing: they are generally not aware of this feature,” says Rebecca. “When explained, all age groups are curious, and 82 percent of respondents said they would consider buying a diamond with fluorescence.”

ALROSA’s new marketing strategy also seeks to educate old school thinking about fluorescence within the trade. “Now is the time to challenge old industry dogma,” says Rebecca. “Consumers are striving for something new and exciting. Studies conducted by the HRD in Antwerp and the GIA help us to do so. A lot of work on educating the trade has yet to be done and we are happy to share our findings.”

“The global economy is entering a new era of uncertainty and, as a market leader, we approach it with a long-term strategy in mind,” says Rebecca. “In an economic storm people turn to safe investments and long lasting traditional values, such as natural diamonds. We should offer consumers exciting new features that make them happy and create an emotional connection.”

In addition to educating the industry and consumers, ALROSA is working with designers and jewelry making companies to produce pieces and collections “based on the visual features of fluorescent diamonds,” says Rebecca.

The ALROSA marketing campaign comes at an interesting juncture for the diamond world. From diamond manufacturers to wholesalers, on down to retailers, there are fears that lab-grown diamonds are garnering too much consumer attention and market share – for those invested in traditional mined diamonds. 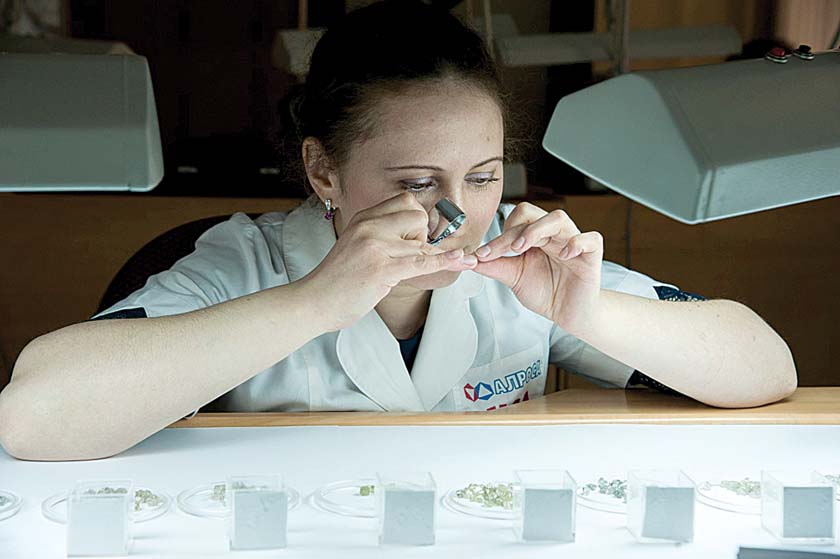 With rapid advancements in technology improving the production quality of lab-grown diamonds, testing for fluorescence may become a quick and cost-efficient detection method – at least for some lab-produced diamonds. In a November 2019 research study from HRD Antwerp on colorless CVD-produced, none of the study’s 2,059 researched chemical vapor deposition diamonds in this colorless range exhibited fluorescence.

Given ALROSA’s marketing push, unique jewelry designs and collections, plus some gemological benefits, 2020 may be the year when fluorescence not only turns heads, but changes minds.