At 85, N.C. jeweler keeps mixing business with plenty of pleasure

A long time ago, Bill Griffith learned the secret to success was simple: Have fun with it.

And so he has, stirring up excitement with eagerly anticipated promotions at his jewelry business in the heart of charming

“People love it,” says Bill, whose sparkle and enthusiasm belie his 85 years. “We have steady customers here in the store. We like to kid and have fun.

“I learned some tricks from some of the jewelers I used to call on as a salesman. One or two jewelers would have drawings at Christmas time to give away a watch or something. I decided I’d try it and did, and it is tremendous! Everybody gets excited and has fun.”

The store now does promotions for Christmas, Valentine’s Day and Mother’s Day.

“Customers get a ticket for every dollar they spend,” Bill says. “You buy $100 and get 100 tickets. You think you have a better chance,” he laughs, “but you really wouldn’t if everybody’s got that many tickets. It’s the psychology of selling. You’ve gotta get them in the front door.

“They’d get so excited over the tickets they wouldn’t even remember what they’d bought in the first place. It’s been very successful … it brings customers back.

“When we draw, the store’s full of people, the telephones are ringing. They love it; they wait for it. Already people are asking when are we going to start giving way the tickets again.” 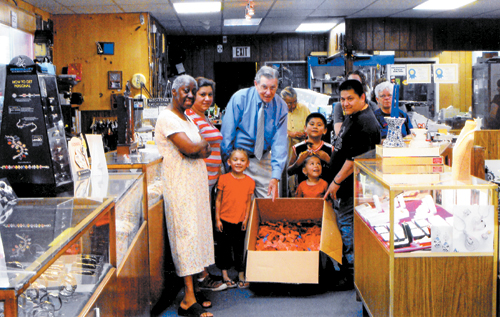 Bill Griffith (center) creates excitement and fun with raffles and other promotional events at his store in Marion, North Carolina.

Bill adds that he doesn’t scrimp on the prizes. “We give away nice things – last Christmas we gave away a beautiful $2,000 diamond ring. If you want to give away something, give them something that’s attractive, something they want.

“We’ve done all sorts of promotions over the years, giving away pots, pans, screwdrivers … it is funny. People just love it.”

Bill grew up in , and worked as a shipyard welder during World War II.

“I did that for three years, then came home and didn’t know what to do,” he says. “I thought about going to radio school in , to learn to work on radios. Then I was talking to somebody about a watch, and it dawned on me. I thought, ‘Everybody has a watch.’ It made sense I should go to watch-making school.

“So I went to a watch-making school in Within a couple of months I thought I was an expert, but found out I wasn’t,” he laughs.

Bill would travel to to pick up watch bands, stems and other items from Southern Watch Supply. “I’d go there to get material for watches. I was in there and someone said, ‘How would you like to come work here? Can you put jewels in pocket watches?’ And it just so happened I had learned in school to do that.”

Later, the company asked Bill to go on the road. “So I did sales for Southern Watch Supply starting in 1947, traveling in northern , the eastern part of , and .”

In 1949, Bill started working for the Non-Retailing Company out of , selling only to retailers.

“I knew this jeweler here, Roy Morrow in ; I’d called on him, and I knew from my travels that he did lots of business here in this small town,” Bill remembers. “In 1954 I went into business with him; it was Morrow Jewelers then. Everything clicked along good, I knew watch making and knew how to sell jewelry.

“After a year, wanted to open a store in Morganton (NC), so I bought this store and I have enjoyed it since.”

Bill embraced this small town 36 miles east of in the beautiful mountains of western . His late wife, Charlotte, worked with him for 45 years as a salesperson and bookkeeper, along with handling the wedding registry. The couple had three children, and one of them, Tim, has worked alongside his father since 1977, performing a lot of the jewelry repair.

“We do a very large jewelry repair business and watch repair,” Bill says. “It gets people into the store. You have to get them through the front door.”

Back in the Old Days

The space that Bill Griffith Jewelers occupied in the beginning was just 12 feet wide, and was actually an enclosed alley once used by horses and buggies.

“You could see where the wagons would hit the bricks and dig them out,” Bill says. “I added on to that building about three times.

“We used to sell everything. We’d sell dishes, whole sets for $29.99. I’d sell them to people who’d pay a dollar or two a week on them, and if they didn’t pay, I’d go pick up the dishes.”

In 1995, Bill purchased the building next door, at three stories the tallest building in town. He rents his second-floor space to other businesses.

Bill has remained loyal to downtown, standing steady as other businesses moved outward to shopping centers and malls in the early 1980s. He was instrumental in creating the Marion Downtown Business Association, which has honored Bill as its “North Carolina Main Street Champion.”

Bill was also a founding member of the Marion Merchants Association and served as president.

These days, you’d never know Bill is an octogenarian. He works six days a week in his life’s work as a jeweler and watchmaker.

“It’s lots of fun; I have a good life,” says Bill, who’s now married to his second wife, Connie. “I’m 85 and take no medicine. I just keep going.

“My motto is: Treat your customers like they are your family and you’ll be successful. We try to do right, and we enjoy the small town.

For more information about Bill Griffith Jewelers, you can call 828-652-3443 or send an e-mail to billgriffithjewelers@yahoo.com.

From nursing to jewelry, a Wisconsin retailer’s career conversion