At Precision Platinum it’s all in the family

“Every piece of jewelry has a story. Ask the story first,” suggests David Phelps as I join his family for wine and delicious catered Chinese cuisine provided by neighboring Neo China at Precision Platinum, their beautiful new store in Durham NC, now also featuring the Collections of Jewel Couture LLC.

David and Gaybeth Phelps and son John begin to unravel their own family’s saga, leafing through photos from the family album. “We didn’t choose jewelry. Jewelry chose us,” Gaybeth recounts. “David’s father started forging silver and selling his craft from a tent in in 1971, expanding soon to the 5000 square foot Mad River Canoe Company in Campton.

“David and I met as students at in and were married within a year. In 1977, David joined the army, becoming a helicopter pilot.” The growing family – son John arrived soon after – moved to where Gaybeth attended nursing school. “David loves anything that flies. At the top of his class in flight school, he takes everything to a higher level.  His fascination with mechanical tinkering includes flying model airplanes and rebuilding car engines as a hobby. And we have twin Harley Davidsons!” 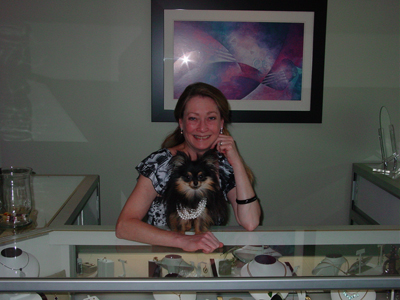 “David’s parents followed us to in 1980, opening William Phelps Custom Jewelers. After David’s military service, he went to work for this father as a bench jeweler, learning by doing.

“At first, it was sink or swim,” Dave reveals. “I’ve been a bench jeweler now for over 30 years. I love the challenge of figuring out how to create a piece, new ways to do something, always pushing the envelope.  We will make a ring from scratch, have cast pieces from bench sweeps and do old-fashioned hand engraving. People in the trade send us custom work to do that no one else can do.

It’s a family affair all around. The cozy environment is enhanced by Gaybeth’s interior decorating – designing display cases, painting and decorating walls – drawing on her fiber arts skills from spinning to weaving. She’s a soon-to-be Graduate Gemologist taking her final distance education course at GIA, .

Son John, after graduating from college with a Bachelor of Science in Business Administration, joined the family business where he works at the bench along with three additional bench jewelers. The family pet, Miniature Pomeranian Chalcedony, weighing in at three pounds, completes the family environment. People stop by just to visit “Callie.”

“There’s a certain dynamic that works because we’re a family,” David explains. “We try to make everyone feel like family. We get included in people’s lives. Jewelry is very personal to a lot of people. People will tell their jeweler things they wouldn’t tell a therapist.

“One couple actually got engaged at our store. The groom wanted to make the ‘grand gesture’. We suggested he focus on the highest quality diamond. He could always upgrade the setting for a future anniversary. He proposed outside our front door and brought her in. It was a complete surprise. Flawless. All the wedding party have subsequently bought their rings here.

Philanthropic by nature, the Phelps support especially Duke Children’s Hospital, Duke Hospice and the Guardian ad Litem program, representing children. “Everything we do has a philanthropic nature. If it’s not helping someone, we’re not doing it.”

It’s a rich, rewarding life. “If you start working in jewelry, there’s no end to learning,” David reflects. “You find challenges here you can’t find anywhere else. So many facets – bench work, sales. There’s always room for growth, endless opportunity.”

The Phelps family’s story – positive lives enhancing so many others – perfectly reflects their family values. Spinning their family story, they reflect their spin on life.

Mia Katrin is an award-winning, internationally celebrated couture jewelry designer specializing in high-end necklaces with precious gems in 18-22 karat gold as well as the new affordably priced Jewel Casual Collection. Her Collections, which have been worn by A-List celebrities, are featured in many top galleries and stores throughout the country, where she regularly hosts Trunk Shows. Contact Mia via her website, http://jeweljewel.com, e-mail info@jeweljewel.com or call 1- 877 JEWEL-MY (539-3569).