There’s a saying in Hollywood that getting nominated for an Oscar is just as good as earning one. Tell that to Scott and Danielle Bohall, owners of Treasures Custom Jewelers. Back in the late 1990s the couple, along with their daughter Jessica Kelly, first entered a jewelry design contest that didn’t go as well as they’d hoped. 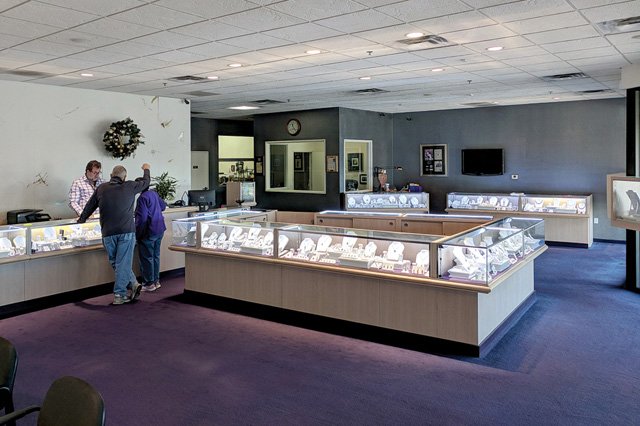 “We entered a state jewelry design contest in 1997 and got our butts kicked,” says Scott. “We got some good feedback from the judges and figured out why we did so poorly. Over the next year we made a lot of changes to the quality and type of gemstones used, design qualities and jewelry making techniques. The next year we placed and haven’t looked back since.” 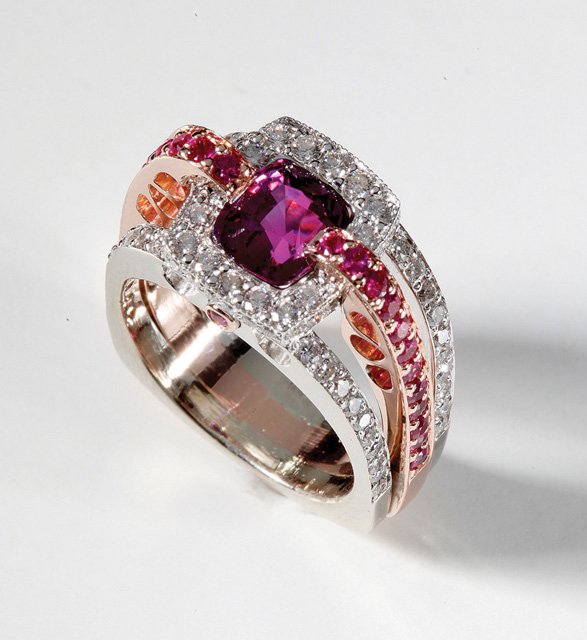 14K rose and white gold ring featuring a 2-carat Sri Lankan ruby with ruby melee and diamonds.After that early defeat and subsequent victory, over the next 20-plus years, Scott, Danielle and Jessica have earned 33 design awards and counting. The jewelry designs and the awards run the gamut, from the Arizona State Jewelers Association to the coveted American Gem Trade Association’s (AGTA) Spectrum Awards and even a few international awards. This makes the Glendale, Arizona-based jeweler the most award-winning jewelry designer in the Grand Canyon State.

Entering jewelry design contests in the formative years of their family business was no accident. In the late 1980s Scott and Danielle were working for different retail jewelry chain stores in the same mall. After a number of meetings based on store business, Scott asked Danielle out on a date and they got married. The combined knowledge and experience in jewelry retail was all the couple needed to open their own store in 1991.

“Back then we had a 10’x10’ booth at the local indoor market, selling whatever we could Friday through Sunday,” says Scott. “We started with about 12 pieces of jewelry and a set of agate bookends. That was it.”

A market fixture for more than a year, Scott and Danielle garnered a strong list of regular customers. After 18 months at the weekend market, this customer base gave them enough incentive to open their own jewelry store. As with all beginnings in retail jewelry, the couple’s first store in 1991 was small (750 square feet). And, like all new business owners, the couple had big ambitions. 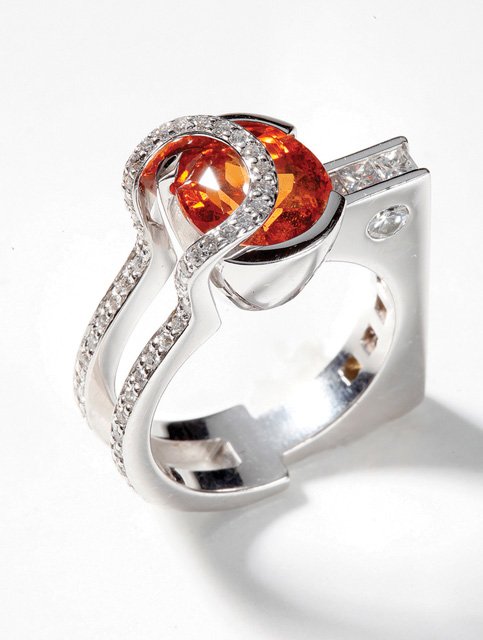 Scott grew up playing a lot of sports, which gave him his competitive spirit both personally and professionally. While searching for a site to open the couple’s retail jewelry store he was also busy doing the due diligence on ways for a new retail jeweler to stand out in Glendale.

After exhaustive research Scott and Danielle determined that Glendale didn’t have a retail jewelry store with an award-winning designer. And, the city also needed a jewelry store that offered better competitive pricing, driven by smaller margins on diamonds and colored gemstones.

The combined founding qualities worked. But Scott decided to add local honors and recognitions to the mix by running an exemplary business, being a better citizen through various community outreach efforts, and joining local business organizations – chief among them the Chamber of Commerce.

Working with local charities and non-profits earned the couple numerous recognitions. The couple also lectured at Glendale schools on marketing and entrepreneurship. And, active involvement with the Chamber of Commerce then and now continues to provide a steady stream of lucrative networking opportunities with business leaders in the area.

Scott has never shied away from seeking out awards and recognitions, some even accidental. Notable business-related awards that support the couple’s market differentiators include receiving multiple FindMyJeweler.com awards for best pricing on jewelry in Glendale. 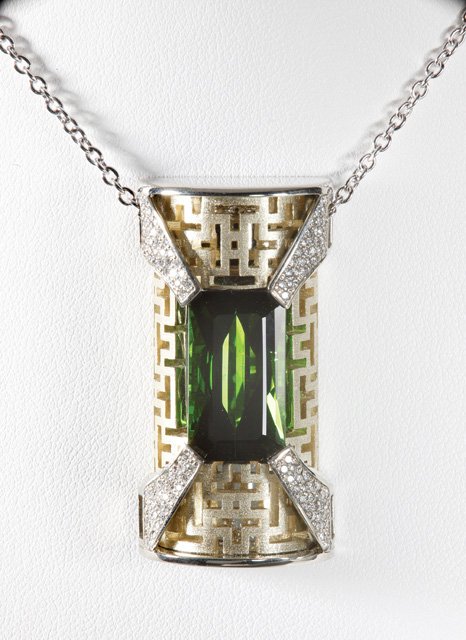 And, given Scott’s international gem buying trips and his opal contacts in Australia, he entered several pieces of the family store’s custom opal-set jewelry pieces in an international opal design contest. Some placed and one even took Best of Show.

By promoting the jewelry design awards, the local business honors and community recognitions, Scott and Danielle have had a number of key market differentiators to promote their retail store over the years.

“The early promotions worked well for us,” says Scott. “People like doing business with a retailer that has award-winning jewelry designs, is known for competitive pricing, and gives back to the community. In time word of mouth became our best form of advertising.”

In 2001, the couple expanded their store to a larger retail space with 3,100 square feet. And, with more elbow room came more capabilities and abilities to serve their market. Their daughter Jessica (now in her early 30s) matured as a retailer and designer. These days each member of the family business is designing jewelry.

And, as the business expanded Scott increased his gem buying trips to source bread-and-butter goods and unusual finds. His buying destinations of choice are Bangkok, Thailand and the Hong Kong trade shows for colored stones, and Australia for opals. Less exotic but still very unusual designs include custom and award-winning pieces set with agate varieties, fossilized and agatized materials (a 150 million year old dinosaur bone) as well as unique opals from Australia.

Favorite gem purchases from his Southeast Asia junkets include purple and orange sapphire, color-change gemstones (including sapphires and garnets), and odd-sized and unusual gemstones that aren’t calibrated or mainstream. “Again, it’s all about market differentiation,” says Scott. “Bring home gemstones people have never seen before and set them in custom-created pieces from an award-winning designer.” 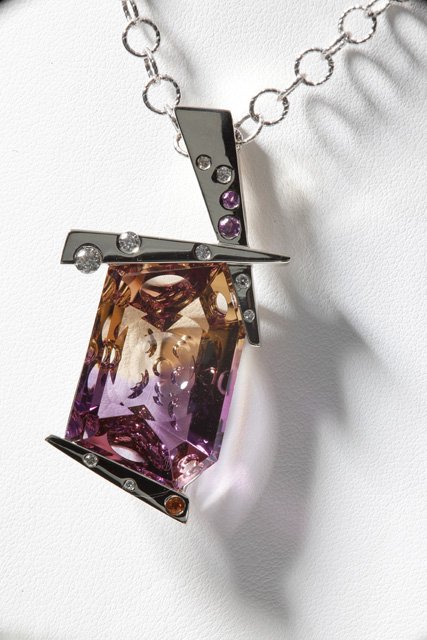 Scott Bohall prides himself on finding unusual gemstones like this Michael Dyber custom cut ametrine and diamond pendant in 18K white gold.Part of what sells a piece of jewelry is the story behind it. If that narrative includes winning a design award, the piece practically sells itself. Scott and his family have sold award-winning designs as one-offs. And, selling variations on these winning themes has also proved to be lucrative.

“We never reproduce an award-winning design,” says Scott. “The cache of buying a singular, award-winning piece of jewelry is sold to the customer with that guarantee.”

For the last two years, Scott and his family have been focusing more on business operations and less on design contests, but a family store goal for 2019 is to get back into maintaining their title as the winningest jewelry designer in Arizona.

Scott and Danielle would also like to work more with their daughter Jessica to promote their designs better on social media websites. With regards to entering design contest, Scott says: “Take the time to complete the contest applications. You have nothing to lose and everything to gain.”