HH Gold Inc., known since 1985 as the place to go for special orders, unique jewelry and coin jewelry, recognized an opportunity several years ago to capitalize on the extra melee gathering dust in retailers’ stores following the recession of 2008. 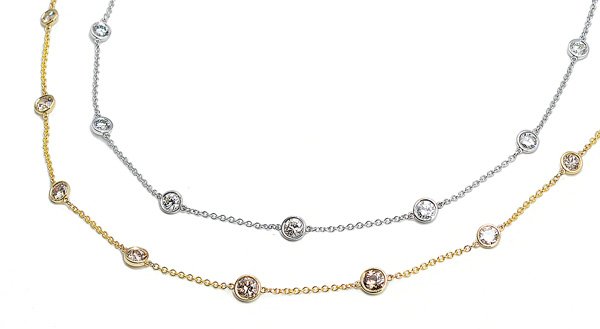 Owner Howard Horowitz says repurposing these small diamonds was a natural step for his manufacturing and wholesale business in Canoga Park, Calif., a Los Angeles suburb. “During the recession, the jewelry industry was hurt pretty badly,” he says. “A lot of jewelers survived only because they were able to buy over-the-counter for scrap and then they’d resell or melt the pieces to make money. They’d pull out diamonds from the pieces they’d scrap, so they’d have large inventories of this melee sitting around, not making money for them.

“We started doing the diamond-by-the-yard necklaces about seven years ago, and now we’ve done thousands of pieces,” says Howard, noting that diamonds never go out of style. “The demand is pretty steady; it doesn’t seem to be affected by jewelry fads.”

Store owners could take diamond melee that cost them almost nothing and create a piece that could sell for $1,500 or more, Howard says. Customers are limited only by their imagination as to what design they want HH Gold’s skilled artisans to create. The company has done as many as six different shapes of diamonds on one necklace, which can be made with different colors of 14-karat and 18-karat gold – white, yellow or rose. Recently, the company created a 70-inch necklace using 275 diamonds totaling 43 carats, worth more than $40,000. 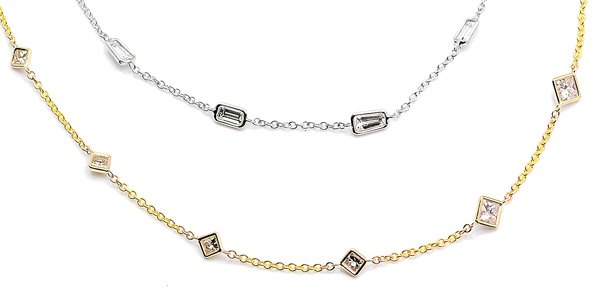 With retailers supplying the diamonds in almost all cases, HH Gold’s necklaces, bracelets and anklets are always custom made. The company’s turnaround is a swift five to seven workdays. “Even during the Christmas season, we never took more than seven working days to do a necklace,” Howard says.

“Most of the necklaces we make have seven to eleven diamonds,” he continues. “With jewelers supplying the diamonds, they typically cost $300 to $400, for round diamonds, other cuts and larger diamonds slightly more. If they’re not going to hang something from the necklace, it’s good to have an odd number of diamonds so there’s one in the center.”

Diamonds by the inch is definitely a growing part of HH Gold’s business. “It was all word of mouth before, with our own customers reordering on a regular basis. We recently began advertising in Mid-America and Southern Jewelry News and have gotten tremendous response from that,” Howard says. “We’ve picked up a lot of new customers and a lot of those have already reordered because they’re happy with the service and the quality.

“Occasionally a jeweler will order the diamonds as well, but more than 90 percent of them already have an inventory of diamonds. In addition to diamonds, a lot of jewelers will mix colored gemstones with the diamonds, so they’ll have a piece with diamonds and sapphires, or diamonds and rubies. They’ll usually supply those colored stones as well, but we can add them if needed.”

For round diamonds, HH Gold uses standard-size bezels that look the same on both sides. “The unique thing about us is if someone wants a shape other than round – like pear, princess,  or marquise – we hand make all the bezels, even for the round diamonds, so that all the bezels will match exactly.”

Before he entered the jewelry business, Howard worked for a coin dealer, cultivating the connections and sources for whatever coins he needed. He maintains those connections still, traveling to acquire his treasures, both in the United States and overseas.

When HH Gold was launched in 1985, the company focused on coin jewelry and coins, and eventually branched into other areas as Howard’s wife, Beverly, joined the business on the administrative end. “Everything we’ve done is either a niche area or custom order,” Howard says. “We have access to the top jewelry craftsmen, so we can pretty much do anything. Our primary focus has been on the independent retail jeweler, so we’re set up to serve them as opposed to the big chain stores. Our customers are usually the better quality independent jewelers who are concerned more with quality of product rather than the cheapest price. We try to have the finest quality in any category.”

HH Gold still deals in all coins – modern, ancient Roman and Greek, and Spanish treasure coins. “We have a lot of customers who knew us from coin jewelry and now buy the diamonds by the yard necklaces as well,” Howard says. “We have a strong presence in the South and Midwest because we’ve had a lot of salesmen in those areas. We also did the Atlanta and Charlotte shows, as well as the Mid-America show in Columbus, Ohio, for many years.

“Besides coin jewelry, we get requests for special products, and sometimes those requests give us an idea to add a different line to our selection. Over the years, we’ve done things like high-end diamond belly button jewelry and medical ID jewelry. If a jeweler has a project that is beyond the skill level of their bench jewelers, they will send us a sketch or photo from a magazine as an idea, and we make it from that.

“We’ve handmade so much jewelry over the years that we’re skilled at custom-making anything,” Howard says. “We make engagement rings, frames for cameo pieces; whatever the jeweler comes up with, we can create them. If it’s a custom order, they’ll rely on us.”