Bill’s Jewelers thrives by staying true to a family promise

by Liz Pinson
Share on FacebookShare on Twitter
Reading Time: 10 minutes Bill’s Jewelers in Thomasville, Ga., has three driving forces that have kept the store growing every single year since it opened back in 1986.

One is treating your customers like family and providing the best service possible, making sure that all of their needs have been met. Next is don’t spend it until you have it.

The third is a little closer to the heart after founder Bill Wisner passed ownership of the store to his three sons (stepsons who the brothers consider their dad). Bill’s wife and the brothers’ mother, Jo Ann Wisner, was diagnosed with cancer two years ago. Before she died last year, she asked one thing: that the men put family above all else. It’s a promise that won’t be broken, one that keeps harmony in a family that still looks to Jo Ann for creative inspiration and calm.

“To be all guys here, all family, it’s pretty amazing how we get along,” says Jason Crawford, who was 12 when his mother married Bill in 1991. “We do it by having defined roles and taking care of each other. Mom worried how we’d get along, and I made her a promise a couple of days before she passed: That’s what we’re going to do; it will be family first. Nothing will come between us. And that’s how we honor her. We have our differences, but we hash it out and hug it out, and we move forward. The store won’t prosper if we aren’t building each other up. We’re constantly working on that and call each other out when we need to. It’s hard sometimes.”

Bill, who was born in South Dakota, had a long career in jewelry retail before opening his own store. After positions with Zales and Service Merchandise, he managed Treasure Hut stores in Atlanta, Tallahassee and finally Thomasville in south Georgia. He left Treasure Hunt to open his own store.

Thirty-two years ago, Bill’s was a very small store carrying “really basic stuff, low-end merchandise,” Jason says. “If we had a 1-carat diamond in the store, it blew our minds! We didn’t have much at all; it was mostly repairs, ‘while you wait’ – which is still part of what makes us successful. Although, the mission statement and store brand have evolved a lot since then to include a strong focus on custom work and bridal jewelry.

“My brother Jonathan is six years older, and when Mom began dating Bill, we started coming to the jewelry store,” Jason remembers. “We were country kids and had never been around jewelry. Bill took us in and we became family.” 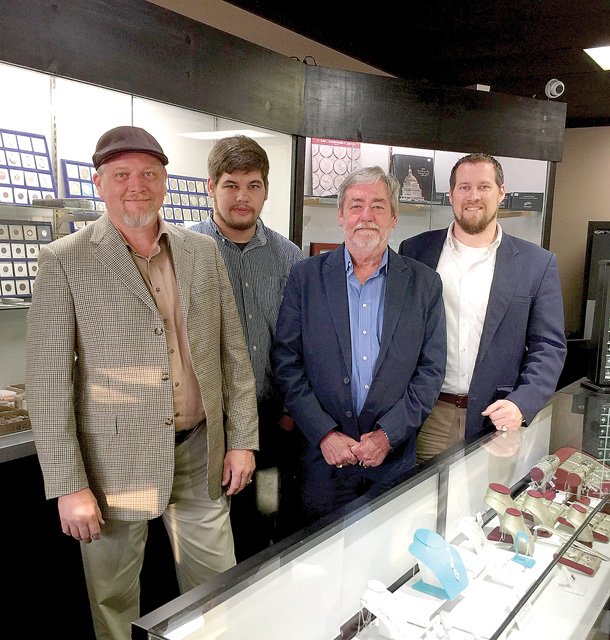 In high school, Jason was working part-time at another job when Bill asked him if he’d like to learn the jewelry trade. “I thought that would be really neat, so I quit my part-time job and in my senior year, 1996, worked here.” Jonathan started working at Bill’s a few years before Jason and in 1994 left to pursue his jewelry career elsewhere, returning from California in 2012 to re-join the family business. That same year, Garrett – who was born in 1995 – started working part-time in the store.

That year was a big one for Bill’s as the store also expanded into a second unit in the shopping center. Purchasing store fixtures and a safe from a store that was closing, Bill’s underwent a remodeling and doubled in size.

“Over the years we built our inventory and continued to invest in cutting-edge technology, with our mom pushing us to constantly make improvements . . . she pushed us to do better, and her persistence is instilled in us,” Jason says. “We’re light years ahead of where we used to be. We have a good inventory of designer and bridal lines, a lot to choose from. Also we buy gold and diamonds over the counter, and we have a case with estate pieces. It’s a fun case. A lot of our customers come in just to see what’s new in there, and the inventory changes all the time.”

The focus these days is custom design. “We’re known as the place in town to have something made,” Jason says. “We have a laser welder, Matrix CAD program and full in-house casting equipment . . . our custom work has just exploded.”

Advertising money is spent on local magazines, television and Facebook. “The response to sponsored ads has been unbelievable,” Jason says. “We did a promo for Valentine’s Day where we partnered with local businesses in town to do a basket. It’s a small town, but we still got 1,200 shares on this one promotion. We had 40,000 ‘engagements,’ people clicking and seeing. Boost-it ads on Facebook reach more people. Facebook is Jonathan’s forte, but if he’s busy, we’re both administrators.

“We also are committed to supporting local charities and nonprofits such as Lives Without Limits (which helps people with disabilities enjoy outdoor sports such as fishing and hunting) and Hands & Hearts for Horses (which uses horses as therapy for children with special needs). “We love to give back to the community who has given so much to us. Our hometown is amazing, and we love to help.”

“One of the things that’s amazing about our store is we are all family,” Jason says. “We all have a vested interest in this business, so our customers are going to get the best service from us. This is our livelihood. We have a meeting every week to discuss how we’re going to work more efficiently and better.

“We all share in certain duties such as sales and common bench repairs since we all are trained bench jewelers. However, we do have specific rolls within the company. I mostly handle custom work, intricate or difficult repairs, building rings and setting stones. Jonathan is in charge of administrative duties – making sure supplies are well stocked and the cases are full. He also handles most of our advertising and balances the cash drawer every night. Garrett currently handles the basic bench jewelry work, and he’s learning wax carving. The work he does gives me time to do the custom stuff. Dad referees between the brothers. He writes the checks and oversees some of the day-to-day operations. So we’re a fairly well-oiled machine.”

While staying on as manager, Bill made the three brothers co-owners earlier this year after witnessing their good work during Jo Ann’s illness.

“Our mom was the glue of the family,” Jason says. “She was an artist, a beekeeper and an organic gardener, and she was very talented. She’s where we got our artistic talent. She lived a year after she was diagnosed. It was hard, because we’re all family here in the store. So 2016 was tough for us, especially for Dad. He was out of the store for months to care for her. He saw during that time that the boys could run the shop. It was hard for him to admit we could, but he trained us well enough to do it. He saw the business was prospering and decided, ‘I’ll turn it over to you guys and be able to take some time off.’ ” 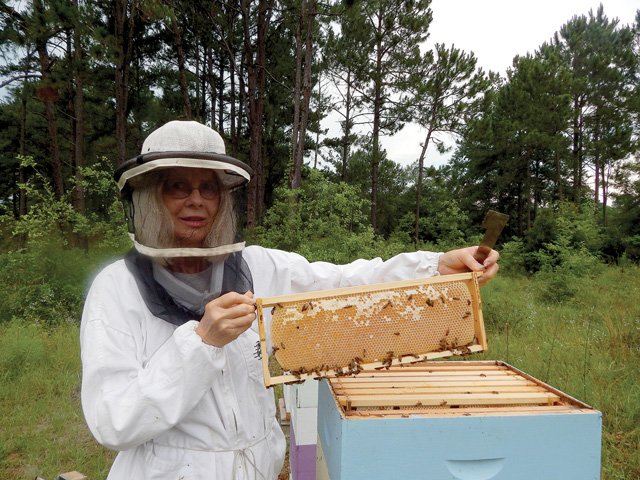 Along with honor, there’s a lot of pride in the family business. “In 32 years, every year has been better than the one before,” Jason says. “Sometimes not by much, but never less. We’ve always been very conscious of financial decisions, and we keep bills to a minimum. We save money, then pay for things. We’ve grown slower than we could have, but we never put the cart before the horse. As a result, we have steadily grown. We are proud of that.”