When the Charlottesville (Virginia) Regional Chamber of Commerce announced its 2009 Small Businesspersons Award recipient, not everyone was thrilled. Namely, winner Frances Loose, owner of Tuel Jewelers.

“This type of honor is not something she likes; she feels very uncomfortable with being recognized . . . she’s said before she wants her reward in heaven, not on Earth,” says her daughter Mary Loose DeViney, who works in the historic downtown-area business along with Frances’ other daughter, Frieda Loose-Wagner. The three women, who are all active in community affairs and civic organizations, shared the Chamber’s honor.

“Mom comes to work every day, and works hard, makes a living, goes home and has a nice family. That’s her satisfaction,” Mary says.

Mr. Tuel would spend three months of the year in Florida, and while he was gone, Frances would take charge. Mr. Tuel stayed with the store until he died in the late 1990s, Mary says, but he made good on his promise to Frances, handing over the keys in 1978.

“It sure was different then than it is today, that’s for sure,” says Frances, who is known for quietly helping others in her community. “We started out as a repair shop, really, before it became a full-service jewelry store. I was going to be a bookkeeper; that’s what I went to business school for.”

When Frances decided to work with jewelry, she learned the business from the ground up, traveling to classes in Roanoke and Richmond. “I mostly learned from Mr. Tuel,” she says. “We had four watchmakers at one time here, and I learned a lot from them.”

She also completed a number of Gemological Institute of America classes, becoming an expert in diamonds, colored stones and pearls.

While Frances came to work in the jewelry store, her husband, Herman, raised Black Angus cattle on the family farm. Daughter Mary worked for both, learning two distinctively different kinds of business – agriculture and retail.

“During the summers I was either on a tractor with my khakis and hat or I was working at the jewelry store in a skirt and blouse,” she says. “It was a wonderful growing-up experience.”

Sticking to Tradition
Tuel Jewelers is a traditional jewelry store, performing watch, jewelry and hollowware repair along with retail sales. One special item it offers honors President Thomas Jefferson, a keen intellect and designer who brought the domes to Monticello, the University of Virginia, and the capitols in Washington and Richmond. Jefferson also designed a pewter cup that if turned upside down looks like a dome.

Tuel Jewelers now reproduces the cups, in sterling or pewter.
“We sell those to tourists, but it’s also the traditional gift to give for retirement, graduation and weddings,” Mary says. “We engrave them; it’s the gift to give.”

Customer service and remaining a traditional jewelry store have been at the core of the family’s years of success, Mary says. “We still sell trophies, plaques and hollowware in addition to watches and jewelry. And we have a strong repair service for watches, jewelry and hollowware. When people aren’t purchasing, they’re repairing. We repair everything, from high-end to costume. Most customers have both.

And the golden rule applies: “We treat our customers the way we would like to be treated.” 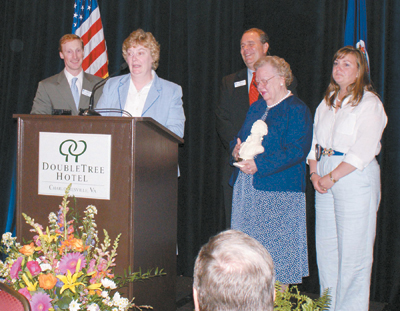 Mary Loose DeViney (at the lectern), along with (l-r) Frances Loose and Frieda Loose-Wagner
receive the 2009 Small Businesspersons Award from the Charlottesville, Virginia Chamber of Commerce.

The Big Award
The Small Businesspersons Award came as a huge surprise to Frances, Mary and Frieda.

“They tricked us,” Mary laughs.

Mary is a past president of the Chamber and currently serves on the board’s awards committee. She helped the committee choose another businessperson to honor this year, but, she says: “It was all a ruse.

“The day of the luncheon, I had not planned to attend,” Mary remembers. “But they said they wanted all past presidents to be there and convinced me to come. They called Frieda and Mom and said, ‘Mary’s going to win the award; you need to be there for her. You need to come support her.’

“So I’m there and committee Chairman Chris Lee says, ‘There’s been a conspiracy here, and we’re going to give the award to three people.’ He started talking about the matriarch of the business, and I’m thinking, we didn’t choose a woman. I’m sitting there thinking, Chris, what are you doing? Then he started talking about Mom, and about me. I was totally confused. Then Chris looked at me and grinned. I turned to a board member beside me and said, ‘But my mom’s not here.’ She said, ‘Yes she is, she’s in the back.’

“When Mom realized it was the three of us, she said, ‘I’m not going up there.’ But she did end up walking up with us to receive the award.”

Mary said an important part of the honor, for her, is knowing that “from this little place, many people have gone on to start their own businesses. They have all contributed to Tuel Jewelers’ success.

“This award really does go to the watchmakers who came before us, and the jewelers who have served Tuel Jewelers.”

On a personal note, Mary says, “My mom really does give. If there’s something she’s shown us, it’s to give without reward. What you realize is folks really do notice. People of the community notice we give.

“We derive our income from the community, so it’s important for us to give back.”

For more information about Tuel Jewelers, you can call 434-295-4258, send an e-mail to mloose@aol.com or visit the website www.tueljewelers.com.