What happens when you mix an amazing architectural talent with a passion for jewelry? Try an award-winning retail store that’s become a landmark in its community.

Christopher’s Fine Jewelry, located in Pawley’s Island, SC combines the best of high-end retail merchandise with a custom designed store reflecting the look and feel of its seaside community, and the combination brought them national recognition. But what really makes this father/son team tick is the long-established personal relationships with their customers. These connections may be the very thing that keeps Chris and his dad going during the difficult times. 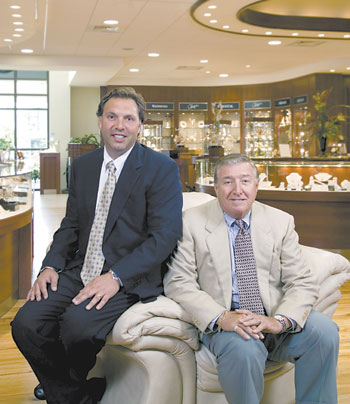 Owners of Christopher’s Fine Jewelry, Chris (l) and Louis Cervini. The father-son team have always wanted to be in business together.

Louis Cervini and his son Chris always knew they wanted to go into business together. Louis had an established, successful architectural business that he hoped his son Chris would one day take over. Chris worked in his father’s business throughout high school. But he had a change of heart half way through college, deciding that an architectural career was not for him.

“I decided to step out of the architecture business because I truly didn’t have a passion for it, even though my dad planned on me joining him,” recalls Chris. “But we still knew we wanted to go into business together. It was just a matter of finding the right business. So we started looking at our options.”

Chris and Louis discussed many options, including going into the oil business, but when that fell through Chris decided to investigate the jewelry industry. He went to work with the owner of a local jewelry school because he found it interesting. The two men worked side by side every day for a year, and that’s all it took! Chris had found his passion.

Wasting no time, Chris and his dad sought their jewelry mentor’s advice on the purchase of a jewelry store in downtown Georgetown, SC, but were disappointed at the advice given.

“He told us point blank not to purchase the store,” remembers Chris. “We were not discouraged however. He advised us to start from scratch. So we bought our own building on Front Street and opened Christopher’s Fine Jewelry in 1993.” 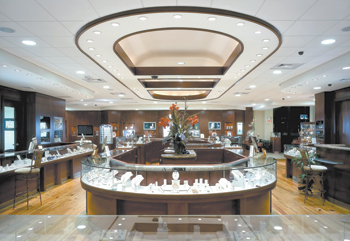 Chris, Louis and their mentor worked together to design the new store. The three men knew the look and feel they were going for and it wasn’t long before they’d developed an elegant, boutique jewelry store. Within 5 years the store was exceeding projected numbers. Christopher’s Fine Jewelry had established a name for itself.

But Louis and Chris refused to rest on their laurels. When their sales hit a plateau around 2000, the two men analyzed the situation and concluded location was their problem. With most of their customers coming from Pawley’s Island and the surrounding area, they decided to purchase land closer to Pawley’s Island off busy Highway 17.

“I feel blessed that when we decided to build we designed the building for three tenants instead of just our store. Now we’re landlords and we’ve brought in other businesses that complement ours. We have a lady’s clothing store and a salon, both of which draw customers that are compatible with ours.”

But it is the design of their store that has garnered much attention for them. Voted as one of the three Coolest Stores in 2006 by INSTORE magazine, the writer described the interior like this: “[Christopher’s] has built a tribute to nature…The inside of the store looks like the interior of a fine sailing ship and the light wood flooring feels like the water. Perfect for their location.”

To spread the news that Christopher’s had come to the island, Chris contracted billboard space a quarter of a mile from the store and, on the advice of a marketing colleague, started rotating the message on a monthly basis. Opting to go with funny catchphrases and large jewelry images, the people of Pawley’s Island have been treated to some creative sayings, like: “Because sighs matter,” and “When in hot water, apply ice,” or “Gentlemen, start her engine.” The island community can’t get enough.

“The community has embraced the billboards and they can’t wait to see the next one. They give us tons of feedback and, we believe, it is one of the things that sets us apart from other retailers.” 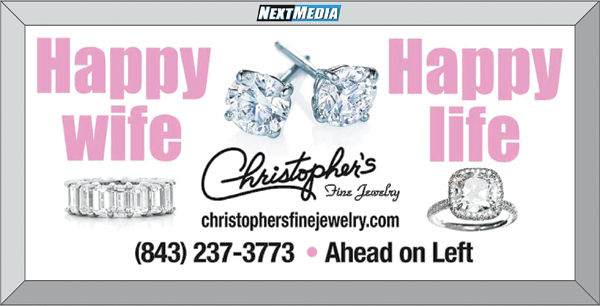 Christopher’s Fine Jewelry has brought a lot of attention to their store with their billboard marketing. Large jewelry images and frequently changed funny phrases have made them very popular in their community.

Chris and his dad find great satisfaction and strength in the long established relationships with their customers. Citing the relationships made as the most rewarding part of his business, Chris and father are an integral part of the Pawley’s Island community.

And the good news is that there are younger Cervini’s coming up who show an interest around the bench.

“I have two children, Isabella Grace (9 years) and Christopher Louis (7 years) and my son loves to get behind the bench and play with jewelry. He even mentioned our store to a cashier and she brought her fiancé to us for their engagement ring purchase. I guess that means Christopher Louis had his first diamond sale at five.”

Finding your passion can make all the difference in personal satisfaction and in the impact you have on those around you. Just ask Chris Cervini. He may not have taken the conventional route to get there, but he knew it when he saw it.