Ali Krebs may have been a novice, but what she cooked up in her kitchen has turned out to be hot, really hot.

Ali is the founder of Posh Mommy, a line of simple yet elegant jewelry that’s become a sensation in high-end maternity boutiques – along with celebrities. She started the business in her San Ramon, Calif. home, with her husband and two young children pitching in, but it grew so rapidly that she was advised to contact jewelry giant Stuller, Inc. It’s turned out to be an ideal partnership for both parties 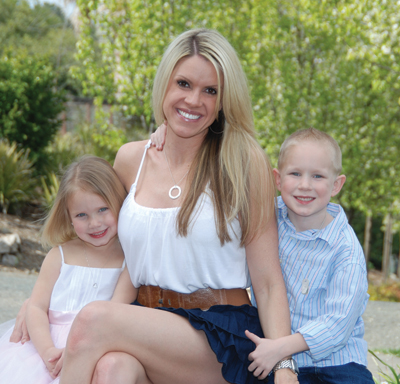 “Stuller has been amazing with my line,” Ali says. “It’s pretty exciting.

“I was a stay-at-home mom. I didn’t want to leave the kids, but I wanted to do something to help make extra money. When I first made like $300, $400, $500 more a month, I found that it really helped us. It helped us with groceries, helped us get by, and I was able to stay with the kids. I never expected it to get this big. It’s crazy!”

“Ali is a young mother who was not all that excited about what she was finding in jewelry stores,” adds Michael Clarke, vice president of finished jewelry for Stuller. “She wanted to have something that recognized her children, but she couldn’t find something that was satisfying for her.

“So she kind of fashioned something out of a silver disc, carved the names in it and put it on a chain. That started the ball rolling when friends said, ‘Wow, that’s really cool. It’s a little primitive, but very artsy and very cool.’

“She’s socially active; they know a lot of people – and it led very quickly to people saying, ‘I’d like to have that – why don’t you do that for me but put my child’s name on it?’”

Ali hit all the right buttons, Michael says. “Anything personalized is hotter than hotter than hot. First, it’s styled for the needs of the customer, and it’s personalized. Anything that has names or initials, can be engraved or has a name attached to it, it’s absolutely blazing hot. At these price points, and the fact that it touches on family and children and so on, we’re not surprised it’s been a runaway success. It’s huge. Absolutely huge.” 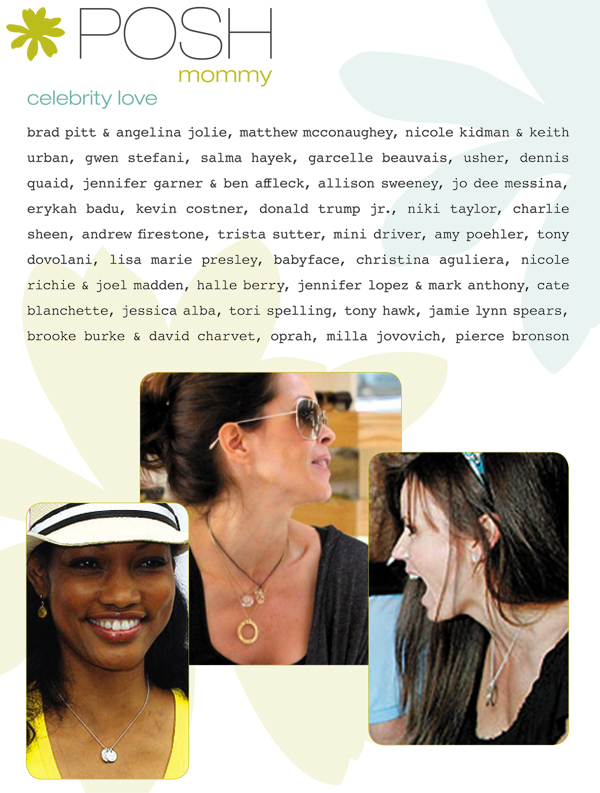 After Ali started making jewelry in 2007, she says, “I made a sample board and took it to a high-end maternity store in town. And that started getting the word to spread; we started getting calls.”

Ali first visited Stuller’s , offices last year. “One of the head executive guys said, ‘How long have you been in jewelry?’ I was like, this is it. There’s all these men sitting at the table, there were eight of them, and me. I’d flown back there by myself, the first time I’d ever left my kids. And I said, ‘Well, I just thought of it. I got the idea from another mom, and I wanted to make it different.’

“I thought it was cool that Stuller liked it, and they thought it was cool that I made it. The appeal, I think, to Stuller was that I actually invented the stuff. I physically learned how to set stones. That’s something different about us, that the stones are embedded. And my font (Bradley Hand) is all lower case, and that made it unique. It resembles a kid’s writing.

“I was scared a little bit to move to Stuller, because I wondered if people like my stuff because I physically make it, is that the appeal, or is it because of how it looks. So I had to make the decision to either stay small and keep hammering it, keep stamping it myself, or to make it something I’d fall in love with.

“I wanted it to be like when someone opened it, they felt like they were opening a Tiffany box. Like it was super high quality, high-end. And that’s what Stuller did for me.

“Every single step of the way, I started being more and more proud of the line. I do 14-karat gold now, and they set real diamonds, real rubies.

“The difference that Stuller gave me is in the quality of the product. I have my gold loop on now, with a diamond, and I’m in my workout clothes. I could go out tonight and wear that same piece. That’s the part that makes me so happy to be working with Stuller. It just takes it to the next level.” 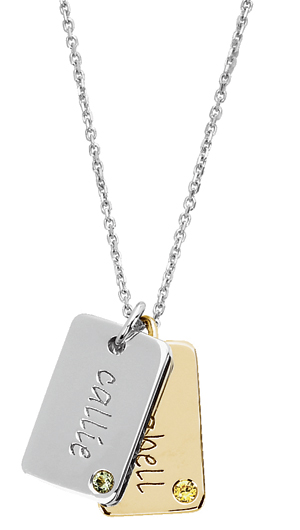 Stuller, one of the world’s largest jewelry sector suppliers and a just-in-time resource of finished jewelry, mountings, findings, diamonds, gemstones and more, offered Ali the luxury of one-stop shopping.

“Our facilities are such that we can produce the design of the artist, and they have artistic direction. It was a good opportunity for both of us – for her to spend her time talking to her customers and continuing to manage her family.

“As she says, she’s first and foremost a young mother. If her kids (now 5 and 4) need her at home, that’s where she is. Because she happens to be an overachiever, she manages to get it all done.”

Stuller does a little marketing for Ali, but she has her own public relations specialist and marketing interests. Stuller helps in terms of getting the product ready and getting it out, and taking new initiatives.

“For example, Posh Daddy is a very exciting addition that she added in late spring just in time for Father’s Day,” Michael says.

“We were not prepared for the tremendous interest in Posh Daddy,” Michael adds. “There’s not much out there, and the line is masculine enough that men feel comfortable wearing it, yet it has a romantic side. Dads don’t feel at all embarrassed to be wearing their daughter’s name on a metal pendant.”

Ali also has invented a line for kids.

Posh Mommy for Everyone

Posh Mommy enjoyed a sales spike this year when talk show host Ellen Degeneres featured the jewelry as a giveaway on her Mother’s Day show. “Ellen filled the audience with pregnant women,” Michael says. “One after another, the gifts kept coming out – baby strollers, formula bottles, diaper services. At the end, she said, ‘I want to show you something new on the market. It’s Posh Mommy.’ She also gave out gift certificates to all of the women in the audience to have their pendants personalized. It created a whole ruckus of activity!”

Posh Mommy now offers a variety of styles, including solid discs, hearts and dog tags. But Michael says the circle pendant is the most popular. “It looks like a flat bagel, and you can put three names on the front and the dates on the back,” he says.

Retail prices range from $33 for a silver pendant without a chain to $950 for 14-karat gold. At the wholesale level, Stuller offers a simple countertop display of seven pieces for $200, with no minimum purchase. “It’s very nice for the jeweler because they don’t have to invest in shelf stock,” Michael says. “Everything is guaranteed special order.” 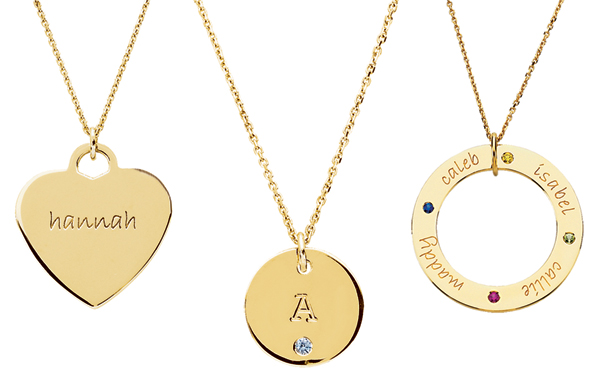 It’s important that the pieces “don’t look like they’re mass-produced with an anonymity that’s not right; it has to look like the artist was involved,” Michael says. “And we’ve been able to protect that for Ali.

“She oversees all the design. She’s asked us for help on certain things, but it’s more to do with how to technically execute certain pieces. Nothing gets approved, not so much as a chain choice or packaging, unless Ali personally approves it. She’s very hands-on.

“Stuller is very much in the background but now she’s asked us to put her on our site as well, and obviously we were happy to do that. Now, in essence we’re wholesaling it, making it available to our customers. She maintains her own site, as well, and her base of customers.

“I keep telling Ali she’s remarkably humble. She had a clear vision of what she wanted to accomplish, and she kept asking questions until she found the answers as to how to get it to market. She did that, and boy, a big hats-off to her.”

For more information about Stuller and Posh Mommy, you can visit the websites www.stuller.com and www.poshmommyjewelry.com.