On Friday, August 26th Eddie Christian and his daughter Ashley locked up the merchandise at Daughtry Jewelers at the end of a very busy day. Located 65 miles off the coast of North Carolina; their small town of Goldsboro, NC was bracing for Hurricane Irene’s landfall the next day. They took extra precautions to protect their merchandise and minimize damage, including unplugging computers, putting extra items in the safe and moving critical items upstairs to their 2nd floor. Located in Berkley Mall, neither Eddie nor Ashley expected a lot of damage. Despite the enormous size of the storm, which NASA satellite data indicated was one-third the length of the U.S. Atlantic coastline, Irene had already been downgraded to a category 1 storm and Goldsboro had weathered much worse. 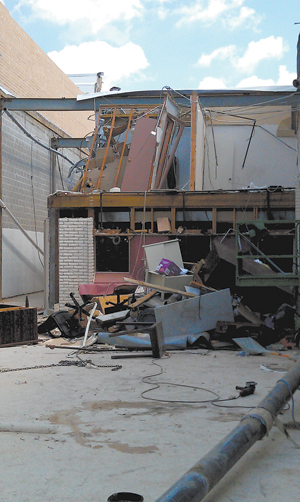 The father-daughter pair went home to finish storm preparations on their own homes, which they felt stood a greater risk of damage given the close proximity of trees and cars. But as Irene rolled in, her size became the most detrimental factor in what the New York Times estimates to be one of the 10 costliest catastrophes in the nation’s history.

“We’d weathered worse storms, including Hurricane Fran back in 1996,” recalls Eddie. “That’s when I lost 13 of my big oak trees at my house. At least this time I didn’t have to worry about downed trees as much!”

The next day Eddie received a call at home from mall security reporting extensive damage to his store. Finding his way out of his neighborhood was the biggest challenge with three out of the four exits blocked. Once he made it to Berkley Mall he pulled up to his store and saw… absolutely nothing. No glass broken, no visible damage to the outer front walls. Nothing.

“When I saw the store I wondered why they had called me to come down,” states Eddie. “Then the head of mall security took me aside and told me that my store was literally ground zero for damage done to the mall.”

Eddie opened the doors to his store and water rushed out. He couldn’t believe his eyes. What appeared in tact from the outside was completely devastated on the inside. Six to eight inches of water remained in the store. Cases were ruined, floors submerged, computers destroyed, pipes fell from the ceiling and everything was displaced. As Eddie made his way to the spiral staircase leading to the second floor he noticed a bright light. He assumed someone had placed flood lights upstairs, but as he hit the top step he realized that bright light was the sun shining through what once was his roof. 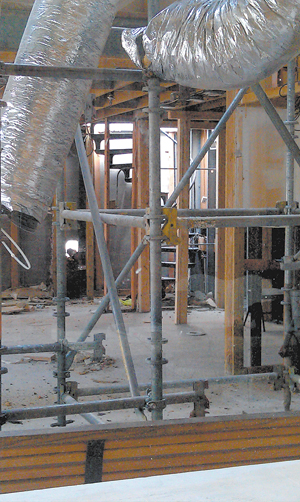 “When I took a first look inside the store it looked like someone had set a bomb off. Water had been trapped behind a fire wall and it was pouring out through the light sockets and running down the walls. Debris was everywhere and when I got upstairs I saw the sky. Our roof had collapsed and we lost everything. I mean everything.”

Eddie was so emotionally distraught that he couldn’t even drive himself home. Everything he’d worked for had been destroyed in the blink of an eye. He immediately contacted Jewelers Mutual whose prompt response helped him survive.

David Hyde, a Jewelers Mutual representative for the Southeast was shocked at what he saw: “It was pure devastation. There was nothing left. You could see blue sky from upstairs. We had to get a crane and cables to lift the safe right out of the top of the building. But Eddie was truly prepared. Many jewelers don’t insure showcases, furniture, fixtures, tools and equipment, but he did. That is such an important component to getting back to business.”

Eddie remained out of business for almost a month searching for temporary cases, signage, computers, repair tools, etc. before opening up a temporary location further down in the mall where damage was minimal. It took days to get the temporary space up to par, and with only Eddie and Ashley to scrub and paint and polish there was a lot of elbow grease effort needed just to open the temporary location. 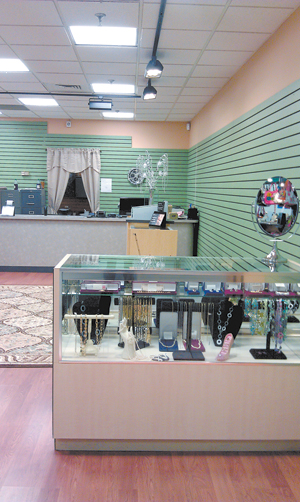 “We will rebuild and we will make it a beautiful place,” states Eddie calmly. “We lost everything, but it will be better than it was. This has been extremely emotional for us, from the very first phone call. But our customers are standing behind us and we’ll do whatever it takes to be there for them. ”

Daughtry Jewelers hopes to be back in their brand new store in February of 2012. For now they’ll make the best of the holiday traffic in a different, much smaller location until Santa brings them a new store.

(image right: Making the most of a difficult situation, Daughtry Jewelers has moved into a temporary location in another part of Berkley Mall that wasn’t severely damaged by Irene. They hope to have their old space repaired by February 2012.)