There’s the old saying that bad things happen in threes. Not so for Mike Doland, the former owner of Doland Jewelers with stores in Davenport and Dubuque, IA. He has three sons, each of whom have taken an interest in the family business he started in 1986. His sons (Will, 38; Nick, 36; and Lucas, 32) each manage one of the three stores and each has their unique set of skills that benefit the business.

Mike’s retirement began officially this year. In January his three sons purchased the family company from him and are now in charge. Mike plans on working in their stores during peak summer vacation times and the busy Christmas season. But with the exception of some occasional fatherly advice, Mike’s sons are running the show. 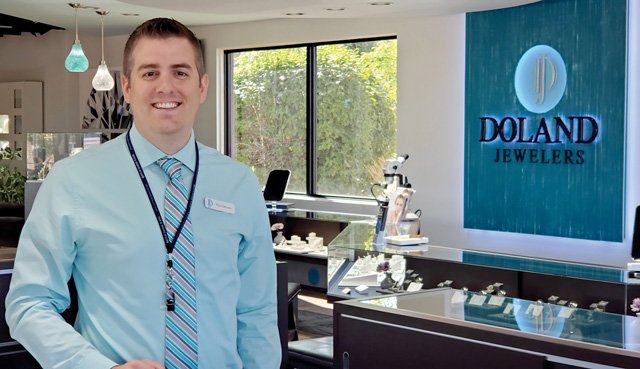 Will Doland at the Doland Jewelers store in Davenport.

“We were very lucky,” says Will, the oldest of the three boys. “My father brought us in early to the jewelry business, created and then fostered the interest in it, and always emphasized communications, transparency and trust with us – even if it meant making a mistake and learning from it. These are very rare qualities these days, especially in a family-owned business.”

The early years in any business are always filled with ambitious goals and stress-filled periods. Mike’s entrance into retail jewelry was no exception. Mike started out his working life as an art teacher. He went to college to study fine arts with an emphasis on teaching. During his college years, Mike needed to take a metals class within the art department at his college. This is what ultimately would be the vehicle for driving his interest in bench work and eventually owning his own store.

Mike started teaching art in 1975. During that time, his dedication and expansion of the curriculum is what the ambitious educator brought to his calling for the sake of the students. He even created an arts metals department at the high school where he taught. Despite good efforts and intentions, Mike’s teaching job was eliminated six years later.

With his sister based in Colorado Springs, Mike moved his family there and found work in a jewelry store. “I did the usual bench work of repairs, custom work and the like,” says Mike. “During this time I also earned my GG from the GIA.”

With some foundational experience under his belt, Mike moved back to Iowa in 1986 and opened a small jewelry store in Bellevue, IA – a small farming town of a little over 2,000 people. “It was a two-man operation,” says Mike. “It was me and a bookkeeper that could also handle sales.”

Coming from an unrelated field, Mike sought out help and guidance wherever he could find it. And, a quality Mike has been fortunate enough to possess throughout his career is surrounding himself with qualified people to help with the heavy lifting of being a small business owner.

The Bellevue store closed in 2002, but the time Will spent there as a child working for his father is the stuff of lasting memories. “I did the usual light maintenance when I was 12,” says Will. “But after a couple of years my father let me do some wax carving. At 14, I created a pendant design set with drusy and some small diamonds. My dad’s reaction of excitement and pride in my very basic design was the spark that ignited my interest in the family business.” 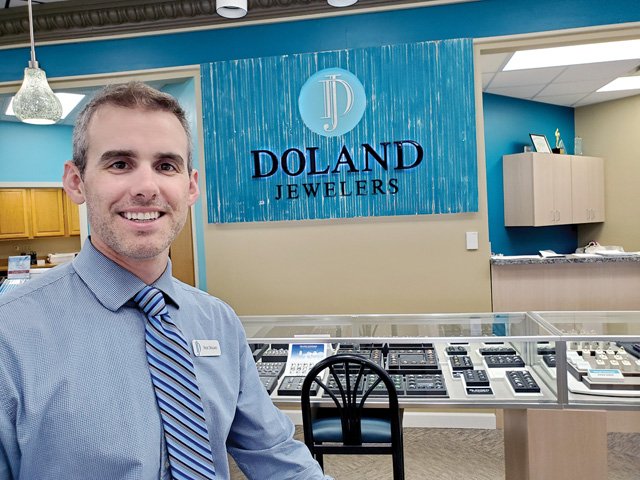 Nick, the middle child, entered the family business like his father. He always liked history and became a history teacher. After six years of teaching, Nick started to have a change of heart about staying in teaching. “Sometimes getting married and having a child changes a man’s perspective,” says Mike. “The family business offered stability and a good living, which is very important for any family. It was actually at the urging of Lucas that got Nick to come aboard.”

Similar to Will, Lucas demonstrated an interest in the family business at an early age. After completing his degree and industry certifications, Lucas started working in the business in 2006. As his sons became more involved in day-to-day operations, Mike started to see each son developing certain skills for managing a jewelry store.

“Will’s specialty is personnel,” says Mike. “He’s good with creating the corporate culture and identity and all the responsibilities of a human resources leader. Nick’s area of expertise is marketing and promotions as well as social media. And, Lucas is our numbers guy who is very good in Excel, working with spread-sheets and databases.”

As if getting all three of his sons into the family business wasn’t enough, Mike managed to leverage his one store in Bellevue then to three stores today, adding locations in Davenport and Dubuque – a store for each of his boys. The Bellevue store for Mike was a good start at a good time. But it didn’t take long for him to realize that he’d maximized as much business as he could from a small farming town. His years of experience, as well as business and industry connections, gave him the confidence to open a store in downtown Dubuque in 1992.

“Downtown then was a logical start to get name recognition in the community,” says Mike. “Eventually we made our way to our current West Side location in the heart of the city’s shopping district in a 3,000-square-foot store.”

Years later, Mike would have the chance to add to Dubuque’s retail jewelry landscape when a business opportunity opened up in 2012. Another independent jeweler had become critically ill and asked Mike if he was interested in buying the business. Not wanting the stigma of a jewelry store closing, or worse yet, a new competitor moving in, Mike and his three sons agreed to buy James Martin Jewelers, giving the reins of the store to Lucas. 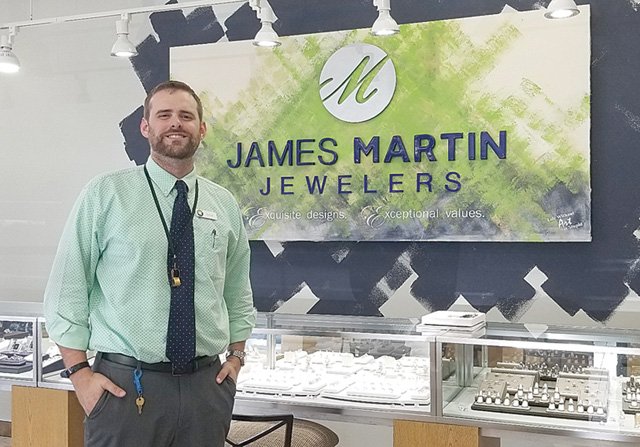 Lucas Doland at the James Martin Jewelers store in Dubuque.

“Customers shop at both stores and know that we own both,” says Will. “It’s not a secret here in town, but we don’t exactly shout it from the roof tops either.”

Across the street in Dubuque, Nick is the store manager of Doland Jewelers. Roughly 72 miles south, Will is managing the Davenport store. As Mike proudly states, each of his sons manage the stores successfully and contribute in numerous ways to the health and growth of the family business.

Like his sons, each store has different qualities that are contributing to the overall health of the family business, be it custom and repairs or the latest in jewelry fashions in finished jewelry. But one factor is common in the Mike Doland-created family business. His sons are thankful for the opportunities Mike’s hard work, and their mother’s unyielding support, has given them.

As new owners of the family company their short term goals are to own instead of rent. And, long-term succession plans for the third generation will start with baby steps once Mike’s grandchildren get a bit older.