With no serious injuries and a great attitude, owner can laugh 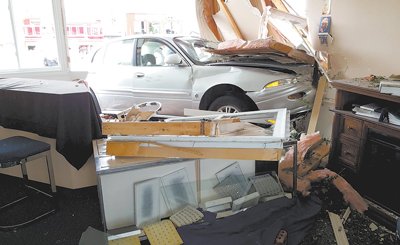 McCarty’s Diamonds & Fine Jewelry owner Bob McCarty was at home eating breakfast, looking forward to a routine day at his Evansville, Ind., store in late April when he got a jolting text from a friend.

“He asked me if I was OK, and I said what do you mean? He said I just went by your store and there’s a car in your store! You’d better get there! The police and everyone are trying to get ahold of you. About that time my sister called and said, ‘There’s a car in your building and it’s on fire!’

“So I ran to get ready and raced to the store. My house is about 10 to 15 minutes from the store. I think I made it in five! Come to find out, a 95-year-old lady had just left the bank and had come up around the corner from the exit of Walmart. She said she’d had mechanical failure, that the throttle had stuck. The people at the bank kind of corroborated her story; they said her engine was revving really high when she was there and it’s very possible that could have happened.

“So when I got here, there were three fire trucks, an ambulance, five or six cop cars and 10,000 people taking pictures! I walked up and they were pulling her out. She was sitting up on a stretcher and she was coherent, so that was a good thing.”

The accident happened about 9:30 a.m., which was fortunate because the store opens at 10 a.m. and no one was inside. It was a good thing, too, that Bob and his wife, Mary, were running late, as was a salesman who was planning to meet the couple at the store.

“Mary got here a little before me,” Bob says. “She called me on my way and her reaction was, ‘It’s bad, but it could have been worse.’ We were just like anyone else, in shock.”

The Buick LeSabre plowed through brick, siding, wood and drywall, landing in the engagement and wedding ring section, Bob says. “My wife and I are the only two who work in the store, and we both had errands and were running a little late; otherwise we would have been standing there. The sales desk area where we would have been meeting the salesman is right in that area, as well. 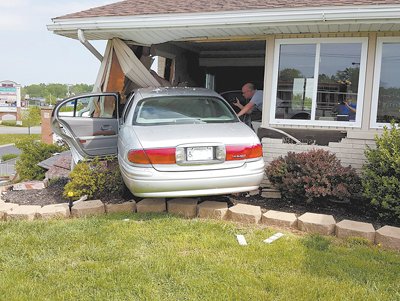 “No one was seriously hurt; the lady only had scrapes and bruises. She had about $100,000 worth of insurance, and we’re close to that with damages to the building and property. I had some stainless steel wedding bands, and it destroyed that case. I’d finally just broken down and bought a brand new computer and CAD system from Matrix and that’s another thing that got destroyed, my rendering stuff. I keep going back and saying hey, no one got hurt. It could have been worse; it’s just property damage.”

It could have been far worse. If it weren’t for the brick chimney, Bob says, “I think she would have gone right through the building and right down the hill. The chimney kind of stopped her.” The chimney, he says, is cracked and will have to be rebuilt.

“The amazing thing is that she was coming straight for my front door. She had the mind to veer to the left, so it took out the corner of the building. She missed the store’s sign; she was trying to miss everything. Police estimated she was doing 40 or 45 miles per hour when she hit the store.”

Bob took the story of his mangled mess straight to Facebook, assuring his customers: “This is how my morning went . . . how was yours . . . we are very lucky that everyone is OK including the 95-year-old lady that drove through our store this morning. We will be reopened soon and don’t worry ladies, we are working on all of your wedding rings for this weekend’s weddings.”

Facebook friends were gracious in return: “My family has been given permission to postpone my Mother’s Day and birthday shopping until you re-open,” one wrote.

Bob says honestly that the exposure has been good for his store. “We don’t do a lot of advertising; we’re a small store, locally owned. I’ll probably be three or four weeks out of business, and then remodeling on top of that,” he says, adding with a laugh: “I’ve heard a million and one jokes about opening up a drive-through jewelry store.” 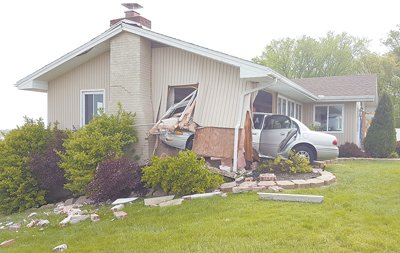 Seriously, Bob says, he just wants to get back to the way things were. He’d been in the location 10 years after buying the house and renovating it into a 2,500-square-foot store. “I’m still fairly new, so everything was nice. The brick in the front is hard to get so we may do stacked stone and change the look of the outside, but the store will look pretty much the same way.

“I don’t know if we’re going to be closed completely during the remodeling; we may just do repairs and things like that. To be fully open, it’s going to be a while. I have a great relationship with my customers, a great history with them. When we’re up and have a grand re-opening sale I hope they’ll show up and help me out.”

Bob has a word of advice to other jewelry store owners: “If you have a location close to a road, put large boulders in front of your store for landscaping. That’s what I’m going to do!”

For more information about McCarty’s Diamonds & Fine Jewelry, you can call 812-425-3916, visit the store’s Facebook page or send an e-mail to mccartydiamonds@aol.com.