Like many retail jewelry store owners, Josh Rider – owner of Dylan Rings in Montgomery, AL – wondered just how effective his social media efforts were… until recently. During the Christmas rush Josh received a ‘cry for help’ message from an Army National Guard soldier stationed in Iraq via Facebook. Thad Hutchinson, a Wetumpka, AL resident, wanted to surprise his wife Laurie with a Christmas present. But with only two days left before Christmas he wasn’t sure he could pull it off. 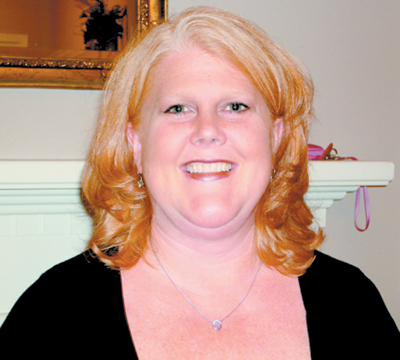 With the help of Dylan Rings, Laurie Hutchinson received a surprise Christmas gift from her Army National Guard husband, Thad, stationed 7,000 miles away.

As Josh read Thad’s message he was moved by the soldier’s desperate plea to “Please hurry!” Josh jumped online and quickly responded. The two men went back and forth, discussing details and reviewing product images until, in the middle of the online chat, they realized that Josh and his family attended the same church as Laurie’s parents. That’s when the light bulb went off.

“When we realized we went to church with his in-laws we started arranging the delivery side of the present,” recalls Josh. “It all just fell into place.”

Thad picked out a Yanni B New York pink sapphire and diamond pendant on a white gold chain. Josh agreed to wrap it and write the note from Thad to Laurie that said, “You may be 7000 miles away but you are never far from my heart. Merry Christmas Laurie, I love you.”

Now the two men needed to perfect the delivery. Thad wanted this to be a complete surprise to Laurie so Josh agreed to deliver the wrapped package to Laurie’s parents during his Christmas Eve service. Laurie’s parents quietly slipped the package into the branches of her Christmas tree without her noticing. It all went according to plan.

Josh laughs as he recounts how Thad really played it up to Laurie that he’d run out of time and that there just simply wouldn’t be any present for her.

On Christmas morning an unsuspecting Laurie Hutchinson was truly surprised when she found Thad’s gift sitting in the branches of her Christmas tree.

“It felt like we were getting engaged again,” said Laurie.

For Josh it was the best part of his Christmas season.

“It felt so good to be a part of this,” says Josh. “I worry that all the time I spend on Facebook on behalf of my business won’t pay, but it was really cool this happened. It wasn’t my largest sale but it definitely was the best!”

It wasn’t long after that Josh received a note from Thad reading: “That is awesome. Thank you so much. I was really sweating this. I even wrote her a really apologetic e-mail. Now she really will be surprised. Can you write a note that says: You may be 7000 miles away but never far from my heart, Merry Christmas Laurie, I love you. That would be great. Again, thank you so much. I really owe ya’ll big time!’

Being able to help the men and women who put their lives on the line for us every day is something we all wish we could do. Josh Rider was one of the lucky people who contributed in a meaningful way to a soldier far away from his wife and one-year-old baby girl at Christmas. It makes you wonder who got the better present.

Josh Rider started in the jewelry industry as a part-time delivery boy. His artistic nature led him to jewelry creation and, after completing his apprenticeship, he went into the wholesale repair side of the business. When he opened his own store in 2000 he decided to name it after his son, Dylan. Today Josh Rider takes pride in his hand carved bands and the variety of jewelry he crafts.

Thad Hutchinson serves as a military policeman for the National Guard. He deployed in the summer of 2010 and hopes to return this summer.