Eager to grow, INDIAM looks to the ‘best market in the world’

by Liz Pinson
Share on FacebookShare on Twitter
Reading Time: 7 minutesAmbitious and hardworking, the two entrepreneurs at the helm of INDIAM are looking forward to moving their diamond manufacturing initiatives into U.S. territory.

“We needed to move into a bigger market,” says Gaurang Gohel, who has been doing business in Antwerp, Belgium, for three decades. Even though the city is known as the Diamond Capital of the World, INDIAM has outgrown it.

“If you are ambitious, you have to expand,” Gaurang says. “Belgium is very small, and the jewelry market is not big; the sector is slowing down. In order to do something, to grow, I had to look to bigger markets to expand our horizon a little bit.”

Besides Belgium, the manufacturer of high-quality small diamonds operates factories and buying offices out of India, where Gaurang’s partner, Nishit Kothari, lives and works.

“This move is exciting, absolutely,” says Nishit. “The United States is the biggest, best market in the world to be in. It would be great to start by the end of this year. January is a very good season – if we can start by then it would be great.”

Both men travel between Belgium and India – and now they’ll be commuting to the United States as well. The exact location hasn’t been nailed down, but signs are pointing toward Chicago. “We intend to open an office there, but the weather is worrying me because it’s so cold,” Gaurang laughs. “It’s already too much here, cold and rainy, and Chicago is a step down weather-wise! But we will make our move, the sooner the better.

“We are testing the market, traveling to Chicago and trying to find a few salesmen who will sell our goods. We’ll see how that goes before we take a bigger step.” 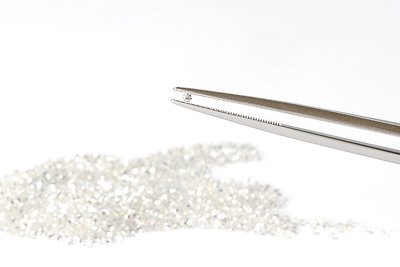 Gaurang grew up in India, surrounded by people working in all facets of the diamond industry. “I started in the business when I was actually in school, at 15 or 16 years old; I was always interested in the business. Even as I was studying engineering (at the Ghandhy College of Engineering & Technology in Surat), I worked in the diamond market. I liked it that much. I finished school with good marks, but didn’t want to pursue engineering – instead of following that career, I came back to diamonds.

“The first time I came to Antwerp, I was 19. At that age I was already doing well enough to come on my own to Belgium. If you come from a city where everyone is doing diamonds, that’s all you hear. It’s like Detroit and cars. You learn the business.”

Gaurang started out as a broker and trader. “It worked,” he says. “I doubled my business; it got better, I hired people, and my brother and cousin joined me. So it went on until the crash of 2008. My business suffered a lot, lost money, and it was really hard. My cousin had to go, and my brother had to go. Declaring bankruptcy was close, but I said no, I’m not going bankrupt. I’ll stick around, and that’s what I did.”

Gaurang persevered, cutting costs and changing his business model. In 2011, he partnered with his old friend Nishit, who had operated a company in Antwerp for 20 years before returning to India in 2006.

INDIAM will focus on retailers, Gaurang says. “The big trading is in New York and Los Angeles, and we’re not going to do that. We do want to focus on the retail market.”

Adds Nishit: “Every town has a lot of jewelers who are making high-end products, and we want to focus on retailers who like our quality and the things we specialize in.”

INDIAM has never delved into marketing ventures, preferring to build its clientele through handshake-type relationships. “I have always been a one-on-one, personal contact kind of person,” Gaurang says. “I’ve never done marketing. I’ve had enough to do, with plenty of customers, and I didn’t need to do marketing. I’m definitely looking forward to the same kind of relationships in the United States.

“We try to make a very individual connection. It’s like tailor-made stuff. I’ve always had diamonds that people wanted to buy from me.

“I like the repeat value, people who buy from you regularly, and people who think of you first when they need something. I always maintain my level of quality. After a few years, you may think, ‘I can relax; who cares?’ But I don’t do that. It’s strong quality control with me, all the time. People know they have a partner, and they don’t have to watch their back.”

“We are coming to the best market in the world,” Nishit says, “and people do need the kind of goods we offer. The future looks great.”