Experienced, professional staff instrumental to success of The Diamond Exchange

Many independent retailers make a name for themselves on the merchandise they carry, their creative marketing campaigns or their fancy retail space. But one Tennessee jeweler found a secret weapon for gaining credibility in the often overlooked and undervalued area of staff longevity. 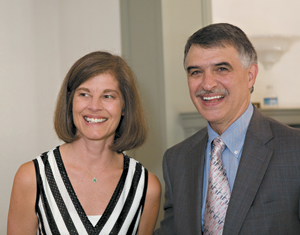 Dot (l) and Kim Frederick, owners of The Diamond Exchange in Kingsport, Tennessee.

Knowing he couldn’t be at both of his stores at the same time, Kim Frederick put his trust and confidence in the people he hired and discovered that, over time, his customers did the same. Seeing the same faces in his store that were with him when he opened almost 30 years ago is more precious to him than diamonds and gold.

Starting out in Kingsport working for Carlyle, Kim Frederick made his jewelry industry debut in 1976. After several years he was hired by a builder in Virginia and opened two independent stores. Learning the ropes from this hands on experience, Frederick discovered what to buy, when to buy it and how much to buy.

With three years under his belt, Frederick moved back to Tennessee to be with his wife, Dot, who was working in Kingsport. He found a silent partner and opened The Diamond Exchange in 1982. The Allandale Marketplace store quickly became a mainstay in the Kingsport area and in 1991 he opened a second location on Fort Henry Drive.

Frederick and his staff found that the small, blue collar population thrived on community connection. Nancy Harris, who was the first employee Frederick hired, stayed by his side as he added employees and a new store. She watched as her neighbors, friends and family all came through the doors looking for something special.

“Our customers are like family to us. They know us and we know them, so we’re able to pick out things that suit their tastes and budgets,” remarks Nancy. “We’re still serving the first generation that came to us so many years ago, and now their children are coming to us. It really is like a family because we’ve watched these children grow up. I love my job and you couldn’t find two better people to work for than Kim and Dot.”

Frederick began to understand the value of keeping the same people in front of his customers. He knew that in small town America it was just as important to build relationships as it was to be knowledgeable. 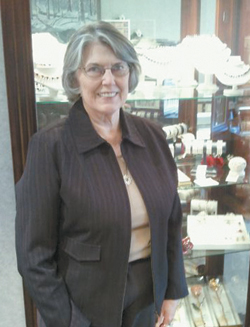 Nancy Harris was the first employee The Diamond Exchange’s owner Kim Frederick hired. “Not only has Nancy been dependable and helpful, but she has been our rock,” says Frederick.

“Not only has Nancy been dependable and helpful, but she has been our rock,” states Frederick. “We’ve continued to hire quality staff that has made The Diamond Exchange their career. We have a good reputation in our community, in part due to our staff. It’s very valuable for our customers to come in and see the same faces over and over again. They start to feel comfortable and don’t feel as if they have to see me every time. It’s a big compliment to my staff.”

Nancy isn’t the only long-timer on The Diamond Exchange’s payroll. There’s Sue who’s been on staff since 1983 and Bill joined the team in 1991. Dot, Kim’s wife, is another Diamond Exchange original since 1982 and the list goes on.

But don’t let the small town attitude fool you. Frederick and his staff know the value of change. Recently, the Fort Henry location moved into a remodeled building that was once a Pizza Hut. The redesign came with challenges when the zoning restrictions didn’t allow the footprint of the building to be changed. It was risky business.

Although The Diamond Exchange had been successful for years, Frederick admits to getting a little nervous at having to borrow money from the bank, his mother, his brother and taking a loan out on his house: “This was a big risk. I thought what if this doesn’t work?”

But it has worked – all of it! From the open area where customers walk in from the street, to the easy-to-access repair counter and the semi-private diamond area; Frederick’s big remodel has enhanced his staff’s ability to provide excellent customer service.

With a full-time bench jeweler and many GIA educated staff members, Diamond Exchange customers are keenly aware they will be served by true jewelry professionals. So much of the foot traffic is a result of the knowledge and expertise of Frederick’s staff.

But, at the end of the day, to run a successful store Frederick knows you have to LOVE what you do.

“You have to love gemstones and jewelry, and show the customer it’s not just another piece of jewelry. They pick up on your enthusiasm and they buy into it. It’s got to be something you enjoy. We point out the beauty and meaning of the piece,” states Frederick, “and it never gets old.”