Artificial Intelligence (AI) is no longer a futuristic concept. It’s more a part of people’s daily lives than many might think, ranging in uses from voice and face recognition capabilities on smart devices to commonly used transportation apps (Uber and Lyft). Commercial applications of AI have been advancing and evolving as well with diamond companies and gemological labs using AI to create diamond grading documents. 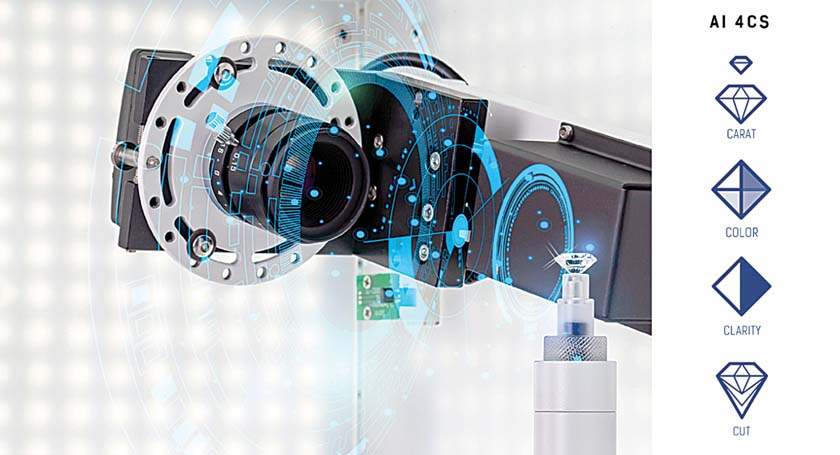 AI-assisted diamond clarity grading was announced in August 2020, by the Gemological Institute of America (GIA). GIA has been working on AI-assisted grading for roughly five years with progress and activity in this area of research ratcheting up in the last two to three years, according to Tom Moses, GIA’s executive vice president and chief laboratory and research officer.

“Right now, the AI-assisted diamond grading accuracy is at about 90 percent compared to experienced graders,” says Tom. “We will continue to refine the smart software to achieve greater accuracy and repeatability. AI precision is only as good as the quality and quantity of data. GIA’s strength is in being the creator of the 4Cs and the International Diamond Grading System, and working with IBM to make sure that accuracy and precision get into the algorithm. GIA will begin to produce AI-assisted diamond grading documents for the trade in the first part of 2022.”

GIA has teamed up with IBM, a leader in AI technology since the 1990s, according to Tom. Of the 4Cs, GIA started with clarity. “The most challenging of the 4Cs,” says Tom.

A common misconception is AI is a technological pursuit that is only a few decades old. The abridged version of AI’s history is the technology’s advancements and evolution ran hot and cold over the years until Congressional funding, market forces and computing innovations in the 1980s allowed AI to demonstrate marked advances – especially in the US and Japan.

In the 1990s, semiconductors began to change everything. “AI has been with us for many decades,” says David Block, CEO of Sarine Technologies. “The ability to teach a machine to learn can only be done effectively, quickly and efficiently with large amounts of computer processing power and storage capabilities.”

As far back as 2015, Israel-based Sarine Technologies began developing AI in diamond grading. Since 2018, Sarine’s AI-assisted diamond grading technology has advanced to the point of being fully automated with very little human intervention in producing a diamond grading document.

Founded in 1988, Sarine Technologies has vast amounts of gemological data; approximately 100 million rough and polished diamonds pass through its technologies each year. This large amount of compiled data was the initial step. Next was to create AI diamond grading integrated with the GIA’s essential grading standards. “The GIA’s standards are globally accepted and therefore are the basis for our technological based AI grading,” says David.

For Sarine, human involvement with the AI diamond grading process involves loading the diamond into a scanning machine for evaluation and identification. From start to finish, grading a 1-carat diamond, for example, takes just a few minutes. The resulting document has all the commonly used grading language and diagrams known to the industry to evaluate a diamond’s unique qualities and characteristics. Going forward Sarine will be adding additional data not currently available on existing grading reports that will enable more efficient trading of polished diamonds.

At GIA, the Institute’s current AI technology has a 90 percent accuracy rating and is growing in efficiency. GIA’s AI-assisted diamond grading system, however, will default to human intervention if the smart software cannot offer a conclusive gemological evaluation on a diamond’s clarity. Tom foresees less human intervention as GIA’s technology advances.

AI-assisted diamond grading and identification is part of the diamond evaluation process at this stage. And, according to Tom of GIA and David of Sarine, the evolution and applications of AI in the gemological sciences will only continue to expand in its capabilities and applications. At this stage, however, there is a call for incremental steps in utilizing AI in diamond grading.

Don Palmieri, president of Gem Certification & Assurance Lab, Inc. (GCAL) has a history of investing in technology to improve its product offerings while maintaining the consistency and accuracy of the lab’s certificates.

“Any technology that can elevate the consistency and accuracy in diamond grading amongst the global labs, resulting in more honest and transparent transactions with consumers would be a welcome addition to the industry…and GCAL would embrace it,” says Don. “For us to further invest in AI, the company/manufacturer must prove to us that the equipment is accurately programmed, has been extensively tested, and that it gives us the same confidence we have in our graders to provide a financial guarantee of accuracy to the consumer for every diamond we certify.”

With AI and advances in automated grading, Don foresees his lab utilizing the technology to be able to expand GCAL’s sought after services to other parts of the world, establishing locations in diamond centers other than New York.

“Labs, including GIA, are already using automated color classification instruments,” says Don. “We have tested such instruments for decades, including one currently. To date, there is not one instrument we have tested that is as consistent or as accurate as our gemological expert graders. And our biggest fear is that any technology can be manipulated, by the producer or user, especially with on-site grading.  When that happens, will the seal of ‘AI Automated Grading’ provide cover?”

AI diamond grading is becoming more mainstream for finished goods. As the technology advances, its applications further back in the diamond supply chain have already come to the forefront. “The capability to use AI technology in advanced evaluation of rough at the mining site and in the factory isn’t that far away,” says David.

And, in the not-so-distant future retail jewelers could use desktop AI grading systems to identify a certain range of diamond qualities the store owner wants to sell to its customers. “Using AI to grade diamond enables ‘teaching’ our technology to grade diamonds according to different grading standards,” says David. “Even though we have based our grading on the GIA standard, we are also adapting our system to other leading grading standards, such as announced in 2019 regarding the adaption of our technologies to the Tiffany grading standard.”

Addressing consumer confidence is a guiding goal for all companies and gem labs working with AI to grade diamonds. “For the consumer, AI will help grade more diamonds faster and with greater efficiency,” says Tom. “Moving upstream, it’s not out of the realm of possibilities for an AI diamond grading system to be installed in a diamond manufacturing facility with GIA gemologists in Carlsbad [California] or New York overseeing screening in real time.”