Downtown Minneapolis is famous for many reasons, chief among them the skyway system that connects a number of buildings spanning a good portion of the busy business area. People that live and work in downtown can actually walk the skyway system from their condo to work without ever stepping on a sidewalk.

This impressive and extensive system of pedestrian traffic is a quality of downtown Minneapolis that Gittelson Jewelers has tapped in to since 1985. That’s the year Gene Gittelson, first-generation jeweler and CEO of Gittelson Jewelers, opened his store in the Northstar Center building. This building boasts of the oldest existing skyway connection, constructed in 1963.

Gene worked for National Jewelers in downtown Minneapolis for two decades. Twenty years is plenty of time to learn the ropes of retail jewelry and how to best serve a thriving downtown mainly working population.

“He knew it was time to find a fresh start and he scouted the downtown area for several months when he stumbled upon a busy little corner store in the Cargill building downtown Minneapolis,” says Michael Gittelson, second-generation jeweler. “That’s when Gittelson Jewelers was born, August 8, 1985.”

Seventh Street is one of downtown’s busiest streets, with business by day and recreation by night. Gittelson Jewelers was known as the “quaint little jewelry store on 7th Street” for most of its history there, according to Michael. Large companies such as Wells Fargo called Northstar Center home. But like most central business districts, downtown Minneapolis has changed over time, including the building where Gittelson Jewelers got its start.

“After 36 years it was time to relocate,” says Michael. “The building was going through several renovations and it was time to move on. We were actually the last tenants to go in the building.”

A key to success to a business move is being as close to the original location as possible. Michael and Gene moved one city block away into the Six Quebec Lofts on Marquette Avenue, home to many well-known businesses. But the most important quality of the new location is the building’s connection to the skyway system.

The importance of remaining connected to the skyway system was vital to Gittelson’s seamless transition to a new location and the future of the family-owned business. The skyway system is a critical network for downtown workers commuting from their place of work to other places of interest and commerce.

Perhaps the biggest misconception of the skyway system is that it was built to escape Minnesota’s bone-chilling winters and soul-crushing hot summers. Pedestrian safety was a chief concern for city planners in the early 1960s and skyways added value to properties in downtown.

In 1974, when the 52-story IDS building was completed (the tallest building in downtown Minneapolis and one of the tallest buildings in the five-state area – Minnesota, Iowa, Wisconsin, South and North Dakota – it solidified the skyway system’s place in the downtown area.

Minnesotans are so enamored with the skyway system that the 1980s music sensation The Replacements (formed in Minneapolis) included their song “Skyway” on their “Pleased to Meet Me” album produced in 1987; two years after Gittelson opened its doors.

An enterprising husband, for example, could buy a piece of jewelry, pick up his dry-cleaned shirts, shoes shined and lunch to go all in 30 minutes. This is the commerce-driven, skyway-enhanced foot traffic Gittelson has benefited from for nearly four decades. 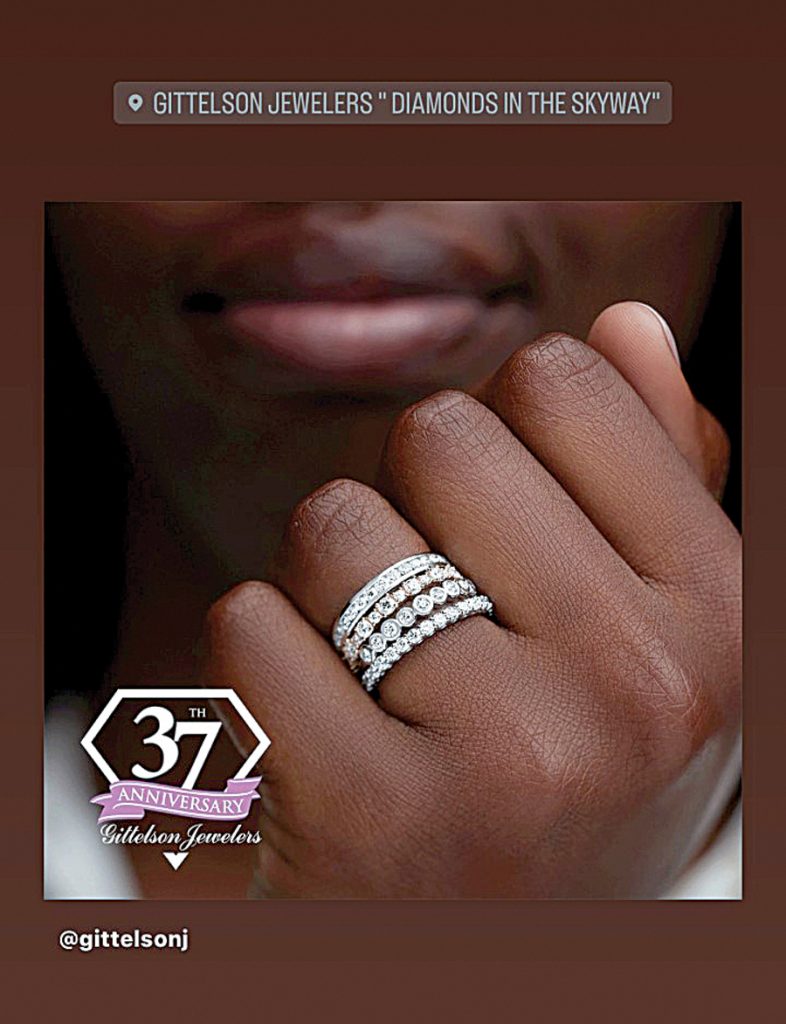 The move also gave Gittelson much-needed additional space. Being “quaint” was okay for many years. But the June 2022 move took Michael from a 298-square-foot store to a 700-square-foot retail space.

“We have been able to source more inventory and continue to provide great customer service,” says Michael. “And, the accessibility is by far much better.”

And, after the COVID downturn in business, the relocation has been a tremendous shot in the arm for sales growth. “Since we opened [the new location] in June, each month we have seen an increase of traffic,” says Michael. “New businesses are relocating downtown and we are seeing and meeting more and more people each day.”

Accessibility from the skyway system is great for foot traffic, but Gittelson Jewelers is also quite visible from the busy business goings on that makes Marquette Avenue prime real estate in downtown Minneapolis. “We do plan to have a lighted sign in the near future” – visible on busy Marquette Avenue, said Michael.

The most recent holiday season was Michael’s first Christmas in the new store. He decorated for the holiday season with street visibility and skyway accessibility in mind.

A move has a cleansing effect for jewelry stores. Michael was able to sell-off aged inventory while making space for new jewelry for new and existing customers. Like all moving sales, customers enjoyed deep discounts while Michael benefited from a successful and traffic-driving store event. And, the grand opening in the new location was a great excuse for another party.

Many retail jewelers have moved out of the central business area, making Gittelson Jewelers one of the “last jewelers standing” in downtown Minneapolis, according to Michael. Exclusivity has its perks.

Plus, fresh starts have a knock-on effect for other parts of a jewelry business. Michael decided to launch a brand new website in time for the holiday season. As a jewelry retail hold out in downtown Minneapolis, Michael remains very optimistic about the future.

“The future is bright for Gittelson Jewelers,” says Michael. “We will continue to custom design jewelry, offer full service repairs and continue to carry the latest trending and classic designs in jewelry.”