For a 6.04-carat diamond, the pleasant passage of commemorating a milestone moment in a customer’s life was abruptly interrupted when a diamond-set ring was stolen from Old Northeast Jewelers in St. Petersburg, Florida. After more than a year of online searches, phone calls and tenacious follow-ups with authorities, store owners Jeffrey Hess and his wife Katrina found and eventually recovered their store’s lost treasure. 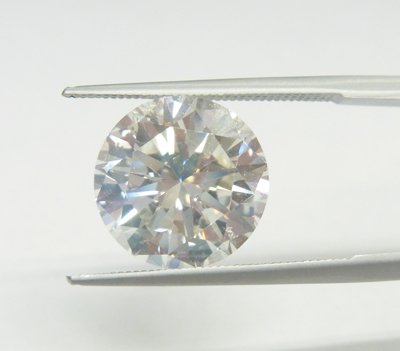 The store owners clearly recall the day the diamond was stolen. It was the afternoon of September 30, 2013, when four sales associates were scheduled to work. Two left for lunch breaks leaving only two sales associates remaining on the showroom floor to service customers. That’s when two men and one woman that were casing the store saw their opportunity to “invade and conquer the sales associates,” says Jeffrey.

“The three of them moved from case to case wanting to see a lot of jewelry and stopped at our store’s high-value case,” says Jeffrey. “The sales associate showing jewelry to the thieves left the case open for a short time. During those moments, the phone rang distracting the other sales associate. That was when they took it.”

The massive loss was discovered almost immediately. Local police were contacted, reports were filed, and dealing with the aftermath of the brazen theft was the new store policy priority.

Jeffrey and Katrina reviewed the store’s video footage with their staff pointing out the vulnerabilities that gave the three thieves their golden opportunity. Security and loss prevention training for the store’s staff soon followed and the sales associate that was a victim of the theft was placed on probation.

Ever the optimist, Katrina gave Jeffrey heartfelt assurances only a wife and business co-owner could offer. “The diamond will come back some day … have faith.” Jeffrey appreciated the encouraging words, but for him actions spoke louder.

After some initial inquiries with local and regional authorities, as well as the Jewelers Security Alliance (JSA), the Florida couple soon realized they were victims of a highly organized crew working the Eastern seaboard (including New York City) and pockets of Southern states. A 6.04-carat diamond is a precious gemstone of exceptional size and quality. Like most jewelers in possession of such a unique treasure, the large diamond had two diamond grading reports – one from the Gemological Institute of America (GIA) and the other from the American Gem Society (AGS).

The GIA diamond grading report stated the 6.04-carat diamond “L” in color with a clarity rating of “SI1.” But the most unique, and ultimately the most helpful method of later recovering the diamond, was the internal features plotted on each certificate. “Each grading report had an identical plot of three inclusions that formed a triangle,” says Jeffrey.

That signature feature, plus the 6.04-carat diamond’s other characteristics, were Jeffrey’s searching criteria when he took to the Internet shortly after the theft. Jeffrey was a man on a mission with daily online searches, combing through social media, diamond sales and auction websites. After about 45 to 50 days the daily searches turned to weekly, and then monthly pursuits. Jeffrey had nearly given up hope of finding his diamond.

Six months after that fateful September day he decided to go online and have another look for the diamond. Much to his surprise, he found a 6.04-carat diamond with a grading report stating the gemstone was “I” in color with a clarity rating of “VS2” that was a match to his stolen diamond. The diamond’s specs were very similar, but it was priced at $130,000 – substantially more than the original retail tag of $80,000. Jeffrey remained undeterred.

The website where the diamond was discovered had a downloadable diamond grading report feature. Jeffrey saved the PDF file to his hard disk, reviewed the document carefully and soon discovered many similarities. “From matching crown angles and other vital measurements I knew in my gut this was our diamond,” says Jeffrey. “But that inclusion plot that formed a triangular pattern iced it for me.”

Heady with the excitement of the online discovery, Jeffrey soon realized that after six months of online searching the miraculous discovery was the start of a much more daunting task, how to safely and securely get the large diamond back to his store. That’s when Jeffrey contacted an industry friend of his based in the midwest to contact the New York seller.

The diamond in question was in the possession of a dealer located on 47th Street in New York City, a business owner who was not “unknown to controversy,” says Jeffrey. After conducting diamond forensics with the GIA, Jeffrey and other experts were certain this was the diamond stolen from his store. This provided enough evidence for the Manhattan police, the FBI and JSA to aid in recovering the large diamond.

After a police visit to the New York City diamond dealer, it was discovered the large diamond had undertaken quite a journey. After the theft, the diamond was sold to a South Florida dealer. The diamond changed hands when it was sold to the New York dealer who then sent it to an Israel-based gemological lab, which many industry members consider soft on accurately grading diamonds, according to Jeffrey. With a new, more favorable diamond grading report the 6.04-carat diamond was uploaded to a popular industry diamond sales website for sale, which is where Jeffrey discovered his diamond in early 2014.

At this point, Jeffrey and Katrina assumed that their diamond would undergo the usual regimen of investigative police work and then be returned by bonded courier to their store. That wasn’t the case. For whatever reason the diamond was held up in a Manhattan police evidence room for some time. That’s when Katrina went into action.

“We had made several phone calls to the police asking for the diamond to be returned, but they kept telling us it needed to stay in the evidence room,” says Jeffrey. “But a diamond of this magnitude should not be held in an evidence room. We don’t know how secure it is.”

After nearly eight months of firm phone calls from Katrina, the couple’s large diamond was finally returned to their store in late February. And, like all tales of arduous journeys, this one has a happy ending.

With the diamond safe and secure in the store, security procedures in place after the wake of the theft have resulted in airtight loss prevention. The seasoned sales associate that was the victim of the theft is off probation. The 6.04-carat diamond is routinely shown to interested buyers.

“Given the notoriety of the diamond and its recovery, many people know its story,” says Jeffrey. “But for those that don’t, we don’t bring it up in a sales presentation.”

The 6.04-carat diamond was a significant recovery for JSA. The group’s vice president Scott Guginsky credits Jeffrey for his tenacity, New York Police Department’s Organized Theft Squad for itd unwavering legwork, the NYPD’s work with Tampa police and other law enforcement agencies as well as the GIA labs. The only unhappy portion of this story is the thieves are still at large, but the investigation is still active.

Additionally, Jeffrey advises retailers to get more than a single grading report for substantial diamonds and never give up. “A smart thief would have re-cut our diamond to avoid detection,” says Jeffrey. “Not all thieves are that smart and greed got the most of them in the end.”