When a neighboring strip mall space opens up for a retail jeweler many opt for some showroom expansion. Stephen Shannon, owner of Stephen Shannon Jewelers, decided to do things a little different. The Fort Wayne, Indiana-based jewelry store owner opened a jewelers’ academy.

Once a frame shop and then a bakery, Stephen decided it was time to convert the 800-square-foot space next to his store into a jewelers’ academy so aspiring jewelers could make dough in other ways. In March the space became available. Four months later Midwest Jewelry Academy (MJA) opened its doors. Applications for MJA are currently being accepted.

“My goal for MJA is to succeed in providing training to as many students as we can in an effort to introduce them to an ever-growing industry that is in desperate need of good, well trained jewelers to fill the thousands of jeweler positions out locally, nationally and indeed globally,” says Stephen.

Similar to the jewelry store that bears his name, MJA is all Stephen. “MJA has been solely funded by Stephen Shannon Jewelers LLC, which is its parent company,” says Stephen. “In other words, out of my own pocket.”

As Stephen and many industry members will attest, the demand for jewelers is at an “all-time high” and that there’s “no time to waste” to usher in the next generation of bench jewelers. Industry executives of jewelers’ equipment companies know this better than most.

“I’m heading up this project on my own initiative with tools and materials provided by Stuller,” says Stephen. “I have also collaborated with Rio Grande. As a member of Rio for Schools Educators, MJA students will be able to access all Rio Grande has to offer at wholesale pricing.”

The creation of MJA certainly will help the industry with new jewelers. And, it appeals to some of Stephen’s professional goals as a life-long jeweler. But the Academy’s creation also facilitates Stephen’s succession plans to hand the family jewelry business over to his children while he teaches at MJA.

Stephen has a lengthy history in the jewelry industry. Impacted by company-wide restructuring layoffs at International Harvester, Stephen’s father pursued his fondness for jewelry by applying for a job at a jewelry store. In time, he became comfortable with sales and quickly learned day-to-day operations. In 1979, Stephen’s father opened Shannon Jewelers. 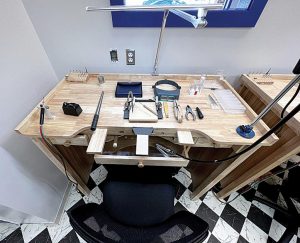 With his father managing sales, Stephen instinctively gravitated to the jewelers’ bench. Over the next three decades Stephen worked with his father. His departures from the family business included enlisting with the US Marine Corps, creating his trade business called Yours Alone Gold, and taking jewelry positions with other jewelers when needed.

He also time spent working at Ridco in Black Hills, South Dakota, and worked as a design and service manager for Signet/Sterling Jewelers. Stephen also earned his master jewelers certification through Stewart’s International School for Jewelers in 1997. Shannon Jewelers was in business for 32 years. In 2014, Stephen’s father retired. Three years later Stephen opened his jewelry store.

Decades of bench jeweler work uniquely positioned Stephen as an industry expert possessing the capabilities and expertise to pass on his knowledge and experiences as a master bench jeweler. When MJA was transitioning from concept to creation, Stephen was pleased that his life’s work would allow him to finally combine his two passions: bench jewelry and teaching. He will be MJA’s main teacher with other instructors helping as needed.

MJA will “follow suit with most other schools,” says Stephen, with regards to curriculum. There will be courses in jewelry repair, diamond and gemstone setting, jewelry design and production, and a 15-week master jeweler course. Tuition will be $1,395 per course, which includes all tools and materials. MJA will even provide students with optivisors. The school will only admit six students per course to allow for better hands-on instruction.

The Academy will differ, however, in some regards. Stephen is also introducing “targeted training” course work for those looking to improve on or hone certain bench jeweler skills.

“For example, those who may be struggling with torch control, high-production techniques, shop set-up and management, trade repair to increase productivity and repair sales as well as repair sales training, or maybe they struggle with different types of metals,” says Stephen. “These three-day courses will be just $500, which includes a targeted skills assessment and certificate of completion.”

As with any institution of learning there’s always a focus on the next generation of students. In January 2023, Stephen plans on launching Junior Jewelers of America (JJA). The program is designed to introduce children, ages 10 to 14, to bench jeweler work. The goal of the program is to introduce as many people to the gem and jewelry industry as possible.

“JJA will provide real-world training for a real future,” says Stephen. “We will donate our time and materials at no cost, with evening and weekend classes, to teach our students all about gemstones, jewelry history and jewelry design with specific projects to build their skills and knowledge. All our students need to do is register for the program with parents’ consent and they’re on their way to a possible career or as extra income.” 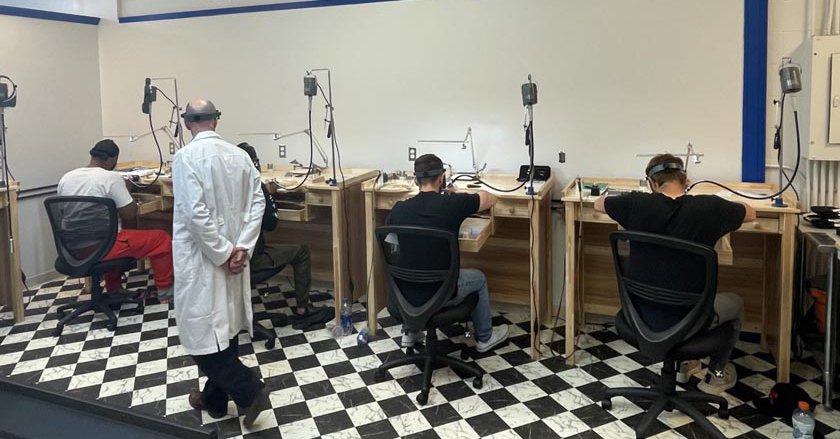 MJA may still be in its infancy, but Stephen is already looking ahead at the future. In the coming years he would like to expand the per-course number of students from six to possibly 12 to 15. But for now, Stephen’s goal with MJA is to: “introduce and instruct as many as we can to our industry.”

For more information about the MJA, visit MidwestJewelryAcademy.com.