A jewelry store’s history is a lengthy one when the end of America’s Civil War enabled it to get the start needed to develop a thriving business. That’s just one of many historical moments in the 155-year history of Sedalia, MO-based Bichsel Jewelry. 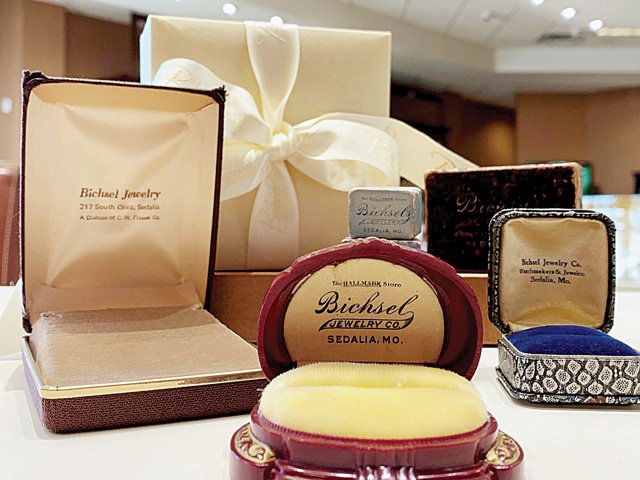 Bichsel Jewelry boxes over the years provide a glimpse into the past.

Store owner Mark Callis considers himself fortunate enough to have begun his retail jewelry career at age 24 at one of Missouri’s longest continuously-run businesses. “I was hired to manage the jewelry store in 1978,” says Mark. “The great-niece of the original owner sold the business in 1969, which meant the Bichsel family ran their store for 104 years. To have a connection to such a history is remarkable.”

The expansion of America’s railroads is at the heart and the start of many American towns and cities. Sedalia is one of those cities. The railroad was also responsible for creating many jobs, some earmarked for immigrants with much-needed skills. That was the case for George Bichsel, who was brought to the US from Switzerland to work on the railroad’s many station clocks and conductor watches. 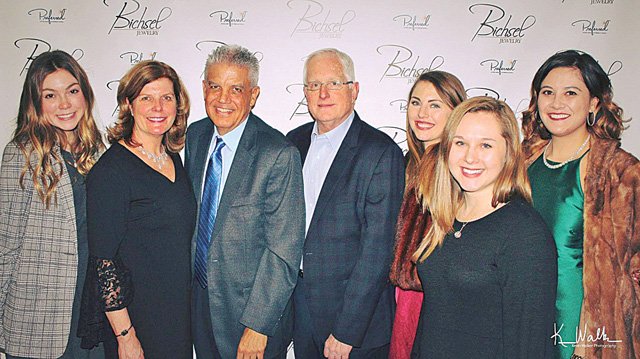 Not a fan of big cities, George started his life and career in St. Louis. As the family history is told by Mark, “George and his wife visited many towns on the railroad line. When the train reached the terminus station at Sedalia, the couple liked the town and decided to stay.”

The end of the line was just the beginning for George and his wife. In the late 1800s, watchmakers worked out of drug stores, according to Mark. “In the store George worked in there were two windows dedicated to watch repairs and watchmaking,” says Mark.

George wasn’t just a man with skills. He was an exceptional watchmaker. During his lifelong career, he garnered two patents for creating the first hand-made watch west of the Mississippi River and the five-dial complication. Both achievements are still recognized today by the National Association of Watchmakers and Clock Collectors. 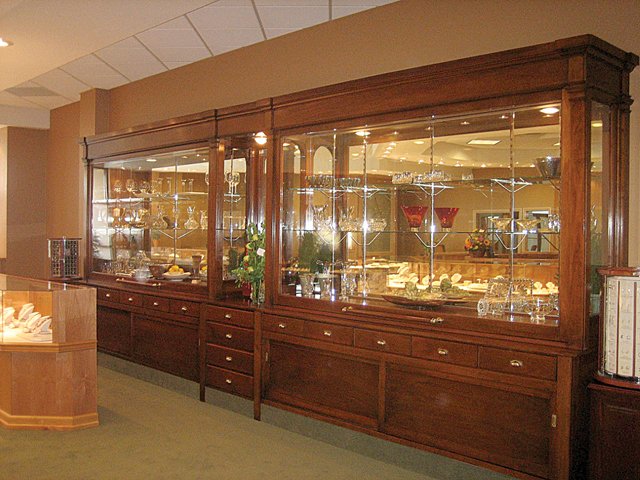 Old wall cases in the current store location pay homage to the past.

A watchmaker of such caliber more than likely saw himself doing more with his skills than working for the railroad out of a drug store take-in window. The end of the Civil War in April 1865 brought calm to the region. At the same time Sedalia began to grow. George thought it would be an opportune time to open his own watchmaking and jewelry store.

He asked his brother Emil to join him and opened a small shop in 1865. Over the next 10 years, Sedalia’s population doubled. Ohio Avenue became the town’s main strip where commerce was bustling and bountiful. “On Ohio Avenue, framed shops were being replaced with brick buildings,” says Mark. “In 1875, George and Emil opened their new store on this street.”

A sign of progress and permanence, this would be Bichsel Jewelry’s home for the next 115 years. The “it’s all about location” mantra had an added bonus for George and his brother. Their neighbor on the street was none other than C. W. Flower Dry Goods, a large, well-known store with a wide range of products.

Bringing additional foot traffic to the jewelry store next door was just the start of that relationship. In 1969, George’s great niece sold the business to the dry goods company. “She wanted their family business to be under the control of another family business,” says Mark. “So C. W. Flower Dry Goods literally knocked a hole in the wall to the jewelry store and that’s how things started under new management.”

Mark’s father held a management position with the dry goods company. With some sway in decision making, he recommended his son as manager of the jewelry store in 1978. One decade later, C. W. Flower Dry Goods closed their store and sold the jewelry store to Mark. 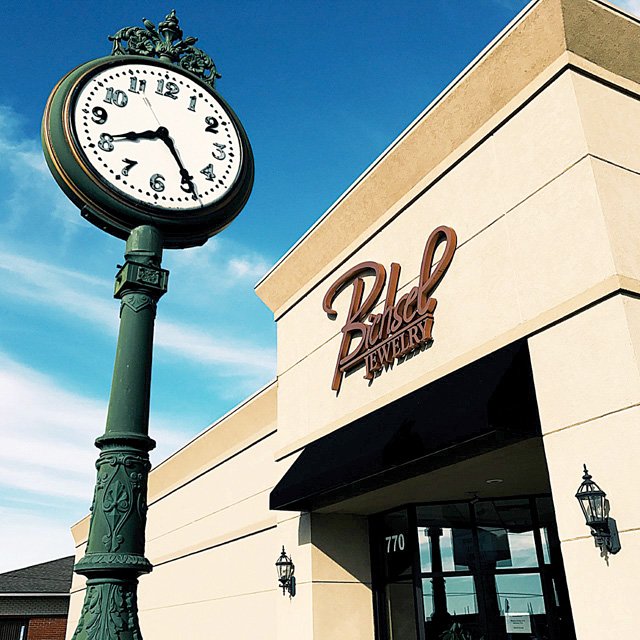 When seeking financing for the venture, the banks requested Mark move the jewelry store to the west side of Sedalia, where a developing business district was sowing the seeds of modern retail – strip malls. “In 1990, we kept the Bichsel Jewelry name, given its history in town and brand equity,” says Mark. “The new store was a gain of 1,000 square feet and the wider footprint allowed for more space for display cases.”

Mark did away with flatware and tabletop sales and increased his name brand giftware items such as Waterford crystal. He also invested more in bridal and fashion jewelry while expanding repair services at the then new West Broadway location.

Business growth for Mark and his staff continued steadily. In 2006, Mark saw the need to make a move. “We quickly outgrew our old store,” says Mark. “We needed more space to continue growing the business, so we moved to a 4,000-square-foot store on Winchester Drive.”

Honoring the lengthy history of his store, Mark brought over some of the original showcases. A move in the early portion of the new millennium, however, necessitated a fresh look with new custom-made cases.

Nine years later, Mark and his staff celebrated a monumental anniversary – 150 years in business. “This was a big number,” says Mark. “We had to do something really special so we hosted a black-tie event. We pulled out all the stops for this one.”

In looking back at the successes along the 15 decades of his store’s history, the Bichsel family’s commitment to the business and the level of craftsmanship the original owners offered customers tops the list. When the family sold the business to C. W. Flower Dry Goods, that company’s approach to purchasing and inventory control was another saving grace that kept the store going in a bumpy transition period.

For Mark, joining Continental Buying Group (CBG) was a major victory for him in many ways. “It’s an invitation-only buying group,” says Mark. “It said to me that I’ve arrived at a certain level of success to be able to join this group. It makes purchasing and inventory management that much simpler in a buying group.” 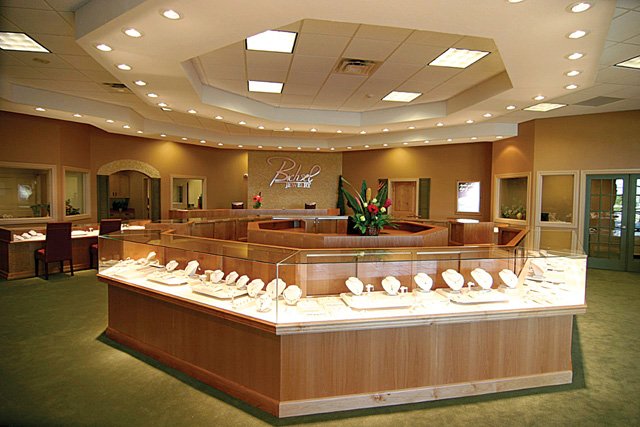 Mark said perhaps the biggest plus of CBG membership is having the backing of the Preferred Jewelers Warranty. Like most jewelers working in a multi-generational, family-owned business, Mark discovered that even his 150-plus years in business didn’t mean much to young consumers.

“Our history doesn’t mean much when we make the first sale – usually bridal,” says Mark. “It’s after that – the follow-up. Today’s young customers want ‘no risk’ in their purchases with a lifetime warranty. This has been a big, big closing tool for us.”

Other new tricks include a heavy reliance on digital media to reach his customers, using iPads throughout the store (except for transactions), and using Podium to communicate with younger customers via a text messaging system. But some old school techniques never change. “We have a full-service shop, but only use a torch,” says Mark. “Always have. Always will.”