Longtime southeastern rep coming in from the road

Goodbyes are never easy, especially when it’s someone who’s been around as long as Doug Turner. Having more than 30 years of sales and retail experience in the fine jewelry industry makes ‘Dougie,’ as his Ashi friends refer to him, an almost permanent fixture in the industry – one we count on seeing at each tradeshow. 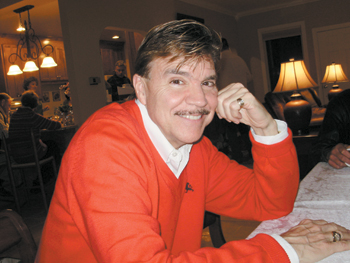 After 30+ years on the road, Ashi Diamonds’ representative Doug Turner is saying goodbye to life as a manufacturer’s rep and will now put all his focus on running his retail store, Douglas Diamond Jewelers, in Shallotte, NC.

But the charming, charismatic sales representative of Ashi is graciously making his exit from the manufacturing sales side of the business to tend to his other love – his retail store in Shallotte, near . Who can blame him?

“I’ve owned a retail store for more than 20 years, but have basically been an absentee owner,” states Doug. “Now I’m reversing that by making the store my first priority.”

Doug’s jewelry career started in the late seventies as a jewelry salesman when security issues weren’t as prevalent. He joined Ashi in the late ‘80s as one of the first sales representatives the company hired.

“When I started with Ashi they were a relatively new company in finished jewelry manufacturing and many retailers didn’t extend a lot of trust toward them. I had to overcome all of the preconceived ideas and prove to the retailers that Ashi was a quality group and well worth trying.”

But Doug had a way with good ole southern boys and soon, his customers in the ’s, North and as well as , agreed to give Ashi and Doug a chance.

“Doug’s knowledge of the jewelry industry was a tremendous asset to Ashi in the early days of our business,” recalls Raj Pandya, co-owner of the company. “Not only did he represent us well, but he jumped right in and helped coordinate our sales meetings, conferences and weighed in on our marketing programs.”

Indeed, Doug wore many hats in the company. From southeast sales representative to product development, there is no doubt his involvement helped Ashi gain the national and international recognition it has today.

“I’ve enjoyed helping Ashi develop cutting edge styling produced with the highest level of quality and great marketing programs,” says Doug. “It was a feeling of team spirit with everyone involved in Ashi that certainly helped propel the company to the level of success it has today.”

Hard work played a big part in Doug’s success, but there is no denying the very special relationship he has with his customers. Categorizing them as friends, not customers, Doug recalls how he’s worked one-on-one with each one to help improve their sales, products base and even the aesthetics of their stores in order to ensure success for those retailers.

“I’d do nearly anything they needed me to do to help them be more successful,” states Doug about his retail customers. “You could say I was more of a personal consultant than just a salesman.”

But if the thought of a ‘Dougless’ Vegas Show or a ‘shortage of Doug’ at the Atlanta Show has you down, don’t despair. Doug will still be at the shows but in a new role; independent retail owner.

“My store is located in Shallotte, near , , which sits between , and . My clientele is eclectic with a mixture of tourists, locals and even those people who travel from miles away. It’s time to focus on my bridal inventory and continue to build it up in order to develop such an amazing bridal department that it rivals major retailers, but with the flexibility of an independent.”

If anyone can do it, Doug can. Knowing both sides of the industry so well pays off when making key decisions for his business.

“I know the styles, trends, qualities, and pricing. Also the do’s and don’ts, and ins and outs of both sides of the business.  The same time and energy I gave to Ashi and my clients I’ll give to my retail customers. I want to educate them on not having to spend a fortune to get what they want. To truly offer trust and value.”

Although Doug knows he’ll miss his clients, his Ashi family and his fellow reps, he does have advice for those up-and-coming sales representatives.

“Treat every client like they are family. Find out what your client needs and fulfill those needs. Oh! And be careful and safe out there.”