Award winning jewelry designer Lisa Perantoni had no idea that searching for answers to her rhodium plating problem would lead to marriage. Neither did anyone else.  Southern Jewelry News and Mid-America Jewelry News are proud to be a part of this amazingly, romantic story which, believe it or not, actually started with our “I’m a fan of Southern Jewelry News” Facebook page. We’ve always known our fans are amazing, but this story proves it. 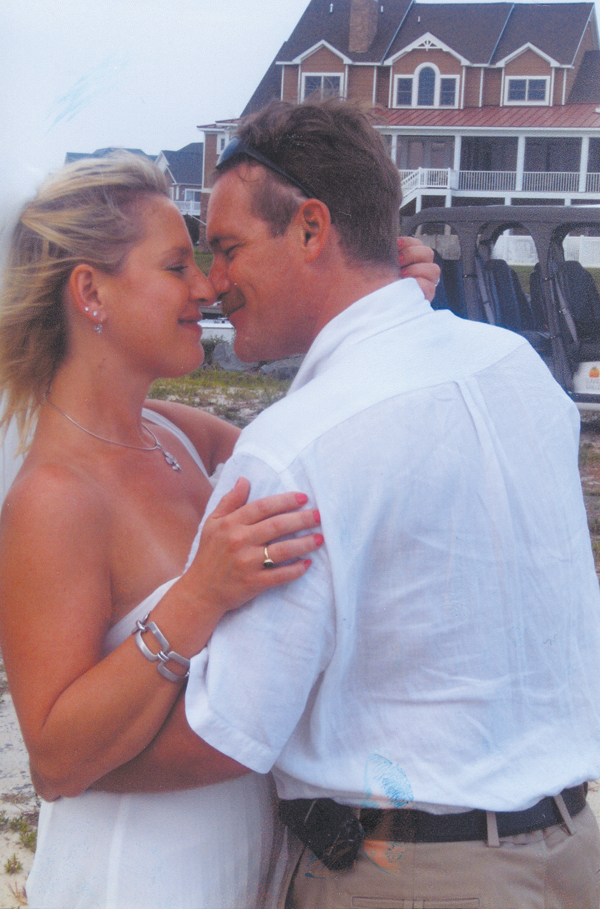 Lisa Perantoni and Wade Hendrickson, both 41, were long-time readers and fans of Southern Jewelry News and Mid-America Jewelry News when they joined the SJN Facebook page earlier this year. In April, when Lisa needed some advice, she turned to SJN’s fans for solutions to a rhodium spotting problem in the chat room and, in typical SJN fashion, they came to her rescue.

Wade Hendrikson quickly responded to her questions. His prompt response and cute picture spurred the conversation beyond that of rhodium plating as their online chatting continued throughout the day.

“Not only did he answer my questions, but there was a picture of him and I became curious,” recalls Lisa.

Wade was in , working for a local retailer and Lisa was in running her own shop, Professional Jewelry Services. That left them hundred’s of miles apart. The idea of a “Let’s meet for coffee” date was definitely out of the question.

As their interest in each other grew, so did the amount of hours they spent talking with each other. Before they realized it Lisa and Wade were online chatting for as many as eight hours a day.

“I felt an automatic attraction to her,” Wade explains. “I felt like we were kindred spirits. We would both sit at the bench and talk for hours and she knew what I was talking about. We spoke the same language.”

For the next 30 days Lisa and Wade shared everything about themselves through Instant Messaging and long phone conversations. There were many late nights that led to early morning phone calls and, as the days passed the two starting thinking about their first face-to-face meeting.

“Wade had a weeks’ vacation coming up and I invited him to for a visit. Our conversation had already started to get serious at that point and we knew it was time to meet in person. I was just thinking we’d see how the first few days went.”

Wade faced his own doubts about their first face-to-face: “I was really nervous about meeting her. I was thinking worst case scenario and was worried she wouldn’t like me.”

By the time Wade’s flight had landed both he and Lisa had confided in the people around them what was going on. The woman sitting next to Wade on the plane couldn’t believe his story. She was so amazed that she followed him to meet Lisa.

Likewise, the bartender at the airport restaurant where Lisa waited became involved in helping her find Wade’s gate. When he realized she was headed to the wrong one he started yelling the correct gate number across the airport.

By now both Wade and Lisa had an entourage in tow, and when the pair found each other in the crowded airport, people around them were delighted.

“It was very emotional,” recalls Wade. “It was kinda ‘high school’ romance stuff, but we still look at each other that way.”

It wasn’t until the third or fourth day into the visit that Lisa introduced her six year old daughter to Wade. Wanting to protect her, Lisa needed to confirm that the tender, compassionate man she’d known over the phone was the same in person.

Six year old Angelina and Wade hit it off right away. It was now official; Wade and Lisa were moving forward.

On July 31st Wade and Lisa were married. Angelina participated and actually brought everyone to tears when she told Wade, “I’m so happy you’re going to be my daddy.”

Wade is now in working alongside his new bride in her store. The two bubble with excitement as they tell their story knowing that “things like this don’t happen every day.”

You just never know who you’ll meet on the SJN Fan Page. If you’d like to send a message to the happy couple become a fan of Southern Jewelry News on Facebook.