Marketing outside the box

Independent retailers have come a long way when it comes to marketing their businesses. Years ago, very few had a marketing budget or a marketing plan. But today most retailers realize the critical nature of keeping their company name out there.

Still, many independent retailers view marketing in a traditional way; flyers, posters, direct mail pieces. In today’s market those tools are cumbersome, costly and typically generate less than a five percent response. In a day when retailers have to work harder for a sale that is typically worth less than it was a year ago, smart marketing can take the financial burden off the back of the owner.

The National Retail Federation dubbed the end of 2009 as the “holiday season of the bargain hunter,” which means 2010 consumers are still looking for a deal. That makes marketing, sales and promotion one of the most important business components of the New Year.

So look no further for inspiration. We’ve tapped industry professionals who are willing to share their interesting, innovative ways to garner attention for their businesses and, consequently, increase their sales. Whether it was a diamond dig, a bejeweled car raffle or singing Santa’s in the street; these businesses found a way to leave a big impact on their current and potential future customers.

The Big Dig and Bejeweled Cupcake 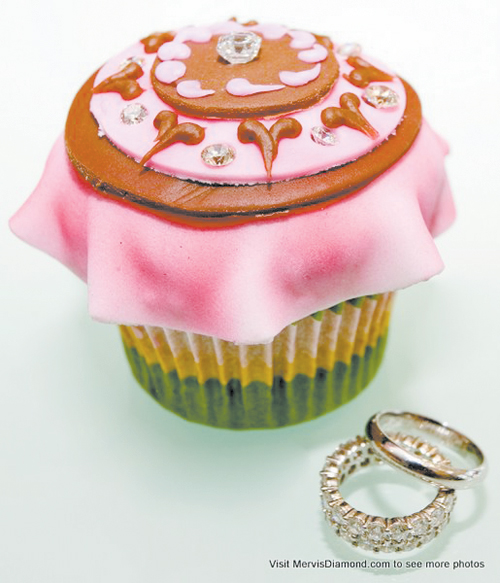 Mervis Diamond Importers in wanted to promote the launch of their new mervisdiamond.com website in August of 2009. Already a big radio advertiser, the company decided to play off the widely popular radio spots featuring Ronnie Mervis’ diamond mine stories. The promotion, called The Big Dig, centered on 60 lucky people getting down and dirty trying to find 60 buried diamonds in a large sand area. Participants were randomly chosen and on Friday, August 28th the lucky participants rolled up their sleeves, kicked off their shoes and started digging in the sand. The diamonds varied in size and shape encompassing 55 smaller stones and five larger diamonds worth more than $15,000. With the help of the local radio stations, The Big Dig was a huge success. You can catch posted video of the dig on Mervis Diamond Importers’ Facebook page.

Called the Fantasy Diamond Cupcake, Mervis decided to sweeten the 2009 spring bridal season with a diamond studded cupcake. In order to promote their diamond engagement and wedding band collections they created a decadent, edible, diamond-studded cupcake and put it on display for everyone to come by and see. And, customers received a free cupcake for stopping by. Total cost for the promotion came in under a hundred dollars and customers loved it. The Bejeweled Cupcake created more hype than Tiger Woods… well, almost. The promotion successfully drove traffic into the store and generated new customers. Adorning the top of the cupcake was a 2-carat Asscher cut diamond surrounded by eight round brilliant diamonds. This just may come in as the most expensive cupcake ever created with a price tag of $30,000. Talk about indigestion!

Laura Loyd Jewelers in Algonquin, IL cooked up something special with her business neighbor. When she realized she shared a common customer base with an upscale steak house located in the same shopping complex she approached them about creating a Laura Loyd martini. The luscious drink is concocted from only high end liqueurs that combine to give the drink a beautiful red hue. But this is one martini that keeps on giving. Every Laura Loyd Martini is served with a red Kelly Waters pendant leaving the customers with something way better than a hangover. Diners need only shell out $60 for the drink and pendant. The Laura Loyd brand is cross-promoted by having the drink listed on the menu and the steak house gains exclusive rights to the city’s most expensive martini.

Did I Really Just See That?

Rex Solomon of Houston Jewelry in knows how to attract big attention in a small town. Every Christmas season Rex hires 10 of his favorite people, dresses them up in Santa suits and puts them outside his store in the middle of one of the busiest streets in his area for two weeks prior to Christmas. The now famous Santas, called the Houston Jewelry Santa Team, are there to wave, pat their bellies, and maybe even do a little dancing while rush hour traffic passes by. The absolutely hysterical group of 9 men and 1 woman has even been known to try and spell out HO, HO, HO like a bad rendition of YMCA.  Rex Solomon knew the Santa Team needed year-round exposure so he videotaped the jolly misfits and uploaded the video to the Houston Jewelry Facebook page as well as to YouTube. Take a look for yourself. Its grassroots marketing that has become a community tradition.   www.youtube.com/watch?v=f6nh63aSris

Buddy’s Jewelry in has been a mainstay in the community for more than 45 years. Owner Thomas Turner, or Mr. Tommy as he is affectionately known, is renowned for his giving spirit, but even his employees were surprised when he pitched the idea of giving away a car. Wanting to generate money for the local schools and charities, Mr. Tommy proposed selling $5 dollar raffle tickets and donating the proceeds to the seller’s choice of schools. For more than a year Buddy’s employees sold tickets for a car covered with his store logo and diamond magnets that drove around town promoting the event. Word gets around in a small town and everyone in knew about the car raffle. The buzz it generated helped increase store traffic and ticket sales raised a lot of money for a great cause. You can’t go wrong there.

Devon Fine Jewelry in recently celebrated their 30th anniversary in business. To show appreciation to the community for their support Nancy Schurring, owner of the company, organized an authentic treasure hunt. Called Finders Keepers, the promotion began November 16th 2009 when 30 white gift bags with the Devon logo were placed in 20 northern towns, each with a single piece of fine jewelry in them. Some were outside, some inside; some were in bleachers while others were at a supermarket. Whoever found the bags got to keep the jewelry inside. And the jewelry inside the bags included several pieces with large retail prices. In total Devon gave away $25,000 worth of jewelry, received film coverage from four local news stations and a local radio station and got to listen to 30 lucky people tell their story of finding treasure in the little white bag. Visit www.devonfinejewelry.com to view the news footage and find out more about this widely popular promotion.