John Wade of North Carolina is a master artisan and hand engraver, one of the best. Much of his journey to the comfortable life he lives now is typical in the jewelry trade – he started off in a small shop, moved to a retail location, and ended up back in the custom design studio he loves. But before any of that, he ventured out west as a teenager to dig for opals in Nevada.

“We would travel out during the summers and dig in the mines,” John remembers. “My Uncle Charlie was a hobbyist rock hound, pretty much full-time in his retirement. I don’t know that he ever made a dime at it, but we would dig and find opals – sometimes something we could cut! So I started out as a hobbyist lapidary, from the age of about 12 to 16 years old.”

John grew up in Newton, Iowa, known as the “Washing Machine Capital of the World,” where his whole family worked for the Maytag company. But his Uncle Charlie, who actually made money as a machinist for Lockheed in California,  may be the one who sparked something inside him, a passion that led to an esteemed career in jewelry. “John has become nationally known for being the master hand engraver,” says his wife Rita, who works with him as Wade Designs Jewelry’s CEO/Business Development and Marketing Director.

John graduated from Gem City College in Quincy, Ill., in 1977 and worked in several different Iowa jewelry stores. After his first wife passed away of cancer, John had the good fortune two years later to meet Rita, working in Mount Pleasant, Iowa. John had two boys, and Rita had two girls. “We melded our families,” John says. “We all moved into my house, but soon after I got ahold of a headhunter, and a store in North Carolina was hiring. I didn’t like working in the store – but I liked North Carolina, and we stayed. We moved 23 years ago and we’re still in the same spot.

“North Carolina people knew what hand engraving was,” John adds. “I’d had a hard time selling to farmers in Iowa, but in North Carolina, I found customers easily.”

John worked in the Rocky Mount store where he was hired until 1998, then moved his custom business to a studio beside his home doing wholesale until 2005, when he opened a brick-and-mortar retail store. Ten years later, he closed the store and moved back to the studio, where he’s been since.

“The building was here when we bought the house,” John says. “It was a garage converted into mother-in-law quarters. I bought the house almost just for this building. I thought, ‘This is perfect.’”

“When we closed the store in January 2015, it was for several reasons,” Rita adds. “The road was closed in front of our store for a year. Also, my two daughters were working in the store, and we all had different talents,” giving John the opportunity to work in the studio where he enjoys meeting customers one-on-one to get a feel for the piece they want designed. John uses either the customer’s own gemstones and metals or creates a totally new piece drawing from his hand-selected diamond and gemstone inventory.

“We were pioneers in the studio business model, and for the last four years, we’ve been doing business by appointment,” Rita says. “John and I had been involved in Jewelers Helping Jewelers, and we have 10,000 people in the Edge database and 3,000 people in the e-mail database. We have some regular marketing, but now it’s 95 percent digital marketing. That’s been the biggest change for us. It’s a newer business model. 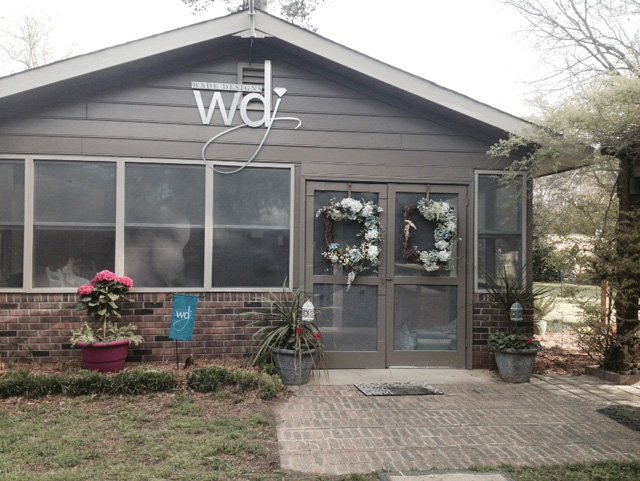 “We are fortunate to have the 1,700-square-foot building right beside our house with separate driveways,” she adds. “The studio has a jewelry case, a casting room and an alarm system. We’re now doing business with 500 stores across the United States, in all 50 states. We are more profitable than ever before.”

Rita plays a powerful role in the business. She graduated from Iowa Wesleyan College in Mt. Pleasant with a degree in Business and Accounting with a concentration in Marketing and Computer Science. She creates customer satisfaction programs, promotional packages and website design, and manages Wade Designs Jewelry events. In the city of Rocky Mount, an hour northeast of Raleigh, she’s known as the “Queen of Marketing” and was selected by the Chamber of Commerce as Small Business Woman of the Year for 2006.

The younger generation worked in the family business as well when they were young, but they’ve moved on. “All of our children were forced to work a little in the store!” John laughs. “My son the aerospace engineering guy swept gold from the floor.” But neither son – architect Nick or nuclear power plant operator Alex – was interested in bench work.

Rita’s daughters, Chalea and Michaela, worked in marketing, and Michaela managed the gift end of the business. “She now reps for a line we carried in our store,” Rita says. “She’s making double the money she could make in the jewelry store. But I’ll still call and ask her to do things for me!” 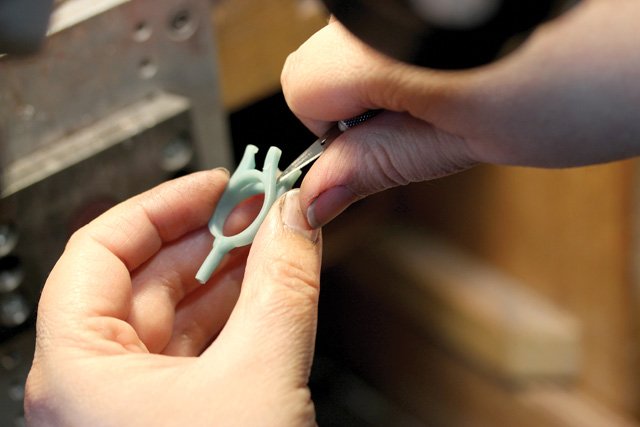 John, who also specializes in hand carving waxes, fabricating custom jewelry, casting, setting stones and repairs, can engrave just about anything – from trophies to car parts to guns. “We do huge golf tournament trophies,” Rita notes, adding that John would jump at the chance to engrave the National Hockey League’s Stanley Cup trophy.

“We have the luxury of being able to say we live a very easy life,” Rita says, and John adds: “It’s a lot less stressful than working in retail. Retail is hard – way harder than engraving.”

He clearly enjoys his work, sharing the process with mesmerizing videos he posts on Facebook, guiding the viewer through the artistic process, focusing on fine details, with an amazing gift for instructive and interesting narrative.

“I just have to say kudos to John,” Rita says. “Our industry connections have grown our business without much effort at all. John does great engraving for one customer, and three other people hear about it. Sales reps hand out his business cards all the time. That’s really special.”

John modestly cringes at the word “master.” “Nobody ever really is a master,” he says. “What I’d say is I’ve done hand engraving 40 years, and I do it pretty well.” 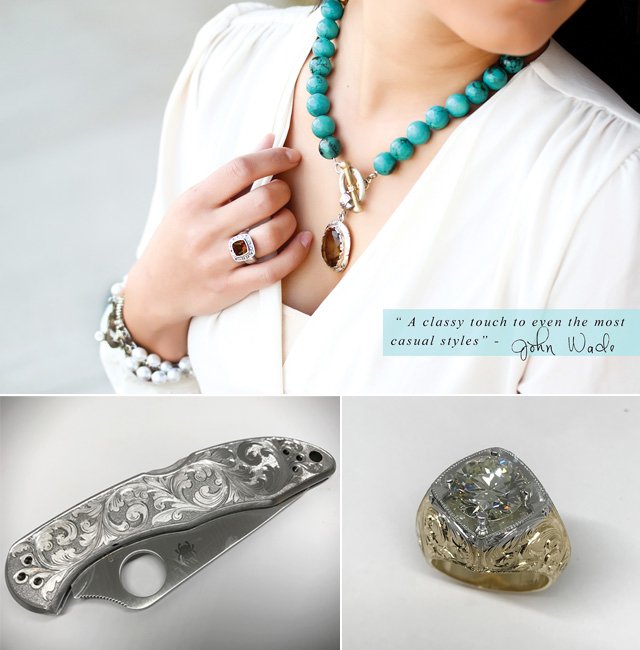 For more information about Wade Designs Jewelry, you can call 252-451-9270, visit wadedesignsjewelry.com or e-mail john.wadedesigns@gmail.com.