Alan Perry was across the country when he saw the first signs of the virus that would mark the coming year. It was early March 2020, and the Wilmington, N.C., jeweler had spent three days in the Napa Valley with his Plexus group. When he arrived at the airport to fly home, he learned there was a cruise ship off the California coast that wasn’t allowed to disembark, and “everybody at the airport had masks on.”

Back home, he immediately closed his store, Perry’s Emporium, and canceled his upcoming TV and radio advertising. The closure would last 37 days – and the store bounced back with astonishing vigor.

“We had a great week before Mother’s Day,” Perry recalls. “And we had a June promotion for our 29th anniversary, 29 percent off everything in the store, and it was the best June we’ve ever had. We were up 18 percent over the year before.”

After a down July, Perry’s Emporium rode out an August hurricane and power outage – the second in 12 months – and saw a 48 percent increase in business. September performed like a normal November or December – and then those two months broke the store’s historical records.

With a spacious Barclay Commons storefront – 7,500 square feet total, including 5,600 square feet of showroom – the store was well-poised for a socially distant holiday season.

“We could have 60 people in the building,” Perry says. “On Black Friday there were 90 people lined up out the door. We let 40 people in at a time. … You can’t walk 12 feet without finding a station to spritz your hands.”

Pandemic protocols also led to security concerns. When a mask-wearing man in an unseasonably heavy coat walked in demanding to see “all your big diamonds,” Perry says, “We realized that we now had a problem with masks keeping us from facial recognition on our camera views.”

Perry thinks restricted and then reluctant travelers stayed home and turned to jewelry, to his benefit.

And then there was his own tireless outreach.

Although he “did not spend a dime on advertising” for nearly two months in the spring, Perry was not silenced. His TV and radio accounts granted him free air during the closure. Other approaches continued without a blip, or made their debut.

“I’m a consistent advertiser. I believe in TOMA, top of mind awareness,” he says. “I’m always doing something on Instagram, Facebook, emails, direct mail, the website.

“We have a brand-new website that started in November. We’d been working on it for seven months, and the first day we launched we did $6,000 business just on the web,” Perry says.

His healthy attitude toward advertising corresponds with some advice he got after one of his best years, 2010-11.

“My accountant said you can spend your money on the business or give it to the government. So I spent $1 million on advertising.”

He also invests in a steady schedule of monthly promotions and events.

In February, Perry gives away Valentine’s Day packages including a card and a box of chocolates. Larger purchases earn customers a bouquet of roses, and the largest puts the roses in a vase.

March, which honors Perry’s and his wife Sonya’s birthdays and their wedding anniversary, translates into age-based discounts – 63 percent for his birthday in 2021 and 29 percent for Sonya, who is “29 and holding” – as well as 10 percent off wedding gifts.

In April, Perry anticipates selling about $500,000 in loose diamonds.

In June, pearls rule, and the store will celebrate its 30th anniversary with a 30 percent discount.

Other major promotions involve a hefty gamble on major insurance-backed giveaways: For 10 years, Perry has run the “Let It Snow” promotion, where customers can get their pre-Christmas purchases free if it snows 5 inches on Christmas day in a chosen city. The first year, when Asheville, N.C. (it rarely snows in Wilmington) saw a fluke snowfall, the store refunded $489,000. The promotion has moved around seeking snowier locales, including Snowflake, Minnesota, North Pole, New York, and Bethlehem, Pennsylvania.

Under the year-round “Rainy Day Diamond Guarantee”, couples can get their diamond ring free, up to a $5,000 value, if it rains on their wedding day. One year, 12 couples won.

And every summer, the “Weather or Not” promotion promises July purchases free if the store sees 1-2 inches of rain or 99 degrees on Aug. 1. 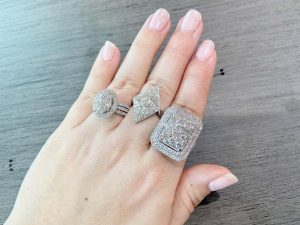 Perry has offered couples a chance to work with a jeweler to make their own wedding bands, but the idea hasn’t been as popular as he’d hoped.

“I’m always trying some crazy new promotion,” he admits. “If you don’t put your sails up, your boat won’t go anywhere.”

Perry is gradually decreasing his time at the store to prepare sons Joshua and Jordan to eventually take over. His own father was a plumber who learned the trade during wartime, building Liberty Ships in Wilmington, Delaware. At 14, Perry worked in the back of a jewelry store for his brother Ernie, and one day he made an important discovery:

At age 17, Perry went to GIA in New York City and earned his GG degree. He operated a store in Charlotte with Ernie and his other brother, Coleman, for about 10 years before striking out on his own in Wilmington. Today Perry’s has won “best jeweler” honors for more than a decade, and he gives to dozens of charities, including causes such as the Cape Fear Literacy Council and the American Heart Association.

“I love it, I wouldn’t change a thing. … If you put God first, everything else comes to you. I just keep reinvesting in the business. I’m very thankful.”

Star Gems’ Next Gen – expanding pathways to success for retailers

Retailer Roundtable: How have you handled an inebriated customer in your store?