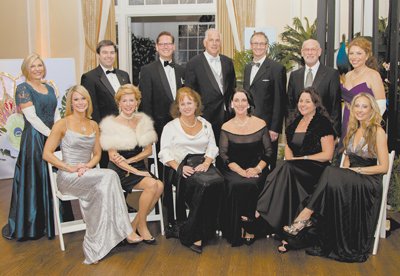 The “Jewels” raffles was first conceived by Cheryl Fornash of Cheryl Fornash Jewelers as a way to support cancer research at Massey Cancer Center at the “Women in Wellness” event in 2009.

“At the time, I was volunteering on the committee for the Women in Wellness events. One of the most popular features at the event for a few years prior had been a jewelry raffle,” said Fornash. “I thought if we could expand it to include pieces from other jewelers, it would make a bigger impact and raise more for Massey. That year, 11 of my colleagues agreed and joined me to support the cause – each donating a piece of jewelry with a retail value of $1,500 to the raffle that became known as ‘Jewels for a Cure.’”

“After five years, I’m thrilled to be able to say that the ‘Jewels’ raffles have become a tradition among Richmond’s most respected jewelers,” continued Fornash. “We all individually support a myriad of charities throughout the year. But on this one night we put aside our roles as competitors and come together to socialize and raise funds to help provide the best medical care possible for the children of Richmond.”