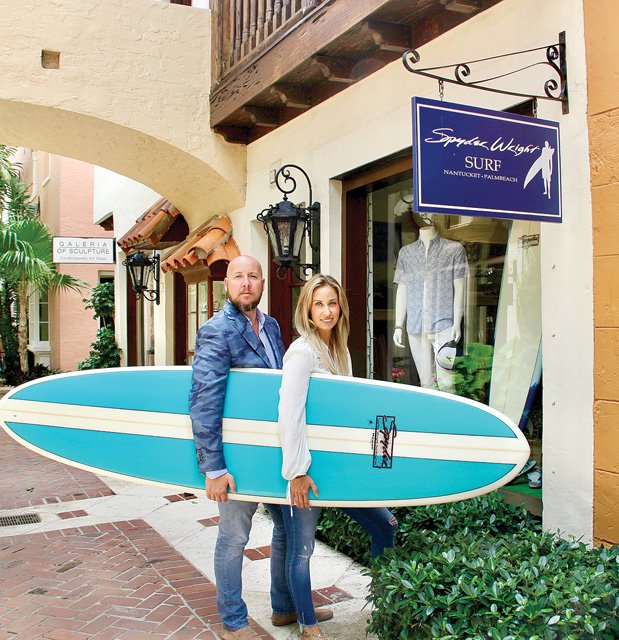 Husband and wife team Edward and Sherie Townsend holding a custom Spyder Wright surfboard.Edward Townsend Wright III gets casual texts and calls from rock stars, movie stars and billionaire CEOs who have a desire for exquisite timepieces – or the latest in cool surf gear. It’s a unique combo, and Edward has fun with it, splitting his time between his Trinity Collection and Spyder Wright Surf stores in Palm Beach, Fla., and Nantucket, Mass. He considers Palm Beach home, with his shop nestled in the sun-drenched, bougainvillea-draped Via Mizner along Worth Avenue.

“I call it a gentleman’s surf shop,” Edward says. “Guys love it; they can buy an expensive watch and high-end surf clothes, have a drink at the little bar. It’s cool.

“I deal with a lot of prominent people, A-listers. We have a wall of celebs I’ve done business with in the store. My clients know I’ve been dealing with watches for years, and they come to me because of my discretion.” Edward is not dropping names; loyalty and good business are paramount.

“I deal with prominent heads of industry, CEOs, inventors, very successful people. Nantucket, especially, is just insane. A great deal of clients have their main home in Boston, New York City, Chicago, Atlanta and Los Angeles with second or third homes in Palm Beach and Nantucket. It’s a billionaire boys club. One CEO billionaire after another comes into the shop – it’s insane how many actual billionaires I deal with. 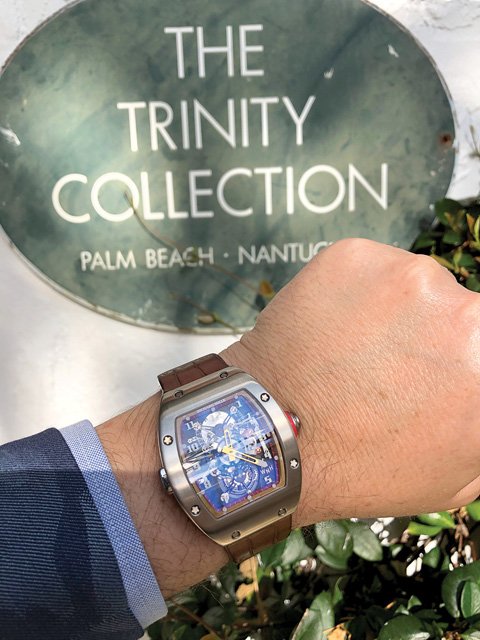 Along with his own E. Townsend Watch Collection designs, Edward’s Trinity Collection offers very rare and vintage watches from the 1920s to 1960s, including Rolex, Omega, Cartier and Patek Philippe. Prices run from $3,000 to $700,000. While 80 percent of his business is watches, The Trinity Collection also includes fine estate and contemporary jewelry from Tiffany & Co., Van Cleef & Arpels, Chopard and Buccellati.

The store looks “antique-y,” Edward says, not what elite brands would expect if he were an authorized dealer. “I’m not like most stores; I have unique relationships, and that’s why they like me. Certain brands want this or that, and I tell them if you want to be here, this is what I am. I don’t have to answer to them; I don’t like corporate.

“My clients could go anywhere, but they come here because I have a great collection – I specialize in the hard-to-get pieces; I have Daytonas, Submariners and Explorers in stock. It’s the relationships that set me apart. Referrals are so huge. You can’t pay for that.”

Strong family connections shimmer just beneath the surface at The Trinity Collection. “I met my wonderful, supportive wife, Sherie, while working for a jewelry store and she helps run my clothing line,” Edward says. “She has a real eye for design. 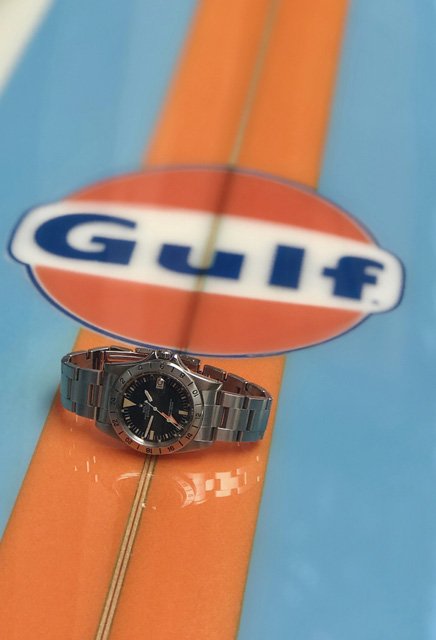 Mint condition 1972 Rolex Explorer “Steve McQueen”, made popular by the actor, atop a custom surfboard.“A tradition among the ‘Edward Wrights’ is to give their sons a Rolex Submariner upon high school graduation,” Edward adds. “I bought one for my son when he was born, and it’s now worth three times what I paid for it. My grandfather bought his son one, and my dad bought me one.”

Edward IV, he says proudly, cobbled together his own money for his first watch purchase. “My son saved up about $2,000 and on a father-son trip to New York, at age 13, bought his own first Rolex with a tropical dial.”

And then there’s Edward’s father, “the guy behind the brand.” Edward Townsend Wright II, a former professional surfer who goes by the name Spyder, is a true Renaissance man who’s excelled in everything from surfing to fine-clothing retail to real estate. Edward bought Spyder’s watch business 16 years ago, incorporating his own style and utilizing Nantucket real estate he’d previously invested in – another inspiration from his father.

“I’ve bought key properties and done well,” Edward says. “My advice to anyone is buy as much property as you can and hold on to it. I turned this shop into what it is today – which is fun! – because of real estate. I took my father’s pro-surfer name and created a brand, using his logo, and started Spyder Wright Surf to fill the space at my store in Nantucket. Now it’s more than that, with two stores . . . it’s like ‘watches and waves.’ ”

Spyder, along with his surfing prowess, worked as a mechanical engineer and instilled a curiosity in his young son that involved taking apart a World War II military watch, categorizing every piece, and then putting it back together in working order. Edward spent four months on the project during his childhood in St. Michaels, Md., learning the design and workings of mechanical timepieces. 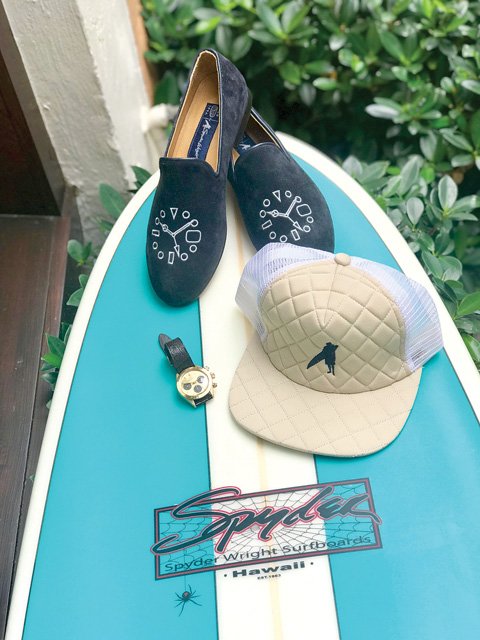 Rare 1968 Rolex Daytona in gold with “tropical” brown sub dials.Edward studied International Business at the University of Maryland and went on to intern at Smith Barney. “In college, I worked during the summer in Ocean City, Md., in a jewelry store,” Edward says. “I had a knack for being in the jewelry business. I would party all night and go to work at the store in the morning; I don’t know how I did that, but I’d sell a lot! I did well with sales but hated the corporate structure.”

Even though he wasn’t planning on a career in jewelry and watches, he did just that, leaving the corporate financial world behind when he purchased his father’s business. “I paid him too much,” Edward laughs. “My dad is old school. I had to buy the business.”

Spyder named his business The Trinity Collection because he owned a church called Trinity in Maryland that abolitionist leader Frederick Douglass attended, Edward adds. “He also owned a house across the street that Frederick Douglass grew up in. The church was across the street, and my dad was restoring it, stripping it down to nothing. The church was in such bad disrepair that he couldn’t fix it, but he rebuilt it exactly the way it was. He since has sold it to the Maritime Museum. That’s kind of neat considering the fact that I got into serious vintage watches.”