As jewelry store owners ready themselves for the JCK Las Vegas Show and other buying events to prepare for fourth quarter retail sales, a number of key colored stone trends, treatments and gem lab nomenclature may influence open-to-buy budgets for Christmas 2015, leading with precious color.

Selling gemstones on memo used to be almost exclusive to diamonds. Given the high prices of corundum, top-end rubies have become a “memo only” business for retailers with fine blue sapphires not far behind. This is one of the many colored gemstone trends outlined in a presentation by GemWorld International during the Tucson Show.

In the presentation given at the AGTA Tucson Gem Show, Stuart Robertson, research director for GemWorld International, and Richard Drucker, president of the company, updated attendees on a range of colored stone trends that are affecting the market. Chief among them are historically high prices for ruby and sapphire that has retailers and their customers looking at red and blue color alternatives.

Equally important information covered in their presentation included how some gem labs have changed the nomenclature presented on ruby grading reports making them more consumer friendly with marketing references to the precious colored stones. And, with regards to colored stone treatments, dyed oils are the treatment of the moment. Detection tips on these treatments were also part of GemWorld International’s Tucson presentation.

Trends tend to transcend the calendar year, with prices for top-end ruby and sapphire carrying over from 2014. Top colors of ruby are “already a memo-only business with finer blue sapphires getting to that level,” according to Stuart.

Part of the pricing issue impacting fine ruby supplies to the market is traditional Southeast Asian sources such as Burma, Thailand and Vietnam have been mined aggressively in recent decades by Chinese-owned mining concerns. Aggressive mining and China’s burgeoning consumer market have contributed to a scenario where available rough and polished rubies have been getting increasingly scarce in recent years.

“The Chinese [consumer] market is really heating up,” says Stuart.

A contributing factor to the Asian ruby market is changes in the some gem lab’s nomenclature. “Traditionally, gemstone grading reports for corundum, especially ruby, contained language that was less market driven,” says Stuart. “In recent years we’ve seen references such as ‘Pigeon’s Blood’ for rubies. In Asian markets, especially Thailand and Hong Kong, gem traders have been selling rubies just by the paper [grading report], without even seeing the gemstone itself.”

Price corrections for finer rubies has already begun with the Asian consumer markets detecting disparities between the gem lab nomenclature and the actual gemstones being graded. With East Africa now the leading source for ruby rough, prices for Mozambique ruby material have spiked.

“Prices for the African material will adjust to more normal levels, but the Burma rubies on the top end are still holding their value,” says Stuart. “With very scarce ruby supplies coming out of Burma, price for their finer rubies will continue to stay at high levels.”

For now, the consumer market has found price-point-friendly alternatives to ruby’s famed red color, leading with red spinel, followed by rubellite, and even red garnet. “For the rest of this year and into early 2016, these alternatives, especially garnet and rubellite, will be cheaper alternatives until the ruby price corrections return prices to more normal levels,” says Stuart.

Higher prices for blue sapphire have taken the market in different corundum color directions with increased consumer interest in purple and yellow sapphires. Tanzanite is another beneficiary of high blue sapphire prices. A member of the zoisite family, tanzanite can have a strong face-up blue color with a slight purple secondary color.

The consumer market is also making friends with other blue colored stones, even those in much lighter colors. Blue zircon, with its vibrant blue colors, is one of the leading colored stones poised for growth this year, as is aquamarine with finer colors averaging $200 to $300 per carat.

Other colored stone market trends include shortages of tourmaline supplies – compared to the height of production several decades ago. “Greens are available, but blues and reds, not so much,” says Stuart.

Exotic and lesser-known gemstones are also finding buyers. During the Tucson Gem Show green and yellow zoisite were observed at some exhibitor booths, especially with the German cutters. “We also saw trapiche gemstones at the Tucson Show, namely sapphires. And, bi-color tourmalines are also doing well,” says Stuart.

For pearls, Chinese freshwater goods continue to be strong price-point alternatives to other pearl varieties. So much so that “sales for freshwater pearls are up about 20 percent compared to the same period last year,” says Stuart. “Smaller sizes doing well are the 9mm, 10mm and 11mm goods and graduated strands leading to a 12mm are selling well for freshwater pearls.”

Akoya pearls are still under the cloud of freshwater pearls with production down for the Japanese goods, but quality up. In the current pearl market it’s a two-horse race with freshwater and Tahitian goods leading the pack.

The opal market has taken an interesting turn with the focus back on Australian goods. Ethiopian opals have been dominating the market for many years, but with the introduction of Welo goods concerns over the material’s porosity have surfaced. When compared to better grades of other Ethiopian opal, lesser qualities of Welo goods absorbed oils and chemicals from the skin. 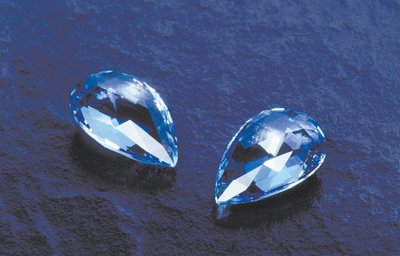 “At Tucson we saw Welo opal prices as high as $250 per carat,” says Stuart. “At those levels buyers might as well spend a little bit more and get the Australian opals. Regarding the absorbency issue, we even saw Welo opals sold in water, not a good sign. When prices for Welo material return to prices at around $18 to $30 per carat, people will be more willing to gamble on this material.”

Emerald prices have been staying at high levels with Colombia’s famed Muzo mine off-line. The mine is set to open next year. Muzo material will re-enter the market at that time, but expect high prices for these emeralds.

On the topic of emeralds, dyed oils and polymers, treatments once associated almost exclusively with emerald clarity enhancement, is now being used in broader applications for many other colored gemstone varieties.

“What’s troubling about this treatment is we’re seeing it in more colored stones such as ruby and tourmaline,” says Stuart. “And, it’s not widely disclosed within the trade. The main trouble for retailers and their staff is placing dyed oil or polymer gemstones in an ultrasonic cleaner and having the color bleed out.”

Dyed oils and polymers are commonly used with colored gemstones that have a surface-reaching break. “If there is any doubt about a certain gemstone, look at it under reflected light and follow the break,” says Stuart. “If it’s surface-reaching, there’s a good chance dyed oils or polymers were used to enhance the appearance of the gemstone.”

Stuart added: “A lot of people aren’t picking up on it and jewelers are getting blamed. Examine gemstones carefully when buying at shows and when cleaning and caring for a customer’s jewelry in your store.”