Communicating to customers with charities

The final installment in a four-part series discussing best retailer practices as the spokesperson for your business.

After dedicating most of their careers to the gem and jewelry industry, Tyna and Bert Wheat opened The Diamond Galleria in 2013. In five short years, they have a thriving and profitable fine jewelry store. Based on their decades of collective industry experience, affiliations with trade associations and buying groups, and an expansive cause marketing-based business model, they’ve become known throughout Evansville, IN (and the tri-state area) as caring business owners that support a number of area non-profits and local aid organizations. 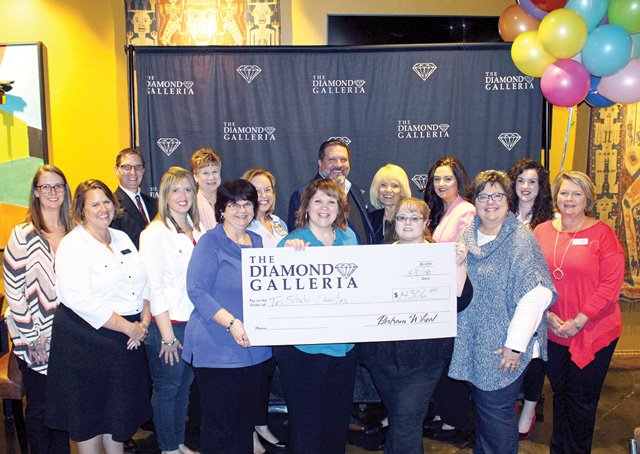 At The Diamond Galleria Bert & Tyna Wheat have built a reputation as caring business owners that support a number of area charities.

Be it at home or at their jewelry store, like most married couples the Wheats divide and conquer the tasks that define their personal and professional lives based on each person’s strengths and preferences. As the spokespeople for their store, each brings certain skill sets and work experiences to the shared responsibility.

“My background is in merchandising and marketing so I do most of the behind-the-scenes work,” said Tyna. “When I have my merchandising hat on, I sit on the merchandising and marketing committee for Leading Jewelers Guild where I strategically work with vendors and designers to bring the right styles not only into the store but into 150 stores within the group. We use our buying power to negotiate the best pricing and terms possible and that helps our store keep a competitive advantage.” 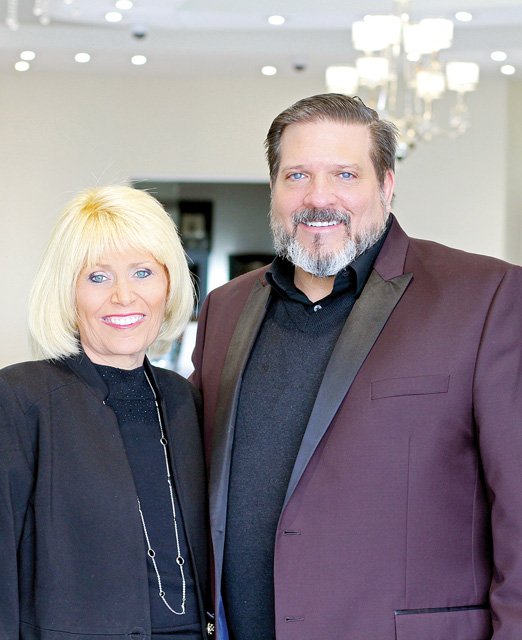 Tyna & Bert Wheat, owners of The Diamond Galleria.Bert’s day-to-day duties are driving sales, as well as financial and store operations. The couple’s unique business model, however, dedicates 50 percent of their annual advertising budget to community outreach efforts with mostly local agencies and non-profits. This has moved the ever changing and always growing “charity arm” of their business toward the top of the list of Bert’s responsibilities.

“Over the years we’ve discovered that the more we do for the community, the more it comes back to us,” says Bert. “The satisfaction of helping those in need is its own good. But being active in the community and speaking to the community about the causes we care about has helped bring attention to us and our business.”

Some non-profits have deeper meaning for the couple. Tyna’s parents both died from cancer and Bert’s father died from heart disease, making the American Cancer Society and the American Heart Association close to their hearts. Cause marketing has been amazingly effective for the Wheats. Demonstrating loyalty, in part through charitable giving, has garnered loyalty.

In addition to giving to non-profits and local agencies (as well as serving on committees and boards), the Wheats also host charitable events at their store. Along with regular store events, the Wheats and their staff host at least one event every month.

This is why the couple created a luxurious, high-end store with a lounge area, catering kitchen and a full bar. Hosting events is a flex factor in the “charity arm” of The Diamond Galleria. Effective cause marketing quickly ushered in a portion of the market potential to initially support their store and put it on a solid path for growth in their first five years by donating time and money and hosting charities.

“Donating to charities and hosting their events is a way to get people through our doors,” said Bert. “They attend one of our events and see the customer experience we provide. We have made many new customers that way.”

Tyna added: “Communicating and conveying our message of ‘The Diamond Galleria, Where the Tri-State Gets Engaged’ is done strategically through social media channels as well as digital advertising to reach younger customers that are just buying their first piece of jewelry.” 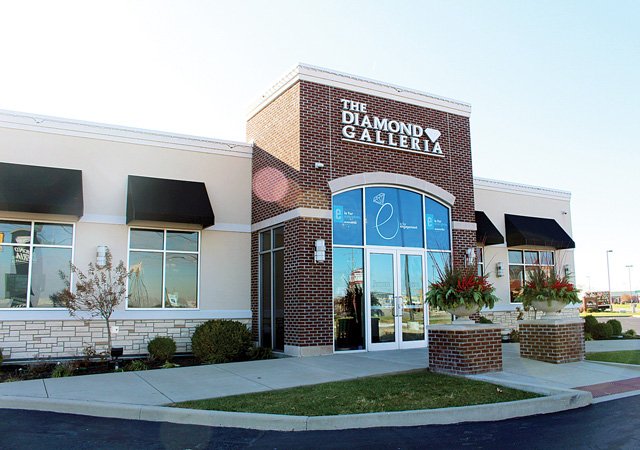 The Diamond Galleria in Evansville, Indiana.

On the other end of the age demographics, Tyna and Bert can cite many examples of older customers that have been shopping with a competing jeweler for years. When attending a non-profit or local event hosted at their store, people typically get to know The Galleria Diamond store and their staff in a more personal manner, through a charity that deeply matters.

“People that have been shopping with another jeweler and then see our store and connect us with a charity they care about – that’s powerful,” says Bert.

Perhaps one of the most exciting community outreach efforts recently for the Wheats was hosting a sales event for nurses. The Wheats have a heart for the medical community, and after having a personal experience with the nursing staff at a local hospital, they wanted to use their business to show their appreciation. Nurses and hospital staff at local Deaconess Hospital were provided a voucher to be used at The Diamond Galleria.

This size of a gift was a risk (the amount totaled over $100,000), but the Wheats felt strongly that it was deserved by the nurses and that it would be a good decision for the business. In fact, the effort surpassed their expectation as they received an outpouring of thanks, both online and in person, from Deaconess nurses. And, as many decided where they were doing their holiday shopping, several large sales came from new customers who wanted to spend their money at a local jeweler who feels so strongly about giving back.  This year, back to school sounded the bell for a teachers’ appreciation week in September. 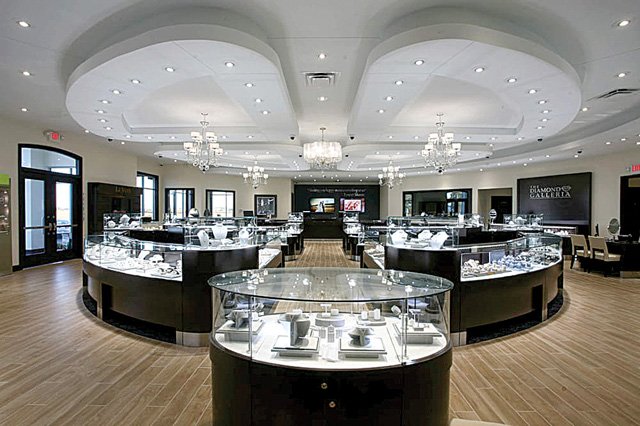 The Wheats created a luxurious, high-end store with a lounge area, catering kitchen and a full bar, perfect for hosting charitable events.

In addition to accessing the buying power to source fine jewelry and quality gemstones, the Leading Jewelers Guild members advised the Wheats on how best to build a store that would put them in the upper echelon of retail jewelry. This top-tier approach allowed Tyna and Bert to confidently align themselves with “the best of the best” in Evansville’s bridal businesses.

“We all support each other’s businesses in many ways,” said Tyna.

Comfortably in their Boomer years, as with most tech-savvy “digital immigrants” the Wheats are old enough to know that social media and all digital marketing are powerful tools in the promotional and marketing toolbox. But it takes a Millennial or Gen Xer to really wield these tools in powerfully creative ways. Enter the ladies from Thrive Marketing Strategies.

Headed by Alissa Fricke, owner and principal marketing strategist, the team at Thrive has The Diamond Galleria strongly represented on just about all social media websites, including Facebook, YouTube, Google Plus, Pinterest, Instagram and geo-locating Foursquare. “We don’t do much with Twitter,” says Tyna.

It’s all about reaching different demographics for the Wheats and the Thrive ladies. Older folks are finding the store and staying current on posts with Facebook and YouTube to a lesser extent. For younger demographics, it’s all about Instagram and Pinterest. Of the two social media websites, the Wheats are stronger on Instagram.

Perhaps the most creative use of social media for Tyna and the Thrive ladies is connecting with what they call local “influencers,” people in the area that have a large social media following of their own. “We do a lot of online research, networking and meeting with people in the area to be influencers,” says Alissa. “It’s mainly to connect with younger demographics, like college age women looking to get engaged.”

Tyna and the Thrive ladies have brought on many influencers over the years. An example of the mutually beneficial “influencers” relationship is connecting with a social media savvy local sorority and helping the college women raise money for their philanthropy efforts.

Tapping into resources in their backyard in their spokesperson roles has been huge for Tyna and Bert. Be it sorority sisters with a huge social media following, honoring local nurses and teachers, or partnering with leading cross-promotional businesses in the area, it didn’t take long for their immediate and outlying markets to get to know the Wheats and their store.

Readers: At press time, Tyna and Bert Wheat were celebrating their 30th wedding anniversary in Costa Rica, along with their son Nate. Upon their return, Tyna lost her battle with cancer. For industry members that would like to make a donation to the Tyna Wheat Fund, please visit http://bit.ly/TynaWheatFund.