Barely two years ago, Connie Garcia had no idea that watchmaking –  her father’s lifelong profession – would become her passion too. Born and raised in Garner, N.C., Garcia, 23, is the youngest of five children and a self-described “daddy’s girl” who watched her father at the bench and rode with him on his rounds to area jewelry shops from the time she was 5 years old.

Now she’s enjoying recognition as she begins to embrace her future.

“The people at the jewelry stores remember me from when I was a little girl, doing drop-offs and pickups,” Garcia says.

As a recent graduate of the prestigious Nicolas G. Hayek Watchmaking School, named for the Swatch Group founder, she works alongside her dad, Miguel Garcia, as they plan together for the next big thing: By the end of this year, they expect to move into a shop outside of the home, and Connie will eventually take over the business.

“We’re working on getting our own location, and a website, and more clientele,” Garcia says.

Despite her upbringing at a watchmaker’s side, the timepiece bug didn’t bite without a nudge from her mother, Susie, in 2019. Garcia was working as a chiropractor’s assistant and considering taking an online gemology course on the strength of her childhood love of sparkly jewels.

“One day I went out to eat with my mother and she asked me if I would carry on my father’s business,” Garcia recalls. “I thought about it for about two weeks, and then said, yeah, I’ll go for it.”

Soon after, Garcia applied to the highly selective Hayek school in Miami, Florida. The school operates in partnership with the Swiss watch industry to offer the prestigious WOSTEP (Watchmakers of Switzerland Training and Educational Program) certification course – traditionally a 3,000-hour program that includes manufacturing training – which recently launched a one-year, 1,800-hour course that leads to WOSTEP watch technician certification.

“We were the first class after they cut it from two years to one,” Garcia says.

The tuition-free program requires students to purchase their own tools and arrange their own housing and meals. Students spend their days in class or lab, with hours like a full-time job, and must pass three rigorous intermediate tests and a final examination to earn certification in after-sales service of Swiss watches.

Only six applicants are selected each year. The acceptance process involves a two-hour bench test and an interview with faculty.

“They have you do certain activities, and after I did them, I thought, ‘Wow, I really hope I get accepted.’”

Garcia wasn’t sure it would happen, because despite her early years of tagging along with Dad, she had no real experience with watchmaking.

“During the actual interview, they would ask, ‘Have you learned this from your father, have you shadowed your father.’ I just told them no. I answered honestly,” she says. “And the same day I was accepted, I was talking to my boss and saying, ‘I don’t think I’m getting accepted, but I’m OK with that. Then later that day they called me and accepted me!”

Alex Estabillo, who interviewed Garcia and was her instructor, said Garcia showed strong mechanical skills during her bench test and her interview went well too.

“Personally, her positive attitude brought a lot to the table. And just mention of her father being a watchmaker, without her having trained under him, made a connection,” Estabillo said.

Garcia describes the school as very diverse, with only one of her five classmates in her age group and the rest a bit older. Three already lived in Miami, one was from St. Louis, and another moved from Orlando to Miami to take the course.

“We became very close. At lunch we sat at the same table and talked about everything… The school is attached to the watch repair side, so we’d see everyone there who had graduated before.” 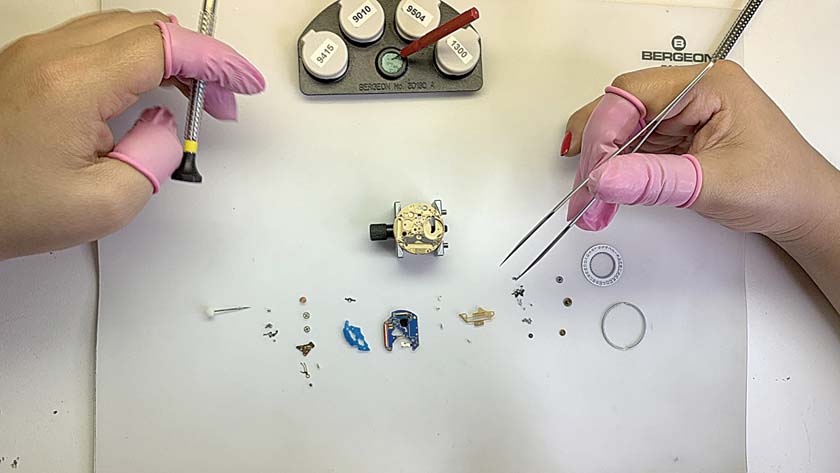 Since graduating in September 2020, Garcia has worked as an assistant to her father as they plan to grow the business outside the home-based shop – a step that was delayed by the pandemic.

While her WOSTEP certification targets Swatch Group watches including Omega and Hamilton, her father has broader experience.

“My dad works on all types of watches. It’s fascinating!”

Garcia says her father has been a watchmaker all his life.

“He learned from his father, back in his hometown in Guatemala, then he moved to California where he worked for someone until he decided to go his own way.”

On a typical day, Garcia repairs watches her father has set out for her.

“If I finish early and he’s there, I’ll ask if there’s more to do. If he’s not there, I look through the jobs that are ready and see which ones I feel comfortable doing.”

Her father prepares completed watches for delivery and invoicing, and they go together on their twice-weekly runs dropping off and picking up repair jobs in the area – Greensboro, Fayetteville, Raleigh, Apex, Sanford, Clinton and Garner.

As she develops her technical skills, Garcia sees her biggest challenge for now is learning the business side of watchmaking.

“The prices – I feel like I don’t know how to do that yet… Me taking over the business, having the knowledge – that’s the biggest challenge, finally taking over our own location.”

But the watchmaking part is a different story:

“Talking to the jewelry store people, I’m the only one of a few who actually went to school for watchmaking and graduated!”