Cullen Wulf, owner of AaLand Diamond Jewelers in Merrillville, IN, thought he’d seen it all when he was helping the store’s previous owner expand gold buying at a mall-based kiosk in 2009. Boy was he wrong.

Years later, when he purchased the store, Cullen discovered he had only experienced a small sampling of customer interactions that leave many retail jewelers stunned in disbelief. After a while, Cullen couldn’t take it anymore. With no real outlet to vent his frustrations, Cullen did what most young people in their early 30s do – reached for his cell phone.

Cullen remembers the exchange that set his now famous Snap Chat customer exchange reenactment videos in motion. It was roughly three years ago when Cullen was having a lousy day. Then a customer came in claiming he “knew a guy” who could melt a bunch of small diamonds to make one big diamond. The customer asked if Cullen could perform such a service for him.

As Cullen’s videos prove, the Millennial-aged jeweler has an excellent grasp of his store policies, procedures and practices – rapid recall that’s needed when refuting or rebuking a customer’s claims. Coupling that with gemology essentials and jewelry making basics, and Cullen’s matter-of-fact delivery is the stuff of true professionals.

But Cullen’s claim to fame, as his reenactment videos will attest, is the patience of a Buddhist monk and the negotiating skills of a consummate diplomat. As much as these combined skills work in Cullen’s favor when dealing with difficult customers, every person has their breaking point, especially when a customer goes from gemology-challenged to just plain stupid.

“I was having a doozy of a day already, and then this guy walked in,” says Cullen. “After trying to explain to this customer that what he was suggesting isn’t possible, I had to do something.”

As a member of Jewelers Helping Jewelers (JHJ) Facebook page, a members-only social media group, Cullen decided to share his videos with the trade. If his videos were healthful and helpful for him as a vehicle for venting, perhaps laughter would be a good source of medicine for his retail jeweler peers.

“The video I uploaded to JHJ’s Facebook page wasn’t the very first video, but it was one of the first ones I produced,” says Cullen. “I uploaded it late at night. Went to bed. And thought nothing of it before trailing off to sleep.”

When Cullen woke up the next morning his cell phone was blowing up with notifications about the video. From instant messages, likes and shares to thumbs up and crying laughter emoji icons. His video was an instant hit.

After the melting diamond guy, Cullen was convinced it couldn’t get any worse. Then the next “doozy of a customer” walked through his door. Part of what makes people laugh when hearing a joke or humorous story is knowing there’s a kernel or several kernels of truth in the joke. But with Cullen’s videos, viewers get all the corn on the cob.

Since his first video, Cullen estimates he has produced and uploaded 30-plus humorous customer exchange videos. As the video numbers grew, the fun and the funny evolved. An early example would be the video where Cullen dealt with a customer that claimed his fiancée’s engagement ring “just fell apart.” 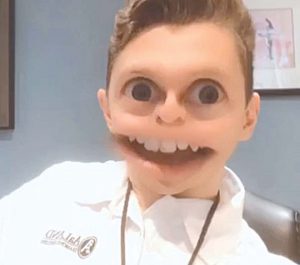 In the dodging responsibility themed video, Cullen used his usual shrunken head and big mouth Snap Chat filters for himself. When portraying the customer, filters of choice include a mustache and buck teeth. For added fun Cullen interjects familiar popular, trending and classic music favorites that are applicable to the situation. Pausing the videos for fake gulps of vodka is another Cullen favorite.

In this video Cullen went to the extreme of taking a similar ring out of his case, throwing it against the wall, smashed it under a chair leg a few times and then threw it out in the parking lot. Then the video transitioned to a close up of the abused ring only to demonstrate that it was not damaged in the least. When all of the humorous elements are combined in the editing process, Cullen’s videos become homemade, side-splittingly funny videos.

The videos start and end with similar messaging when Cullen commonly states he thought he had seen it all until the customer that inspired the most recent video comes along. And, the ending of the video is a “moral of the story” type of closing. In the case of the “ring just fell apart” video, Cullen calmly encourages jewelers not to fall for the scam and the scoundrel for the sake of retaining a customer.

Video topics run the gamut, from a social media influencer that streamed the sales presentation of a diamond ring then wanted it for free, to a divorced woman who asked Cullen to credit her card when her husband made the purchase considerably long after the one-month return policy on a separate card. Refusing to commit credit card fraud and standing firm to his store’s policy earned him an unsavory curse word and being sprayed in the face with water.

Cullen entered retail jewelry purely by accident. He was interviewing for another job when he ended up discussing an internship with a jeweler. Working in a jewelry store and buying gold from customers was strictly going to be a summer job while Cullen worked his way toward a degree that would help him get into the finance and banking sector.

But after doing retail jewelry for over a decade, Cullen has discovered his career path was no accident. He’s right where he should be producing not just humorous customer exchange videos, but also videos that come from the consulting side of his business and his brain. Whether it’s funny or informative, Cullen’s videos are worth the watch, share, crying laughter emoji, thumbs up, or just plain like.

You can check out Cullen’s videos on the Jewelers Helping Jewelers Facebook page.