Paul Pearman will tell you his business is all about vanity. Not just the vanity of the men and women who spend thousands of dollars to wear one of his unique micro-mosaic buckles or butterfly cuffs – but vanity on his own part to create intricate pieces of wearable art. 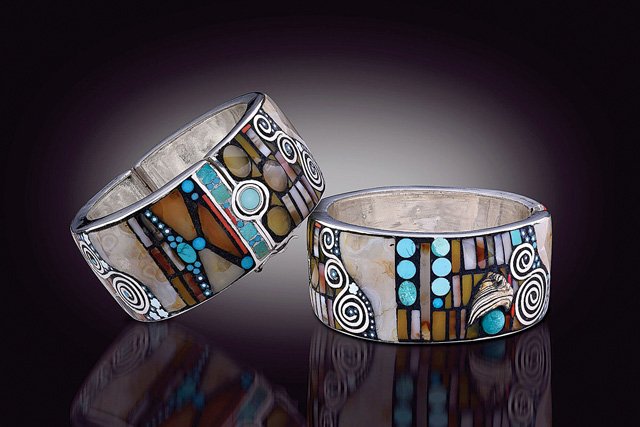 “If I weren’t so vain, I’d quit the need to create something beautiful,” he laughs. “It’s a weird kind of vanity. I’m an ugly guy . . . at least I have a chance to make something beautiful! I’m a silversmith; I didn’t learn the easy way, never had a lesson in my life. I’ve never learned anything the way you’re supposed to learn it. 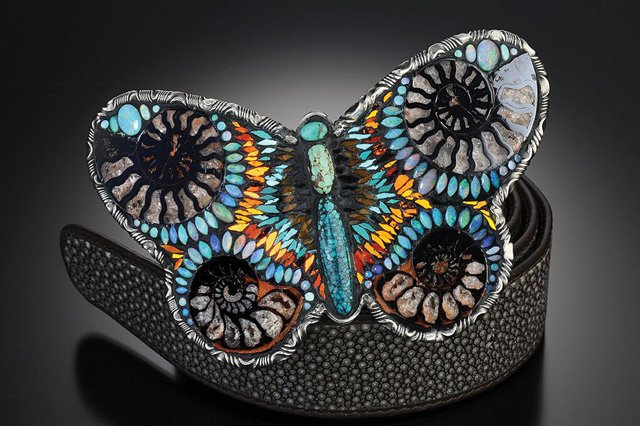 “In trying to sell art, you know that vanity is involved. Whether it’s something to hang on a wall or a belt buckle – people are naturally vain. If a woman tries on a belt buckle, and her hand touches her hip and her elbow goes out, she’s thinking ‘When I wear this belt buckle with this outfit at this party . . .’ Vanity stems from wanting to look good; art appeals to the primitive side. When I looked at doing belt buckles, it seemed like they were the weakest link in all of jewelry. Most people don’t want to do a Van Gogh that will fit in the palm of your hand. It takes the patience of Job.” 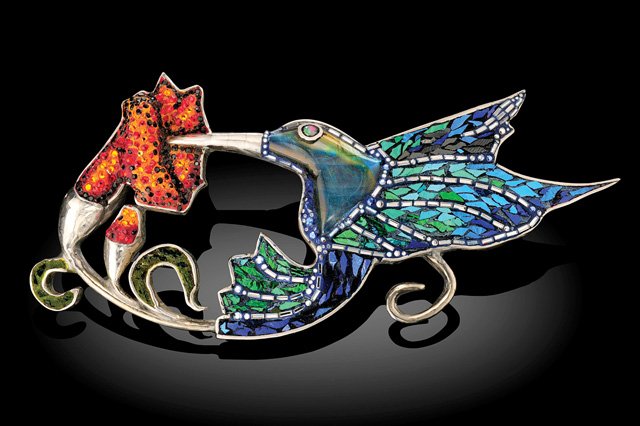 Butterflies, dragonflies and exotic moths of hand-forged brass or sterling silver – all salvaged from discarded scraps – with treasures such as Ethiopian and Australian opals, Tiffany glass, turquoise, jewelry-grade nautilus shells, trilobite, pearls, crystals, African labradorite, fossilized shark teeth, dichroic glass and amethyst sell for $4,000 and higher. Paul also offers “buckle-licious” gifts for $500 and under. He limits the signed and numbered pieces to no more than 200 a year, and prominent artists he lists as clients include Keith Richards, Steven Tyler, Carrie Underwood, Tanya Tucker and Darius Rucker. 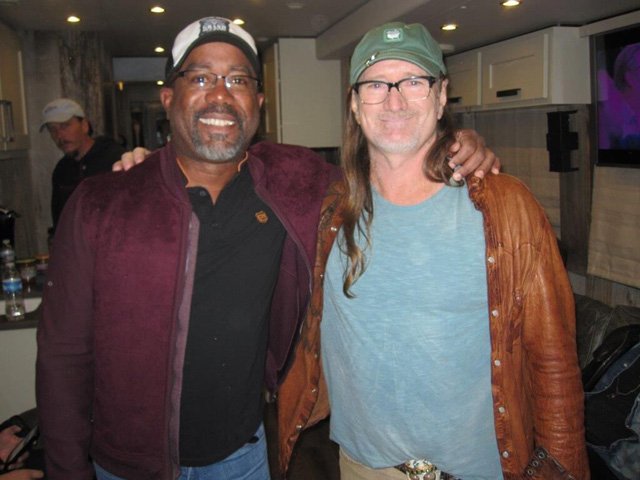 Paul considers singer/songwriter Darius Rucker one of his best clients.

Rucker’s wax likeness in Madame Tussauds Nashville is adorned with Paul’s buckle – and is the first of the Tussaud wax figures to speak, inviting visitors to check out his cool buckle. “This thing’s sitting there saying this day in and day out,” Paul says. “The fact that he picked my buckle is huge. I’ve never made anything for him that he didn’t buy. He’s an awesome guy, one of my best clients.” 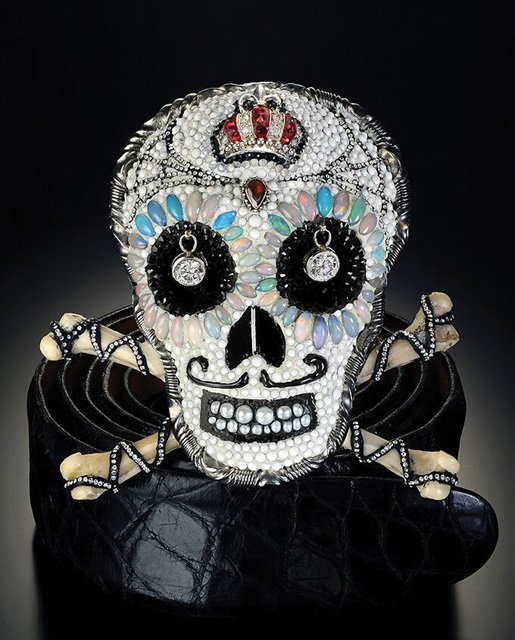 There seems no end to Paul’s creative ideas. “I do a lot of sugar skulls – they’re hot, especially out West,” Paul says. “I like the theory of it – the Day of the Dead, the ancient tradition where they have a giant meal and leave an empty place setting. I’m now working on a skull belt buckle with full headdress, with ‘feathers’ cut from silver. This headdress has 39 feathers that are all cut out by hand, then shaped and separated with a scroll saw. And that’s just the headpiece; the skull is to come.

“I love what I do. It’s crazy. I used to do all the art shows, but now I stick to the top 10 – there are so many unknowns with art shows. My clientele are more free-thinkers, specific thinkers who have their own money. They’ll tell their husbands, I don’t want ‘stuff,’ I just want something from Paul for Valentine’s Day or Christmas. And that’s good.”

Paul started out as an oil painter, selling his paintings for 20 years along with custom stained-glass transoms. “I looked around and noticed everyone is an oil painter. I didn’t want to compete with all of that and switched over to mosaic work as more of a fashion accessory, and I’ve been doing buckles for 23 years. I do all kinds of jewelry and all kinds of weird custom stuff.” Known the world over with awards including “Best of Show” recently in Sun Valley, he also takes on public works that may take 10 months to finish. 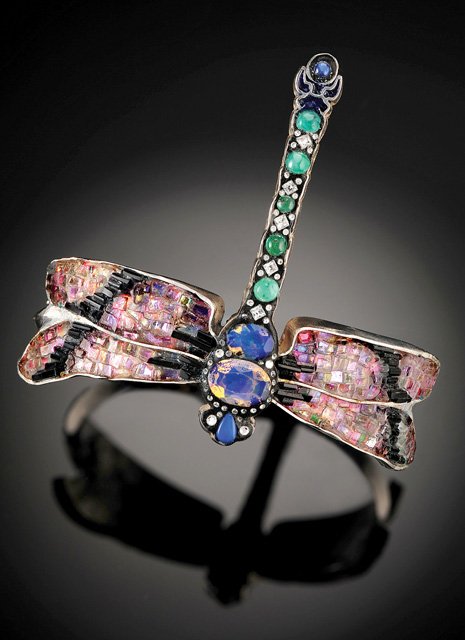 Paul grew up in Augusta, GA, home of the Masters Golf Tournament. “Augusta National is right by us – you could hear them roar when Tiger won.” Paul is a former professional athlete himself, snagging a world record in vertical skateboarding with a jump of 26 feet before his stint as a professional kick-boxer. “I still did artwork while I was doing that. Me making things, I don’t have a choice. Even now, I’ll carry a piece around in my pocket, pull it out and problem-solve.”

The artist fondly calls his studio “insane,” with panoramic views of the waterway feeding Georgia’s Savannah River. A 7-foot Lazy Susan – a “think tank” – is filled with raw rock organized by color. “I have two CAD machines, a laser machine and a big saw – mineral oil with a lemon scent cools the blade so the studio doesn’t smell like petroleum,” he says. “The blade spins so fast and pushes the rock so slowly, it almost polishes it as it cuts it. First you’re a silversmith, you finish with that part, then you become a lapidary guy who knows all about rock and how to cut it.

“Impressionistic artists lend themselves to mixed media and glass,” he adds. “I went that way, using different mediums. I’d do micro-mosaics with flower petals, stems and leaves. As tiny as it is, you nip the pieces of Italian glass, lay them out like a floral arrangement. A mosaic starts out rough and bumpy, but when I’m done, it’s perfectly smooth; it feels like a sheet of glass with no rough edges. It fits on your clothes and looks better. It’s more work, but it’s worth it.” 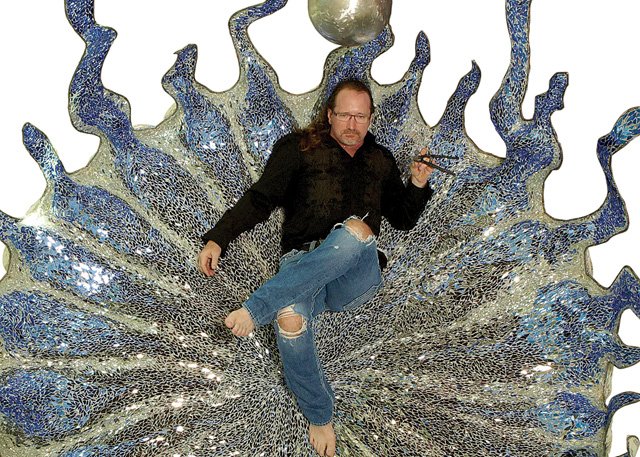 Paul Pearman atop a part of what would become a Society of American Mosaic Artists International Award-winning 3-story chandelier. 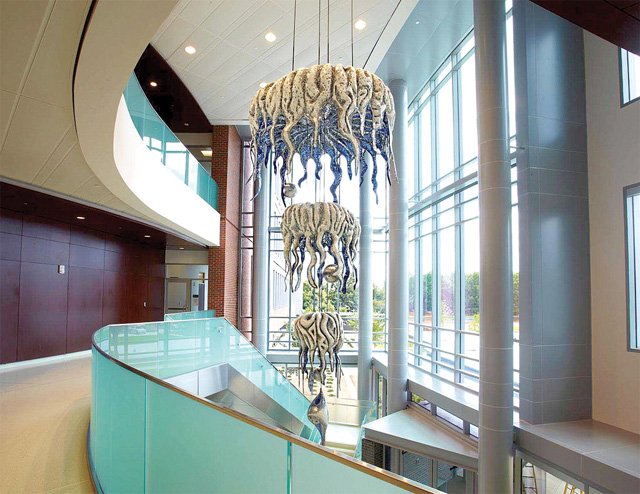 A crowd favorite is Seattle Blue, a giant blue mosaic horse whose name plays off of Triple Crown legend Seattle Slew. The fiberglass horse, originally a project for the Aiken Center for the Arts and the United Way of Aiken County in South Carolina, is covered with thousands of pieces of nipped glass in shades of iridescent blue. It was purchased for $10,000 and now stands as a landmark on a balcony in downtown Augusta. 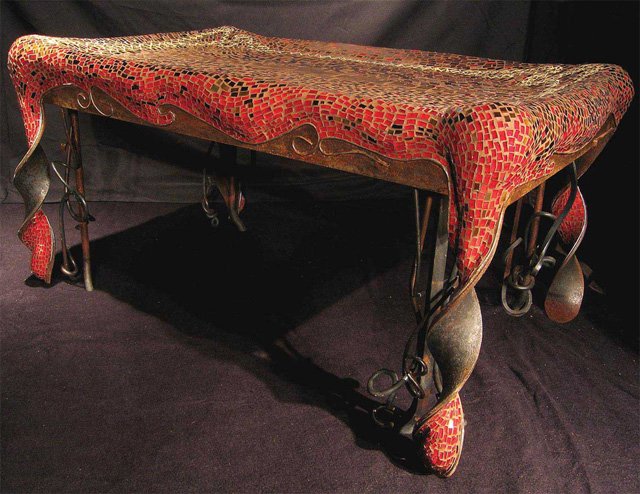 Last year, Saint Paul’s Church in Augusta called Paul to work on a Tiffany prayer bench that had been rescued from the Great Fire of Augusta more than a century ago. “I had to get a special insurance policy to have it in my house four months,” Paul says. “The mosaic work had largely fallen out, and it took me months to track down the Tiffany glass. I nipped the pieces and carved them on the machine until I had the perfect fit. Some of the tiles were actually ivory. So I found an ivory statue at a garage sale. I cut it, and it was too bright so I stuck the ivory in a cup of coffee. It came out the exact right color. 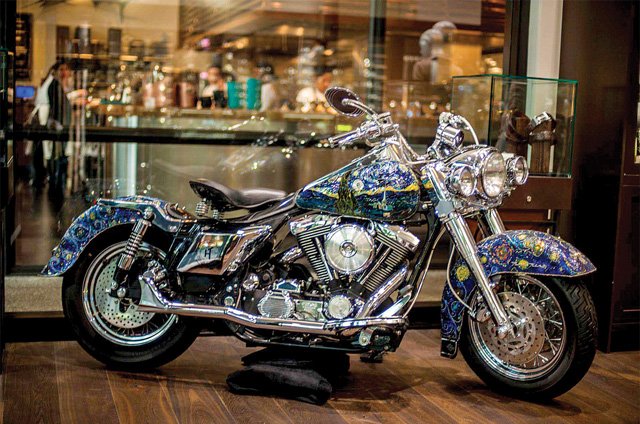 “I once took a 1998 Harley Davidson, removed the fenders and gas tank, sandblasted it, created (Van Gogh’s) Starry Night in stainless steel and wrapped it around the gas tank. I did the fenders to look like the sky.” The bike sold for $230,000.

Paul has created Persian-style floor inserts based on different rugs he’s seen, with fringe and center medallions. “It takes a long time, and I don’t make any more off of them than I do for jewelry, maybe a dollar an hour,” he jokes. “I’m doing one for a house now. I also just built a clock that looks like a woman’s eye, a little sleepy. A tear hangs down, and the tear is the pendulum.” Paul’s website features a nice collection of whimsical clocks.

In his artist’s statement, Paul says: “For as long as I can remember, designing has been a compulsion: an I-can’t-sleep-at-night impulse that fills my head with shapes and colors usually in the language of mosaic . . . I never do the same thing twice; and there’s so many combinations that it never stops. I HAVE to create . . .”