Estate jewelry business partners Kate Peterson (CEO and president of Performance Concepts) and Patti Geolat (founder and CEO of Geolat Companies) have seen a lot in their years of serving the gem and jewelry industry. But nothing could have prepared them for the find of a lifetime in February when Geolat Mondial, the event and brokerage arm of Patti’s business, purchased one of the largest and most significant cameo collections of its kind ever assembled. Retail customers were able to view and purchase cameos from this incredible collection at two Midwest jewelry stores in May as part of a unique estate jewelry event.

The story of how this massive cameo collection became available to vintage jewelry consumers starts with the two women that sourced it from a private estate in February. Patti created her personal property appraisal and jewelry brokerage company in 1985. Kate started a sales training and business management consultation company, Performance Concepts, in 1997. Although the two had been industry colleagues and friends for many years, it wasn’t until 2010 that they collaborated to create a “hybrid store event” that combined estate jewelry buying, selling and trading.

These special estate jewelry events have been hugely successful for the collaborative partners and the many retail jewelers that have hosted them. Four years later their extensive network of industry contacts put Kate and Patti in touch with a Frederick, Maryland-based jewelry store owner that was closing out the estate of a long-time client and family friend. As the primary jeweler to the family, the store owner sold off several diamonds and informed Kate and Patti that, “a few cameos and some jewelry were left” for them to consider purchasing.

Within driving distance from Kate’s residence, she arranged to visit with the executor of the estate. Upon arrival, Kate discovered the store owner didn’t have a complete idea of the true depth and breadth of the cameo collection. “What I found when I got there was the most amazing collection of cameos I’d ever seen,” says Kate. “After three hours of looking at pieces, one more exquisite than the next, I called to talk with Patti about making the collection a part of our shows.”

After several hours of examination, Kate counted 49 cameos. Lily, the woman who spent 53 years collecting her cameos, had a passion for jewelry with a flair for the eccentric. She insisted on wearing a large, old, 10K diamond “V” necklace every day despite her daughter’s protests, according to Kate. Lily also kept a “jewelry diary” where she wrote down detailed notes about each cameo, including how she came upon finding the piece, when and where it was purchased and in some instances adding in comments about an occasion or specific interest in a cameo.

Knowing that the story behind the jewelry helps sell it, Kate and Patti began researching known cameo collections. “From everything we’ve seen, it appears that this is one of the largest and most diverse collections of fine quality cameos ever assembled by a single private collector,” says Kate. “The collection was also especially well curated. And, each piece was chosen for some unique feature or for the special quality of craftsmanship.”

The collection has many pieces that possess rare, unique qualities that add to the value. In the pictured group image, these cameos are “remarkable for their elaborate scenes and detail,” says Kate. The first depicts the expulsion of Adam and Eve from the Garden of Eden. The second is a detailed scene that combines dimensional, architectural carving with full figure characters in a musical motif. And, the third showcases the motion of muses using elaborately detailed carving techniques, according to Kate.

The first cameo in the second row is rare and valuable because of the unique, full body carving. Next to it is an unusual left-facing image (most head-carving cameos face right). And, the final cameo carving is of lilies of the valley, and was a favorite of Lily, the original collector.

The cameo collection in its entirety made its debut appearance at Scheherazade Jewelers in Edina, Minnesota, as part of a three-day estate jewelry event organized by Kate and Patti from May 2-5. “Our [event] preview created quite a stir and new interest in the collection, the story and the desire for our customers and our staff,” says Susan McClain, the store’s general manager.

The following week the same estate jewelry event with the cameo collection went to Lasker Jewelers in Eau Claire, Wisconsin (Lasker’s has a second store in Rochester, Minnesota). “I was pleasantly surprised to learn that for the most part customers didn’t see the cameos as old people jewelry,” says Nicole Lasker, vice president of Lasker Jewelers. “The customers liked the one-of-a-kind quality of the cameos and that each was very unique and hand-made. And, the staff had never seen such different varieties and qualities of cameos.”

The collection returned to Scheherazade’s in late May for a month-long selling event. At press time roughly one-third of the cameo collection was sold to customers between the two stores. This has inspired Kate and Patti to find more cameos to add to their estate jewelry collections with Millennials showing strong interest in estate jewelry in general and cameos in particular.

“There’s the green aspect of estate jewelry that it is ‘recycled’ jewelry coming to market without environmental or social stresses,” says Patti. “Today’s consumers also want Old World craftsmanship that can’t be found in current productions. Millennials also like to own pieces that have a connection to their own lives. For estate jewelry and cameos its jewelry worn by their mothers or grandmothers.”

But there’s more to the cameo trend than a strong interest in quality craftsmanship from bygone eras, stewardship of the planet or tacit connections to family members. In 2010 cameos were being talked about in fashion reads of all types, from iconic fashion print magazines to fashionista blogs. Cameos are no longer a “grandma thing,” with fresh new ways to wear traditional pieces and new cameo production that pays homage to Old World artisanship.

In 2012 Prada’s sub-label Miu Miu became a driving force propelling the cameo trend for the fashion-aware. “Cameos are in the third or fourth year of a seven-year fashion cycle,” says Paula Peterson, president of Crown Luxury Consulting. As a consultant for luxury brands and an expert on luxury trends, Paula has observed a number of looks driving the cameo trend.

Paula sees the cameo trend going for another three to four years. But it isn’t old production fueling the cameo trend. UK-based designer Stephen Webster created modern day cameos back in 2005 with his brand of tuft-topped female silhouettes in pink and blue wedgewood cameos. In more recent years Italian designer Amedeo Scognamiglio has created many contemporary cameo jewelry designs. The birthplace of cameo jewelry, the Italian designer has taken cameos in a completely different and modern direction while remaining loyal to the quality and craftsmanship associated with cameos. 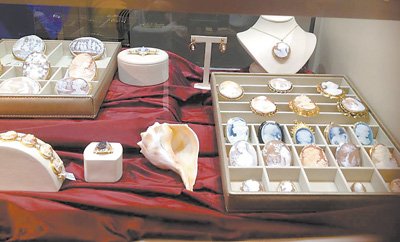 In the heyday, Miu Miu created modern versions of cameo jewelry, but in a very streamlined fashion with fewer details. Miu Miu cameos are framed and complemented with colorful gemstones and designs. Amedeo Scognamiglio has many traditional cameo designs, but also has its share of funky, edgy cameos – most notable is the hear no evil, see no evil, speak no evil three monkeys (pictured above) and numerous skull cameos.

For the foreseeable future, cameos have made a strident comeback, in both traditional and modern interpretations.