Jewelry at the Museum I and II

In most people’s lives, they only have a single opportunity to visit the Smithsonian Museum. But for jewelry designer Brenda Smith, founder of Brenda Smith The Art of Fine Jewelry, she has had two pieces of jewelry submitted to the esteemed museum in the last three years.

After a career dedicated to creative work, Brenda reinvented herself and became a jewelry designer in 2009. She doesn’t come from a jewelry background or a family business history in the business. But, designing, forging precious metals and completing color palettes with gemstones, was a natural extension of her creative work in graphic design, advertising, creative director at a college and a marketing manager for a large manufacturing company – her final corporate job before her career shift to a jewelry designer.

Brenda started with stringing beads. Although a logical first step for any beginning jewelry designer, she needed more. “That [stringing beads] satisfied me for about two weeks,” says Brenda. “Then I took silver- and goldsmithing classes, and I was hooked.”

After her completion of fabrication curriculums, she dove into gem cutting classes, gem identification course work, and pearl and diamond grading programs. “I was like a sponge,” says Brenda. “I wanted to absorb as much as possible about this industry.”

Brenda absorbed so much design and fabrication knowledge that she created a deluge of jewelry pieces to sell. Local craft shows seemed a logical first place to reach retail customers. But her finely crafted, one-of-a-kind designs were not the best fit for craft show goers. New to selling directly to jewelry consumers, Brenda wondered if her jewelry designs were good enough to be considered fine jewelry.

Taking Master Design Classes at Revere Academy in San Francisco served to answer this question in spades and then some. Encouraged by Alan Revere, the school’s namesake, Brenda entered her jewelry into the industry’s leading design competitions, starting with the American Gem Trade Association’s (AGTA) Spectrum Awards. But first, she had to become an AGTA member.

As a member of the gemstone trade organization, Brenda exhibited her designs in the Designer Showcase section of the Tucson Gem Show in 2010. The gem show helped Brenda get noticed as a budding jewelry designer, but even more valuable was networking with other exhibitors as well as show organizers and attendees.

Repeat exhibitions at the AGTA Gem Show allowed Brenda to make important connections with Shelly Sergent, of Somewhere in the Rainbow (an organization dedicated to bringing education and enjoyment of colored gemstones to museums), Russell Feather and Jeffrey Post from the Smithsonian Museum of Natural History, and Adam Graham, then marketing manager for the AGTA.

One of the key roles for of the AGTA’s marketing department is red carpet event celebrity product placements for jewelry set with colored gemstones. During the Emmy Awards in 2013, Brenda’s “Celebration Pearl” earrings garnered “much interest.”

Completing her design work at Revere Academy, exhibiting at the AGTA Gem Show, placing first in the Cultured Pearl of America Association’s (CPAA’s) International Pearl Design Competition, and having her jewelry designs considered for celebrity placements at red carpet events were clear signals Brenda was a designer of fine jewelry. She also defined and refined her own design philosophies and individual approaches to creating one-of-a-kind jewelry.

“For me, jewelry design is the same as any other design, whether it be interiors, landscapes, fashion, or automotive,” says Brenda. “It’s just a different medium. It is about creating interest with contrast, utilizing color, texture, and size, to name a few.”

At this stage of her jewelry-designing career, networking continued to be just as important as creating unique fine jewelry designs. “Networking seems to be the momentum that is moving me forward at this time,” says Brenda. “Having pieces in the Smithsonian catches people’s attention, as well as commissions from Somewhere in the Rainbow. Through it all, I continue to meet more people in the industry.” 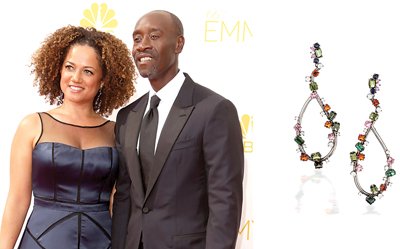 The effort has paid off – and handsomely. At last year’s Emmy Awards Bridgid Coulter, of Showtime’s “House of Lies” fame (and wife to actor Don Cheadle), wore the designer’s “Wright Hoops” earrings. From the designer’s Wright Collection (inspired by the late famed architect Frank Lloyd Wright) the blackened 18K white curved hoop style earrings are set with a variety of colored gemstones in a number of cuts and shapes. 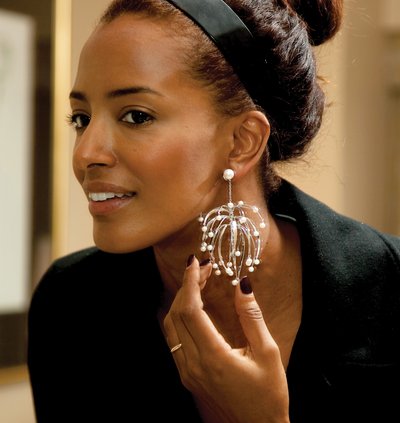 As if that weren’t enough for a pearl earring design, celebrity stylist Michael O’Connor recommend that actress Ella Thomas, from “All My Children” and “NCIS”, wear Brenda’s “Celebration Pearl” earrings at the Academy Awards in 2013.

This year Brenda earned her first AGTA Spectrum Award in the Object of Art category for her Light My Fire convertible sculpture. The centerpiece of the award-winning necklace is a large Oregon Sunstone carved by master carver Darryl Alexander. Complementary “matchstick” links creates the necklace chain. 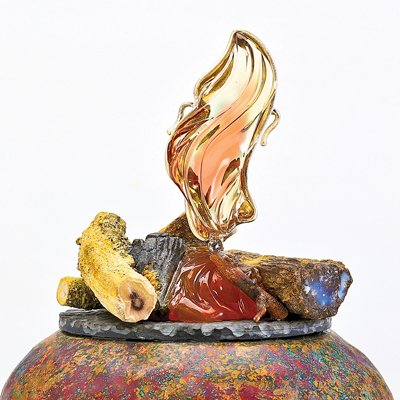 Although Brenda has earned a number of design awards and industry accolades, one of her leading achievements was having two of her designs featured in the Smithsonian Museum. In 2014, Brenda was commissioned to create an 18K white ring set with amethyst from Arizona’s famed Four Peaks amethyst mine. 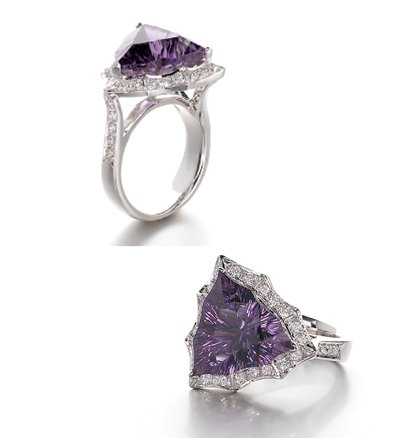 In 2015, she was again commissioned to create a pair of earrings for the Smithsonian Museum. Inspired by the wrought iron gates known throughout the South, but especially in Charleston, SC, the “Southern Charm” earrings were fabricated in blackened sterling silver to resemble wrought iron. For added texture and color, the 22K yellow gold leaves in the design are hand-forged. And, for even more Southern charm to this pair of earrings, all the pearls are natural pearls from the Tennessee River. Brenda worked with Gina Latendress of the American Pearl Company to source the pearls. 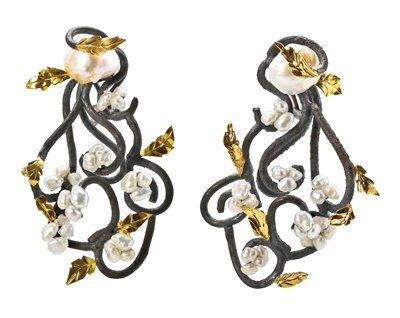 “These pearls are extremely rare,” says Brenda. “The amount of pearls I used was about 20 years’ worth for one [pearl] diver.”

Given Brenda’s multiple pearl jewelry design awards from the International Pearl Design and CPAA, she was recently commissioned to work on an extraordinary rare group of pearls for a client. Brenda is currently creating a pearl necklace of 27 matched, graduated round freshwater cultured pearls ranging in size from 17mm to 20mm.

“These fresh water pearls are new to the industry, so new; they are the only ones in existence,” says Brenda.  “It would take many years to recreate them. The seed beads are crested from the giant ocean clams that can grow to eight feet in diameter. The clam shells are used for the seed beads because the shells are thick enough to create these large diameter pearls of up to 20mm.”

For the designer, the problem then becomes how to drill the pearls. Current machinery used for drilling pearls is set up for much smaller pearls, and the material is so hard that special bits have to be used to prevent overheating. When completed, this museum quality necklace will certainly be one-of-a-kind.

Awards, accolades and museum placements aside, Brenda’s day-to-day as a self-proclaimed “Passionate Jeweler” finds her working out of her studio in Woodstock, GA. She describes her actual work title as a “personal jewelry designer.” 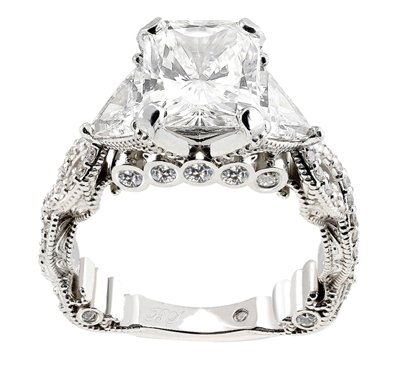 She’s currently working on an engagement ring for a client in Pittsburgh set with an internally flawless 5-carat, GIA-graded radiant cut diamond. The center diamond is flanked by two sizable triangle shape diamonds and features a number bezel-set and bead-set round brilliant diamonds. 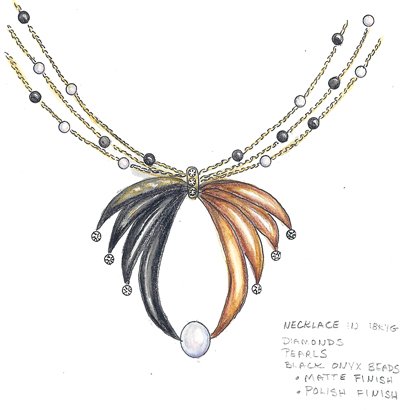 For now, Brenda will continue to work with her “personal jewelry designer” clients, creating Smithsonian Museum worthy pieces, and craft award-winning designs, as well as selling wholesale work to jewelry stores and galleries. It’s what she’s been doing since the early start of her jewelry-designing career and she shows no signs of slowing down.