Michigan gem cutter rallies jewelers across the U.S. to collect books for schoolchildren in Tanzania

by Liz Pinson
Share on FacebookShare on Twitter
Reading Time: 12 minutesAfter decades of traveling the world in search of precious stones, it was a school in Tanzania that proved to be the diamond in the rough that sparked passion and captured the heart of Michigan gem cutter and designer Roger Dery.

The school’s basic needs were striking when Roger visited five years ago with Sune Merisheki, a friend from Tanzania. Beyond the physical situation – windows without glass, rugged benches and tables – it was the meager, tattered library serving learning-hungry students that made an impression and prompted a mission. Having enlisted the help of jewelers across the United States to collect books for his cause, Roger will be accompanied by some of those jewelers in January when he and his wife, Ginger, deliver the books directly to The Kitarini Maasai Children’s School.

Sune, a Maasai who lives in the city of Arusha, has been instrumental in the mission. “I met him in the summer of 2009,” says Roger, owner of Roger Dery Gem Design and Spectral Gems in Royal Oak, Mich. “We happened to run into each other on the street and started chatting. I realized he was in the gem trade. He spoke good English; he was a friendly, personable, soft-spoken guy, just a genuine guy.

“I met him at the Arusha gem fair the following year. I was chatting with Sune and his wife, Pia, and I asked them if they’d mind taking us someplace interesting. He took us to various places in Northern Tanzania, and one of those was Kitarini. It was charming, enlightening, and it tugged at our hearts. We felt a desire to contribute to what was going on there.

“One thing led to another. These kids basically had nothing; they were living in grass huts in rural Tanzania. At that point they had two school buildings. They called them ‘finished,’ but they had openings for windows with no glass. I was traveling with another friend in the gem trade from Thailand. He tossed in a couple thousand dollars as a way of contributing to finishing a third building whose walls were up, but there wasn’t a roof. When I came back in the summer, a roof was on the building.

“A light bulb went off at that point in time, and we took it from there.”

A Book for Every Child

About 450 students, ages 5-14, attend the Kitarini school in Tanzania’s Longido district near the Kenyan border. Most are between the ages of 7 and 11. With a headmaster and four teachers, the school teaches through 7th grade, which is roughly equivalent to 5th grade in the United States.

Time for reading is scarce for the Kitarini children. Situated about 3 degrees below the equator, it’s light at about 6:15 in the morning, and it’s dark at about 6:30 at night, Roger says. “The kids are walking to school at roughly 7:30 or 8 o’clock in the morning, and most of them have to walk several kilometers (up to 3 miles) to get to school. They’re in school 9 to 3, then they’re walking home. They have maybe two hours of light if it’s their day to read a book. And most of these kids have chores with the family – they have to take care of cattle, goats or sheep, so their time to read is limited. When they get a book out of the library, they need about one to two weeks to actually finish a book.

“We would like for each child to have one book at any given time. The kids who are 6, 7, 8, 9 – those are the ones we want to reach. We feel like if they have an opportunity to practice their English, they’ll use it. Most of these kids, at age 8 or 9, speak Maasai, Swahili and a little English that they’re taught in school. We’re hoping that if we supply books for them to practice with and that are fun to read – that they’ll choose to read. It’s a different kind of thinking, and that’s what we’re encouraging them to do, to read on their own without someone saying, ‘You have to read this by tomorrow.’ If we have 1,000 books there for these 450 kids, they can rotate the books in and out.”

The school is in the process of building a small place to protect the books from weather, Roger notes. “It isn’t like they have heating and air conditioning.”

In mid-November, preceding January’s trip with the other jewelers, Roger was embarking on his 24th trip to East Africa accompanied by Ginger, who’s made five trips with him. They’ll take two suitcases each filled with books in addition to their regular luggage.

Traveling together is easier now that their daughter, Rachel, is grown – and busy in the jewelry industry herself, working in marketing and public relations for both Roger Dery Gem Design/Spectral Gems and Orin Jewelers near Detroit. Learning from her father, Rachel is a gem cutter as well, faceting her first gemstone when she was just 7.

Roger, whose father was an engineer with Chrysler, became a pipefitter, steamfitter and welder after high school. “After 10 years. I looked at other people in the field, and a lot of them had a missing finger or had to have their shoulders reworked . . . I was close to 30 and wanted to move in some other direction. A friend and I looked at options, and we were both enamored with the gem business. I went to the library and researched the gem trade; I read articles in JCK magazine and National Jeweler. In February 1981, we left for India and Sri Lanka to buy our own goods. We were there three months, spent a lot of money and came back and opened up shop in May 1981.”

Starting out as a colored-stone dealer, Roger learned to facet gemstones in 2001 and has developed into a precision faceter whose local and national awards include second place in the 2012 American Gem Trade Association “Cutting Edge” Competition. Roger also served on the Gemological Institute of America Michigan Alumni Association Board for six years and on the GIA National Committee two years. In addition, he was the first vendor to serve on the Michigan Jewelers Association Board and is also a past president. 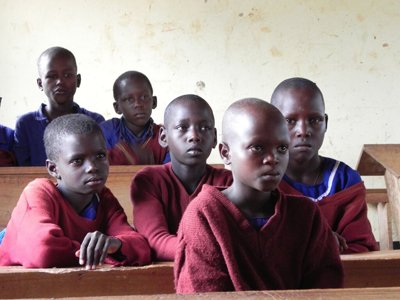 The nationwide book drive has been a little overwhelming, admits Roger, who has contributed to the Kitarini school in the past with financial scholarships and supplies. Nine jewelry stores and counting are committed partners, working toward the goal of filling a large suitcase on wheels with 50 books. Jewelers can continue to send boxes of new or used books – early chapter books, picture books, workbooks, coloring books – fun books that kids ages 5 to 13 or 14 would enjoy reading. When Roger and Ginger present the books to Kitarini’s headmaster, they’ll leave the suitcases there.

“A few more stores have come to us recently and want to be included in the project, so we’re developing how we’re going to handle that,” Roger says. “On the patio at my house I have nine or 10 suitcases! We did an event at California’s K-Jon’s Fine Jewelers and collected enough books for nine suitcases. We’re at about 650 pounds of books.”

Roger says it’s been cost-effective to collect the books at Gemstone Roundtable events he’s hosted around the country. “The jewelry stores will collect books before we arrive, and we’ll take the books with us. As a frequent flyer I don’t pay for luggage; I can take those books for free and then take them to Africa for free. It’s a cycle of convenience on both ends.”

As an alternative to contributing books, Roger says, jewelers may consider contributing to The Devon Foundation. The president and founder, Nancy Schuring, is the owner of Devon Fine Jewelry, an AGS store in Wyckoff, N.J. She’s featured in the documentary film “Sharing the Rough” – along with Roger and his Tanzanian friend Sune. The film “highlights the miners of East Africa while following the lifespan of a gemstone, from mine to finished jewelry.” American Gem Society Guilds and independent jewelers pay a fee to show the film at private screenings for clients in their hometowns. More information about the film is available at www.sharingtherough.com.

“Nancy and I traveled together to Madagascar in 2008,” Roger says. “She’s always been passionate about colored gems. We became friends, and she said, ‘I’m thinking of starting a foundation to support lapidary students in Africa – Madagascar, Tanzania, Kenya.’ She created a 501c3 nonprofit so she can accept and disburse funds, and now they’re distributing funds through East Africa, primarily for lapidary students.” More information is available at www.devonfoundation.com.

“She was passionate about contributing to others as we are, and it was a nice fit,” Roger says. “She pulled it all together and formed the foundation. It was a natural progression of the way to go. At the school we’ve been supporting in Tanzania we have put 13 kids through on scholarships to become lapidary artists. This past June, we delivered our first American-made faceting machine to the school in Arusha, and we’re taking another in January.

“It has been good all around.”