Morris Jewelry: The people have ‘It’

It’s the people who make the difference at historic Morris Jewelry in Bowling Green, Kentucky. For “the two Jims” – store owner Jim Steen and marketing-sales associate Jim Sears – the six-person operation on Fountain Square connects like cousins with the community to create that certain something.

“What separates us from others is my team: folks who talk to everybody,” Steen says. “We have a strong family-oriented theme. You can have whatever you want, a big building, whatever, but it all comes down to the team. We have six people – three people in the back, but all of us work up front.”

“We talk the same way to the guy who cuts the grass and the president of the university,” said Sears. “Millionaires come in here, and we treat everyone the same. It’s that intangible, that quotation-marks ‘it.’”

That intangible quality may explain how a spur-of-the-moment idea to pay it forward came together in barely three weeks at the end of a tough year for many – and succeeded so well that the store plans to make it annual.

As Sears describes it, he and Steen arrived at work one Monday to find their wives – “Sam, Jim’s wife that he got in Tennessee and brought to Bowling Green, and my wife Sarah” – having a conversation about the Instagram account, @DowntownBGHappenings.

“They were saying, ‘Why not find some way to use it to help people out?’”

After a bit of brainstorming, the group decided to raise money to pay $200 toward struggling families’ light bills. Steen made the first donation, and the others followed suit. A graphic designer friend created a logo for the initiative, dubbed BG Forward, and the Jims started promoting it to other merchants around the square, where Morris Jewelry has stood since 1881.

“We thought we’ll make about $2,000 to $3,000, maybe help out 10 or 15 families,” Sears recalls. “Then the Josephines, a local band that’s taking off, said, ‘We want to be a part of this.’ They wanted to do a show, for free. So, we thought they could play inside our store … and we could live-stream it on Instagram. It would be like a Jerry Lewis telethon.”

As donations came in, the store reached out to local news outlets and asked people to suggest names of families that needed help. Fundraising continued a few days after the telethon.

Owner Steen says the store plans to run the benefit again. “In three-and-a-half weeks we got almost $10,000. It was kind of humbling. … We hope to make $25,000 to $30,000 next time. We plan on creating a nonprofit, so a board of five people can have oversight of the bank deposits and see that every cent of the donations goes to benefit the families.”

Steen’s family is only the fourth family to own Morris Jewelry, the oldest business in Bowling Green and second-oldest jewelry store in Kentucky. The store was established in a shotgun-style storefront built in 1850 that started as a hardware store.

“We use all the original jewelry cases built in 1881,” Steen said. “All the goldsmithing is done in house. We used to be a stop for the L&N Railroad, the conductors would stop at the depot and come here to get their stopwatches repaired.”

A Bowling Green native, Steen lived and worked in Tennessee long enough to marry and have a family before he saw a way home. He had established a jewelry wholesale company, and in 2007 worked at a retail store in a small-town mall, where he was introduced to the Independent Jewelers Organization (IJO). 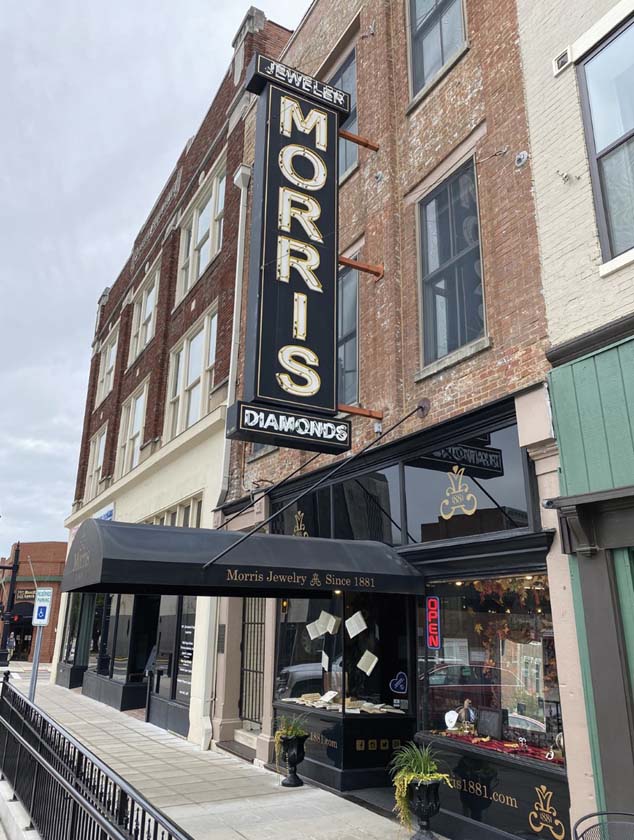 “And he agreed, and I moved with my wife and five children to come back to my hometown. … Then his timeline got pushed up, and I bought the store in 2013. I was a member of IJO, which has been a big resource.”

Today, Steen sits on the board of IJO, and is a member of the Jewelers Vigilance Committee, Jewelers of America, and Jewelers for Children. For about 12 years in a row, Morris Jewelry has been voted Best of Bowling Green among 27 jewelry stores. It’s one of only three stores that do repairs and custom work in-house, and eldest son Dallas is the main goldsmith.

When the state mandated COVID restrictions last year, Steen said the store experienced a down period during March and April.

“We shut down completely for about a week, and then we figured out how to service our customers virtually, online, with appointments, and working outside the door. We halted on repairs but kept going with sales.”

The store continues to lock the front door – which has had the added benefit of improving security. By the time the store held its annual estate trunk sale in October, the protocols were routine, and sales were normal.

Travel restrictions prevented Steen from making his twice-yearly trips to Antwerp, but he expects to travel with IJO to New York in May for an alternative, virtual Antwerp visit.

“People do hold off on engagements when they know we’re going to Antwerp,” he said.

Star Gems’ Next Gen – expanding pathways to success for retailers

Retailer Roundtable: How have you handled an inebriated customer in your store?