It’s so easy to get sucked into choosing a side. Trump or Hillary? Democrat or Republican? Sit or stand? The public intensity over everything from politics to sports can be emotionally bruising and intellectually battering. So many times I’ve wondered, “Where is the unity? Where is the good will?”

And then, there’s a glimmer of light. A beacon of hope that eclipses the heartbreak of hostile domestic relations and twenty one trillion gallons of water poured out on Texas by Hurricane Harvey! It comes in the form of people – people of all races, genders, religions and ethnic backgrounds that make up the beautiful smelting pot known as the jewelry industry.

For as long as I can remember, the people in this industry have been a shining example of unity, hope and humanity to the rest of the world. Thank God for our people. I don’t know about you, but I need to shift my focus from the bad to the good. I need heroes who help me remember it’s not all dog-eat-dog, every man for himself out there. Below are just a few Hurricane Harvey hero stories that give us reason to believe in humanity, in hope – they give us reason to keep going.

Barbara Parker’s store is 45 minutes north of Houston in Conroe, TX. While she was spared from the hurricane damage, she couldn’t sit and watch her fellow Texans suffer and do nothing. Determined to help in some way, Barbara began a campaign to collect socks and baby formula and underwear for the victims

“I told every one of my friends and clients all over the United States that we needed to help the Houston community any way we could. If that meant skipping the $20 bottle of wine we normally buy to purchase a $20 box of diapers from Amazon, then let’s do it.”

The 28 year industry veteran spent days got on the phone and on Facebook, making live video pleas for baby supplies, school supplies, towels, clothing, food and more. Donations filled her showroom as 10, 20, even 30 boxes a day arrived, many delivered by a UPS worker who’d lost his own car in the flooding.

Her customers joined in the effort. One, who owns a huge shoe factory in California, donated brand new shoes. Another donated Play-Doh and Crayola for the children getting ready to start school. Still others brought clothing, water and immediate needs goods. In all Barbara gave her time, money and store to step up, step out and take action.

Tampa is 14 hours by car from Houston. It’s a long, grueling ride, but Sergio Pages was undaunted by the distance. His focus was on helping those suffering loss from Hurricane Harvey, and nothing was going to stand in his way.

With a truck, a 30 foot trailer and a community-wide call for water, baby formula, and clothing, Sergio and a few friends set out at midnight toward the flood ravaged Houston community. Passing many Salvation Army emergency response vehicles along the way, the crew of men arrived in Beaumont, TX to deliver 2000 pounds of hurricane relief supplies. They then made their way to a shelter to sleep before making the return trip.

“We completed our goal of delivering 2000 pounds of relief goods and it feels so good. I thank God for a safe trip and being able to provide food to these hungry people. This is what makes life worth living. God bless Texas!”

As the flood waters subsided and the people of Houston searched for the way back to ‘normal,’ one local jewelry store stepped up to help those who’d lost one of their most precious possessions – their wedding rings. Robbins Brothers’ in Houston didn’t miss a beat when their phone started ringing with customers trying to replace lost rings. Immediately they offered a free Lafonn sterling silver CZ solitaire replacement to the first 100 people.

“If you lost jewelry, lost your engagement ring, lost your wedding band, I know it’s something that’s small, but it has a lot of significance and we want to help. If we can help fill that void until something more permanent gets on your finger, we want to do that,” commented General Manager Thomas Shipp.

The company, which began nearly 100 years ago in Seattle, has 15 locations across Arizona, California, Texas and Washington.

Jewelers of America, the Diamond Council of America and National Jeweler 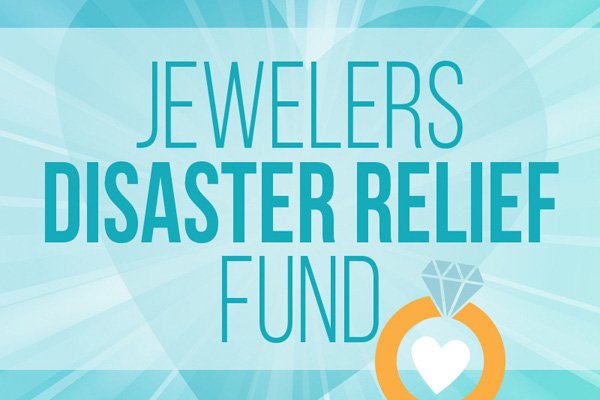 These power-house organizations combined their industry clout creating a GoFundMe page that collected thousands of dollars in donations benefiting independent jewelers in the Houston area. Rallying around our own, the page asked the “jewelry community to band together and help fellow jewelers in their recovery efforts.”

The success of this campaign, coupled with additional natural disasters including Hurricane Irma and the west coast wild fires, prompted JA and the DCA to transition the fund to a Jewelers Disaster Relief Fund. The goal is to offer a unified resource for the jewelry industry to support its own in their greatest times of need. Funds raised will be distributed to jewelers severely impacted by natural disasters. The fund had collected about $27,500 as of October 16 – www.gofundme.com/jewelersrelieffund.

AGTA, based in Dallas, Texas, raised funds for families displaced to the Dallas area. AGTA members donated more than $11,000 to the Mayor’s Relief Fund ensuring the donations would help those in need in their hometown. Douglas K. Hucker, CEO of AGTA, commented: “The recovery process for the victims of Hurricane Harvey will be a long one, and many of those families were displaced to Dallas. AGTA has a long history of helping others in need. We are proud of how generous our members are.”

There are countless others who stepped up to help. These heroes among us ran straight into the disaster areas determined to help out in any way they could. They rallied together organizing relief collection sites, fundraising events and GoFundMe pages. These heroes have given so much more than their time and donations, they have also given us hope.