Many times during the past four decades, Jeff Kaiser could have used a hand to run JB Kaiser Jewelers while he stepped out for an important family event, or even a vacation. 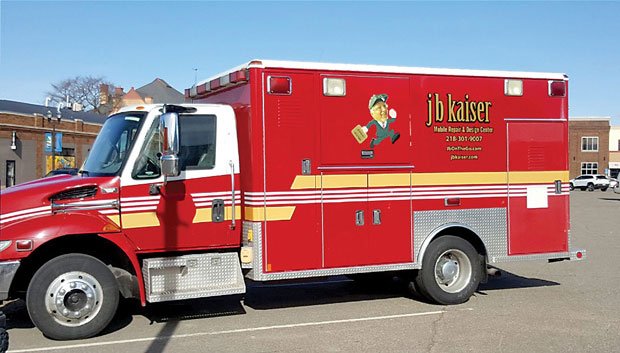 So in the midst of downsizing from his Grand Rapids, Minn., mall store and contemplating his next move, a bright idea from his girlfriend sparked an innovative new business plan: JB on the Go. JB represents Jeff’s initials – or Jeweler’s Bench.

“I had been thinking of closing my mall store for some time but wanted to keep active in the jewelry business,” Jeff says. “I knew that other professions such as doctors, nurses and pharmacists have temp services – trained professionals who can fill in when someone needs to be away for a time and allow the business or service to continue in their absence.

“I thought of the many times I missed a family wedding or reunion or couldn’t take that vacation because I couldn’t close the store for even a few days because of my lease. I was talking to my girlfriend Donna about this, and she said, ‘Why don’t you be that guy who baby sits jewelry stores?’

“We discussed it for a year or two. I first thought I’d get a trailer and modify it. Then we were in Florida last winter. We were looking at trailers and got to thinking about the cost to buy a trailer, heat it, etc., and probably I’d put $30,000 to $40,000 into it.

“When we got to Panama City Beach, we looked on the Internet and found only one that looked good, and it was in Orange County. So we drove to Winter Park and bought an ambulance. Instead of flying, I drove an ambulance back home to Minnesota! I paid $10,000 – a heck of a buy.

“It is self contained and secure. It is equipped with air conditioning, heat and power to run all of the equipment in the shop. I have a complete repair shop including goldsmith and stone-setting bench, torch, laser welder and polishing and cleaning equipment. I also have a GIA Porta Lab on board. I can think of nothing outside of casting that cannot be done in the bus,” as he affectionately calls it.

The fire department signage had already been removed, so Jeff just had to add his own. “I put a logo on the side, JB Kaiser Mobile Repair & Design Center with a caricature of me running with my kit. Some people call me the jewelry doctor because of that little caricature.”

A Slow Start, By Design

Jeff and his late wife, Cindy, opened JB Kaiser Jewelers on July 20, 1984, Jeff’s 30th birthday. He closed his mall store last July after 33 successful years, launched JB on the Go at the August RJO show in Denver, and opened a small studio with a slimmed-down inventory and fewer hours in September. “I had 11 showcases; now I’m down to two and it’s working well,” he says. Most of the business is custom design and special order.

“Starting two new but related businesses at the same time is a bit of a challenge, but one that I am very excited about. JB on the Go is going to be a slow-to-start project; I’m sure it will take at least 18 months to sprout wings.”

Jeff says when he showed his rescue vehicle at the RJO convention, it “caused a bit of a stir. I gave little tours of the bus, and there was a lot of interest. I’ve spoken with hundreds of people and haven’t found anyone who’s heard of this type of service being offered before. I understand it’s going to take some time to build the trust, having been in the business 40 some years.

“I have no commitments as of today, but there is a lot of interest among the jewelers that I have spoken to. I have even had jewelers tell me that they would like to come to work for me!”

Jeff says being a member of RJO has been a huge factor in his success as a retail jeweler, and he foresees it as a benefit for his mobile venture. “RJO is a family atmosphere,” he says. “We are all well rated and mostly smaller operations with one or two stores. This is the perfect market for my business model, the mom and pop who do not have the staff to be able to take time off for a family vacation or medical emergency. Donna and I can come in and fill their shoes on a temporary basis, keeping their doors open without disruption.”

While Jeff is out baby sitting other stores, his daughter and fellow goldsmith Sarah Kaiser-Serfling will run the studio back home. “She’s my go-to person. She worked with me over 20 years in the mall store.”

Jeff envisions his mobile business as offering services such as, but not limited to:

“This is a very flexible operation,” Jeff says. “We are able to adjust our services to fit the client’s needs.”

The price will be determined by the services a client needs. “I can drive my car or the mobile unit, or fly, depending on what services are needed by the client. We’ll negotiate the terms so it’s fair to all. There’s no limit geographically – I will go to the four corners of the earth. I’d go anywhere, and Donna will go too!” Both widowed, Jeff and Donna have been together more than six years and travel together to Antwerp every year to buy diamonds. “She works hard; she thinks outside the box and really helps me sell jewelry,” Jeff says.

Jeff’s interest in jewelry stretches way back to when he was a child. He made his first ring at the age of 12, in junior high school. “It was a silver ring that I made and set an oval cab black hematite into. It was ugly as heck. I think I may still have it somewhere. I was fortunate to be in a school district that had a pretty diverse art department and was able to continue to pursue my interest in jewelry through high school.”

Jeff went into an apprenticeship program in the jewelry manufacturing business and spent 10 years there before getting into retail. He eventually opened his own shop in the North Woods of Minnesota. “I raised four great kids up here, and all are successful. Now I have grandbabies, and life is good.”

The day he quits making jewelry, he adds, “is the day they throw dirt on me. I’m going to fish, golf and relax a bit more, but also continue doing what I love to do, which is making jewelry and making people happy.”

For more information about JB on the Go, you can call 218-326-5206, visit the website www.jbkaiser.com or send an e-mail to jeff@jbonthego.com.