Retailers and long-time industry veterans continue to mourn the loss of independent sales rep Buddy Frazier. The 30 year veteran lost his fight to oral cancer in December 2011 at the young age of 61 after battling hard for more than a year. Regardless of the severity of his treatment, his friends and colleagues still remember his upbeat, optimistic attitude regardless of his physical condition. 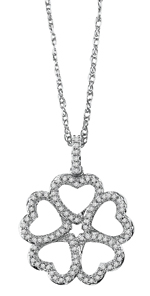 The Frazier Heart pendant – made with five hearts connected as one out of silver and diamonds – was created by Simply Diamonds to honor Buddy Frazier’s life and help raise funds for his children’s education.

“Buddy had been a part of the Simply Diamonds sales team from the very beginning,” recalls Roopam Jain with Simply Diamonds. “He truly helped us establish our business when we decided to take it to the next level and market to the independents. He understood retailers and how family companies were run and he showed me what it takes to do business with them. The last time I saw him he was so positive.”

Simply Diamonds was one of several lines Buddy represented. Among the others were: A. Weiss & Son, Imperial Pearl, LeStage Manufacturing and M. A. Reich.

Long-time Frazier clients Jodi Allen and Ione Callhoon, owners of Trinity Collection in Pensacola, FL recall what made him such a memorable manufacturing representative.

“Buddy was special. He was always offering different ideas to generate additional sales for our store. He would send pricing documents with simplified pricing charts that made it much easier to understand. He never tried to push styles or pieces on us that didn’t fit our store and, somehow, he was always able to do what was right for both his manufacturer and his client. The industry lost someone really wonderful who understood retailers.”

Buddy’s keen understanding for running a retail jewelry store came from first-hand experience. Early in his career he went to work for Gordon’s back in the ‘70s. His wife Joy recalls how he got his start:

“Buddy grew up in Pensacola and during college worked as an EMT. His freshman year he decided he wanted a career in jewelry so he could work indoors, wear business suits and travel. He went into Gordon’s and asked about a job only to be told no. Citing his lack of experience, they refused to consider him for any position in the store. Buddy shook the man’s hand and said, ‘thank you. I’ll see ya’ tomorrow.’ For the next two weeks Buddy went by Gordon’s every day only to be told ‘no’ about a job. Finally he walked in almost 14 days after the first day he’d stopped by and they hired him on the spot for his determination and persistence. His career took off after that.”

After rising to a managerial position with Gordon’s he left to join the management team of Jewel Box which eventually changed names to Carlyle & Co. In 1987 he left Carlyle to go on the road. He loved traveling and enjoyed talking with people. He thought a lot of his customers and they thought highly of him.

Buddy was a family man as well. He and Joy, his wife of 32 years, have two boys; Lyall 31 and Michael 16. Michael is a junior in high school and Lyall is a special needs adult with Autism. Both boys plan on furthering their education.

But perhaps it is Lyall who is currently showing a persistence that can only be credited to his father; after earning his Special Education Degree, Lyall is determined to earn his GED. Since 2000 he has been working to pass the Florida General Educational Development test, or GED. Each year he passes another section of it, but, to date, he has not earned the degree. Like his father he refuses to give up. Lyall has plans of taking classes at a local community college which can’t happen without his GED. 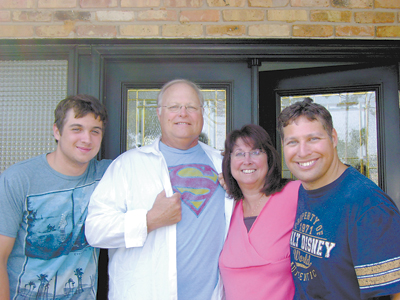 Buddy Frazier with his wife, Joy and sons (l) Michael and Lyall.

“Lyall has the same drive and determination that Buddy had,” states Joy. “He’s been trying to earn his GED for more than 10 years and he’s not discouraged. He has plans for college and keeps his eye on his goal.”

Buddy’s love of his family and his ability to touch so many people in the industry spurred Simply Diamonds and Imperial Pearl to establish funds in his name to help his children with educational expenses.

Simply Diamonds created a custom design heart pendant made with five hearts connected as one out of silver and diamonds. Called the Frazier Heart, retailers can purchase it for $40. Simply Diamonds will donate the proceeds from the sale of the pendant to an educational fund for Lyall and Michael. Contact Guy Wall at 800-746-7062, ext. 12 for additional information about the Frazier Heart.

Imperial Pearl also established a fund in Buddy’s name to which anyone can donate. Address all correspondence to The Buddy Frazier Fund c/o Imperial Pearl, 759 Waterman Ave., East Providence, RI 02914-1713 or call Imperial Pearl at 800-556-7738.

“Buddy is tough to replace,” states Roopam. “We had to hire two people to do his job and maintain our customers the way he did. Our company is like one big family and this whole thing has been very emotional for us. We want to make sure our brother is taken care of and we will do that by taking care of his children.”