Classic Creations in Diamonds & Gold draws its ambience from the nearby Gulf of Mexico: Elegant yet “comfortable, casual and no pressure.” And the gulf inspired another facet of this Venice, Fla., gem: Nau-T-Girl, whose creations inspired a new and creative entity. 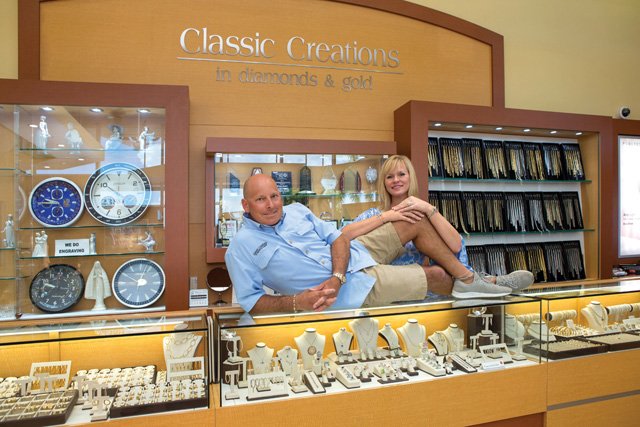 A third facet of Classic Creations is Coins, Loans & Collectables, which has its own door as a separate company under the same roof. The company springs from the early days of Classic Creations, which was known as Venice Jewelry & Coin Exchange when Chuck and Sylvia Duke founded the company in 1981.

Before moving to Florida, Chuck made false teeth for dentists in his Randallstown, Md., dental lab.

“Dad was in the National Guard and got his dental training there,” says Evan Duke, Classic Creations’ current owner. “My mother was an X-ray technician for a number of years, and she went to work with Dad in the dental lab.” 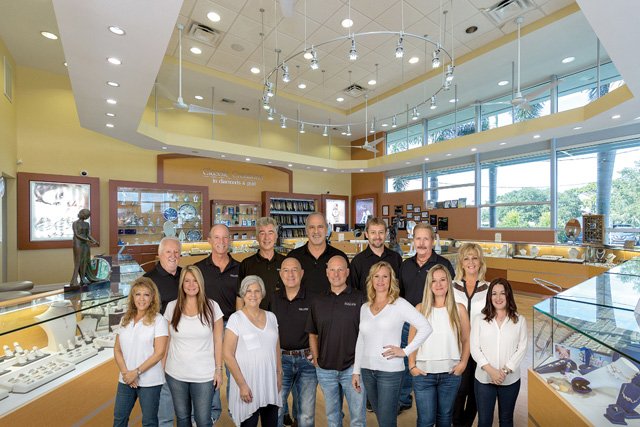 Classic Creations’ staff has grown to 14 over the years.

After Chuck became immersed in the late-1970s “cash for gold” craze, he discovered that he enjoyed working with the jewelry he was buying more than making teeth. So he ventured on to jewelry school, sold the dental lab and moved to Venice, starting his jewelry store on Venice Avenue in 1981.

Venice Jewelry & Coin Exchange operated in that location four years. In 1985, Chuck signed a lease in a new shopping center called the Venetian Plaza. Five years later, as development in Venice shifted, the Dukes moved to another shopping center, Venice Village Shoppes, about 3 miles to the south. The store then became Classic Creations in Diamonds & Gold. 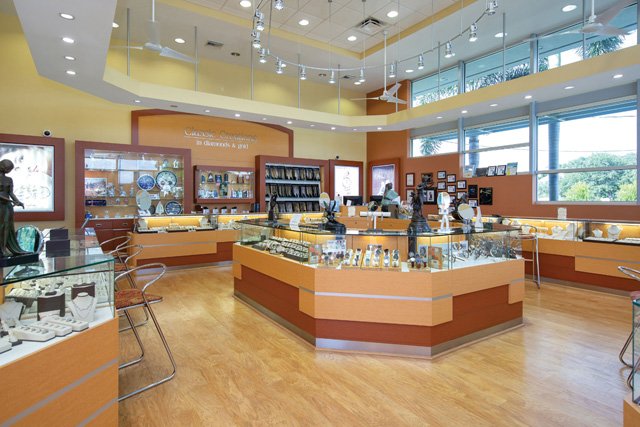 “After it opened, I went to Jacksonville University,” Evan says. “I said there’s no way I’m coming back to Venice, and there’s no way I’m working in the store,” he laughs. But the lure of beautiful water and laid-back boating lifestyle proved too tempting, along with Evan’s devotion to his family. “In 1995, I joined the family business; 24 years later, here I am!”

On April 1, 2010, the Dukes opened the free-standing location they built, own and operate out of today on Tamiami Trail. The store is 4,000 square feet, and the staff has grown to 14 people. It offers an extensive selection of jewelry and accessories, specializing in unique, custom-designed pieces along with jewelry and watch repair. The store buys fine jewelry, coins, antiques and collectibles.

Although Chuck and Sylvia, who worked alongside her husband as the store’s bookkeeper, have handed the reins to the next generation, Chuck tends to pop in occasionally. “My dad is encouraged not to, but he shows up every day,” Evan laughs. Chuck celebrated his 75th birthday in early November.

Evan, who grew up working in the family store and now holds GIA certificates in diamonds and colored stones, studied business administration and accounting in college. He acknowledges it’s an asset in running the business. “I also have a mentor I used to work with, an older man who taught me advertising. He was a newspaper man, so I know more about newspapers than most. He helped me analyze facts and figures, plan promotions and execute promotions. He helped me put together plans in what we might do, how the business would grow. If I’d call someone my mentor other than my father, he definitely would be the one.” 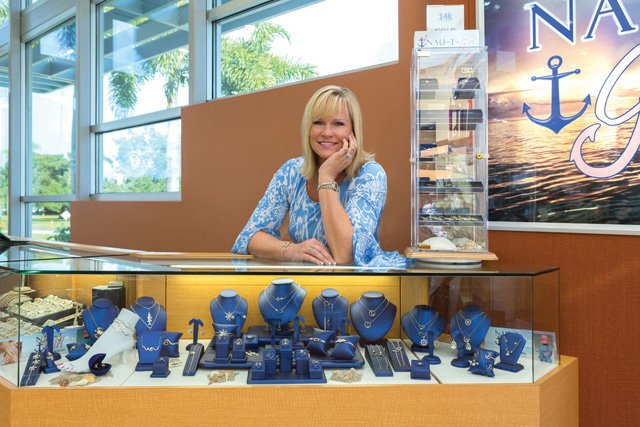 Pam launched her nautical themed Nau-T-Girl collection in 2015.Pam started working in the store with Evan in 2010 after they married in 2006. She found her niche with Nau-T-Girl Jewelry, launched in 2015. Pam designs the Nau-T-Girl pieces, partnering with a couple of different companies that do casting. Some assembly is done in the store as well.

“We were buying a lot of jewelry from different vendors, and I said we should design something of our own,” Pam says. “Then, one night we had dinner with a couple, and the husband worked fishing shows (as a national rep for a clothing brand). I said I wish there were something I could sell at these.

“Within a few weeks, I came up with the name Nau-T-Girl. I started selling Nau-T-Girl at boat shows, and it evolved from there.” The line is sold in about 30 retail stores now, from Key West all the way to Maine, Catalina Island in California and two stores at Lake Michigan. “We’re working on Puerto Rico,” Pam says. “It’s all happened in a short amount of time – we’re really excited.” 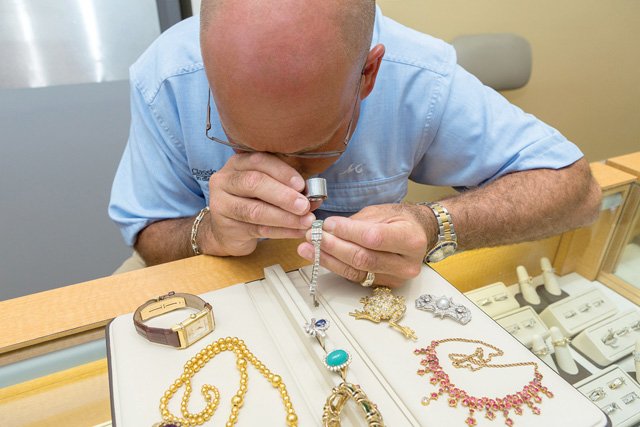 Current owner Evan Duke joined the family business in 1995.“Blue Zircon is the closest color stone I could find that looks like the water,” Pam adds. “It’s in almost all of the pieces I do; it’s my signature along with the way the anchor hook hangs sideways, for example. It’s attached at the bottom and top, so it’s more of a necklace than a charm.”

Pam just recently added Nau-T-Buoy to the collection, with thicker chains for a more masculine feel. The men’s line currently features a variety of fish, but as Pam says, “We can customize anything for anyone. I could make an anchor for men with the bigger chain and make it look manly.”

Along with their successes within the store, Evan and Pam are rightfully proud of their outstanding involvement with community charities.

“I am past president of the Chamber of Commerce and have been on the United Way of South Sarasota County Board since 1995, and still am,” Evan says. “I started a fishing tournament in 2014 for Sarasota and Manatee counties, and we’ve raised close to $250,000 in those 4½ years. It’s pretty much my baby.”

Pam’s baby is the Child Protection Center; she and Evan are team captains for the CPC’s 40th anniversary fundraiser. The couple also help Little League teams, local schools, the YMCA and local nonprofits. 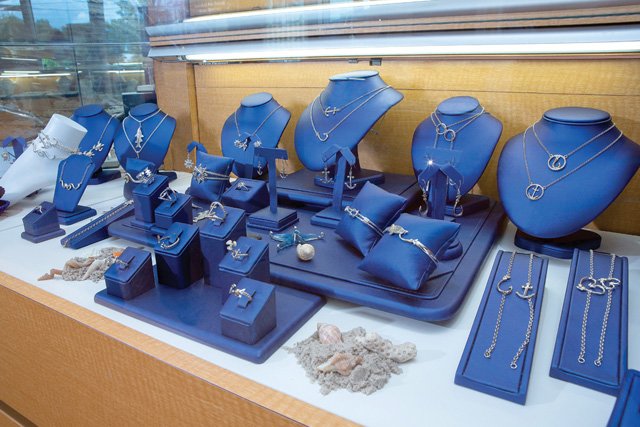