With 40 years in the jewelry business and a distinguished background in fine arts and design, jeweler Don Vodicka had a lot of ideas about creating the perfect showroom, one of them particularly brilliant: Make the entire first floor a vault.

“Basically, the showroom is a 4,000-square-foot vault,” says Don, owner of The Gem Collection. “Rather than put everything away every night, try to load and unload – such a time-consuming thing, adding wear and tear on the jewelry – I came up with the idea. I talked to my father, who’s an architect, and said why not make the entire first floor a vault, a Class 1 vault?” 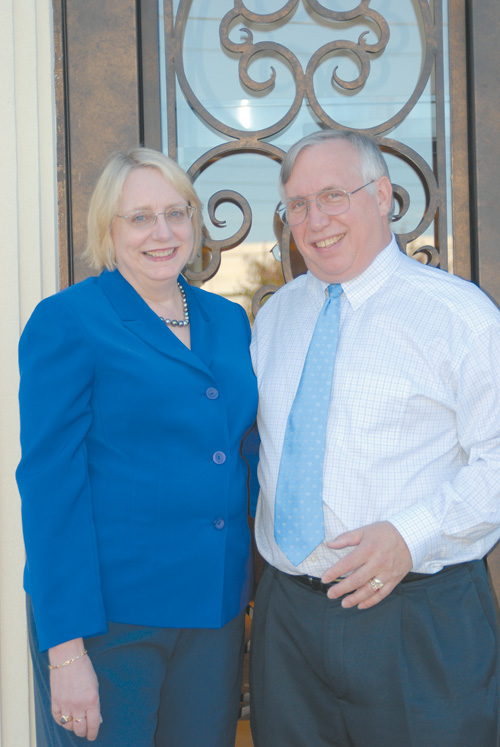 And so they did, creating an award-winning design in the process with Riley Palmer Construction Company. “We used about 200,000 pounds of rebar, running both directions every few inches,” Don says. One foot of concrete lines all four walls, the floor and the ceiling.

“The contractor and I worked on the design together,” Don says. “You can lock it up 100 percent; it’s basically a bunker. I feel like a hurricane or tornado could come through with no damage.”

An elevator to the second floor runs outside of the vault, and the front vault door itself is immense, four feet wide and almost 7,000 pounds. There’s another vault door in the back.

“The first floor has no windows,” Don notes. Duratran pictures create the illusion of windows, matching the real windows on the second floor.

“It’s a very simple building, sort of pink with a style. I laid out the two-dimensional design on my computer. It became the biggest sculpture I’ve ever made.”

Don earned his fine arts degree from , but he studied metals during his senior year, which would ultimately inspire his lifelong career.

After graduating, he slipped into work as a commercial artist, producing illustrations, brochures, logos and letterheads. But he enjoyed the control jewelry making offered.

So he took to the road, doing shows. “It was a tough experience,” he says. “We’d get rained out – if the weather was bad, we didn’t do well. I struggled doing that; I had enough of being on the road. 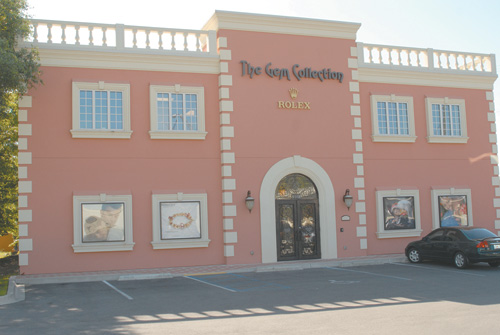 Gem Collection owner Don Vodicka laid out the two-dimensional design for his building on his computer. According to Don, “it became the biggest sculpture I’ve ever made.”

“It was a studio right downtown, and I learned the craft. I pretty much taught myself.”

He did get a little help along the way. Don’s grandfather, who died before Don got into the business, had been a jeweler. When the grandfather retired, he sold his equipment to one of his employees, whom Don would eventually contact. He spent a day watching the man work.

“I asked questions, and I guess that was really my only somewhat formal training in those early years, just one day!” Don says.

“He gave me one tool that my grandfather had owned – a dapping block to make rounded, domed half circles. He was using it as a doorstop,” Don laughs. “He said, ‘You might like this.’ It’s kind of cool to have something from that earlier time.”

“From there, I kept learning the craft, getting better at working with wax. With my strong graphics background, I could draw and make anything people wanted as far as carving – from trees to really elaborate stuff.

“It’s amazing how much time you could put into custom work back then. I enjoyed it, but managing time was hard to do. I worked 16-hour days. I could hardly catch up, so much work was coming in.”

After a couple of years, Don says, a partner asked him to share part of another store. “I had about a quarter of the store – my house was a couple of blocks away and I worked at home, making appointments to meet people at the shop.

“Then another fellow from wanted to move up to and open a store. We partnered up and opened the first Gem Collection in 1978 in a little strip center not far from my store now. I can almost see it from my second-floor studio workshop.

“It was 800 square feet. We had that place about three years when we could see that we had outgrown the space.

“At that time, I met my wife as she was working part-time for us. She was also working on her master’s degree in creative writing. The rest is history; we married a little while thereafter. She’s the other half of the business, and I don’t know what I’d do without her.

“She does most of the buying now, and takes care of the financial part.”

Dorothy also puts her writing background to use in social networking for the store, both on Facebook and a blog accessible through the store’s popular website, www.gemcollection.com. 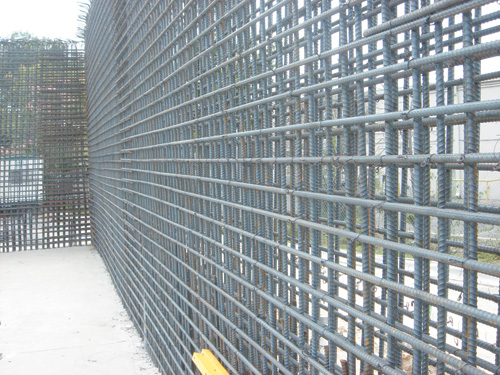 The Gem Collection was built with approximately 200,000 lbs of rebar and one foot thick concrete walls. Owner Don Vodicka says, “Basically, the showroom is a 4,000-square-foot vault.”

A stickler for detail, Don spent a couple of years getting all the designs just right.

“I doubt we could build this store now,” Don says. “It was 10 percent down then; now they’d require 30 percent.”

“On the first floor, offices are in the corners at 45-degree angles, so I can see the whole sales floor from my office, which has worked out really nice,” Don adds. “It’s very energy-efficient because of the concrete. It’s well sealed.”

Since the first floor was rock-solid, Don says, it wasn’t that much more to add a second floor. “Upstairs we have workshops, a kitchen, break room, conference room and a website/photography room.

“Our customers have really liked the store. It’s laid out well with merchandise display, and people enjoy shopping with us. We’ve had a lot of compliments and support from the community. It was an old bank building before – an eyesore.”

The Gem Collection, with 12 people on staff, carries a lot of major lines such as Rolex and Hearts on Fire Diamonds. The store is well known for its bridal lines.

The past few years have been challenging economically, Don says, but he’s thrilled to see that so far the effort and investment have paid off. In fact, The Gem Collection just enjoyed the best Christmas and Valentine’s Day in the history of the store.

“It’s less stressful now, to think that things have somewhat turned around,” Don says. “The new store and the new look have helped with our reputation.”

Don says he’s heard of people doing the vault idea with banks, “but not a whole store to my knowledge. It took a lot of courage. Some people said to me halfway through it, ‘Do you think this is really going to work?’

“But I never really had any doubt. I feel like if you think it, you can make it work.”

For more information about The Gem Collection, you can call 850-893-4171 or visit the website www.gemcollection.com.