One of the oldest African American retailers in the US

The jewelry industry is a smelting pot of races and cultures from across the globe. The people are a rich mix of various religions, nationalities and cultures who bring their unique skills and customs to the business.

But where are the African American jewelers? Where are the men and women of color with a passion for gemology and a desire to create jewelry-art like only they can?

Looking around it’s impossible to deny that African American retail owners, designers and manufacturers in our industry are in short supply. Like a rare gem of high value, we’re both surprised and pleased when our path’s cross. But why the scarcity?

It’s a question Richard Waller asked the last time he attended the JCK Show. Looking around at the 2,500 exhibitors from 22 countries and 35,000 plus attendees he wondered, ‘where are the people who look like me?’

Richard Waller is a third generation African American retail owner in Richmond, VA, and he has stories to tell. From watching his father, grandfather and uncles run the business, to standing back as a boy listening to customers lay claim to discounts simply because it was an African American store; he learned a lot more than just jewelry. He learned about life.

Through it all he’s never wavered from his goals. As past president of the Tri-City Watch Makers Association, Richard Waller is a well-respected watchmaker, Master Jeweler and the proud grandson of M.C. Waller, founder of Waller & Company Jewelers. He earns the respect of everyone who crosses his path, but his goal is to simply be recognized as a decent person.

No tools for you

This has not been easy, for any generation of the Waller family.

In the late 1800s a young Marcellus Carrington Waller begged his grandmother to give him a shot at fixing her old mantel clock. She wasn’t an easy sell. But, once agreed, Marcellus not only fixed the clock but went on to teach himself how to fix watches and various types of time pieces.

Although he started his career in insurance, he continued taking watch repairs on the side until he opened the doors to Waller & Company in 1900.

African American stores couldn’t operate in the retail district of the city, so he opened on the other side of town. Because of his skin color no one would sell him watch repair tools. But he refused to be deterred.

With a blacksmith for an uncle, Marcellus Waller learned how to craft his own tools so he could do what he loved – fix watches.

Supporting 9 children on $4 a week in the early 1900s wasn’t easy either. Three of the boys helped in the store, but only one had a son. Richard Waller became the only grandson of Marcellus and he, like his father and uncles, learned to fix watches by watching his family. Richard was mentored by the strong, smart men in his family. It was, according to him, a gift. One that he tries to repay even to this day.

After years of learning the business Richard earned his Master Jeweler certification, and in 1968 opened the second location of Waller & Company Jewelers in its rightful place – the retail district downtown. In the early 1970s he took over the family business and has lived by his grandfather, father and uncles’ guidance ever since.

“Both my grandfather, my father and my two uncles worked and taught me the business,” Richard explains. “I didn’t even know I was learning. I started by polishing jewelry, splitting crystals and engraving metal. But they also taught me how to handle difficult customers by winning them over, and how not to get yourself out of shape with people like that. My grandfather always won them over with kindness.”

Another critical lesson Richard’s family taught him was keeping your faith in the face of hardships. His grandfather, who helped start a local church, was “a person of faith.”

“Who would’ve thought that in 1900 my grandfather could start a business and sustain it for 115 years? We’ve been able to maintain and make a living for four generations. Faith has been very important to our family. On every receipt I have John 3:16 at the bottom. And I was putting it there even before I had computers, when I had to hand write it. That’s how important faith is to me. A mustard seed of faith will carry you a long way.” 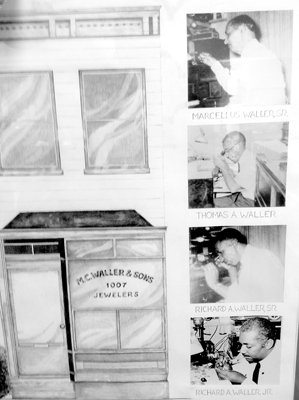 His family also taught him to give back, believing it to be a lifestyle, not an occasional event. Richard’s life exudes service, but his willingness to mentor young black men interested in learning the trade stands out. Investing years in the lives of these men knowing their goal is to leave and start their own store might not seem like good business. But, in fact, it’s good for all involved. He’s already launched one man into his own retail business after an 8-year apprenticeship, and he’s currently mentoring another young man, whom he credits with teaching him about computers and social media.

“My mentee is 17 years old and he knows all about computers. He suggested we put the store on Instagram and Facebook and YouTube, and I believe in updating and trying new ideas. I teach him the business and he teaches me about computers. You have to pass it on. I have to show my love for people and mentorships are part of that. I teach them more than just how to fix jewelry. I show them how to treat a customer, answer the phone, dress appropriately and how to interact with the customer to keep them coming back. I do that because it was done for me.”

Mr. Waller gives these young mentees more than just jewelry knowledge. He gives them a sense of pride. Pride in what they do and in who they are. Something he’s gotten from his family.

He teaches them to hold themselves to a higher standard, even when the color of their skin brings difficulty.

He demonstrates how to develop a reputation that is real and not just for show, regardless of people’s prejudices.

He passes along authenticity and a genuine love for jewelry, its people – both past and present – and giving back.

That’s what you see when you take a closer look at Richard Waller. It’s who he is, and how he does business. And, like him, it’s how his father, his grandfather, and his sons do business, still today.

It is what defines Waller & Company Jewelers.