Hans and Lynn Allwicher, co-owners of Jewelry Expressions, don’t have any special powers with the exception of Hans’ several decades of experience as a goldsmith. Since his apprenticeship in Germany in 1972, Hans has dedicated his entire life’s work to being a goldsmith and custom jewelry maker. 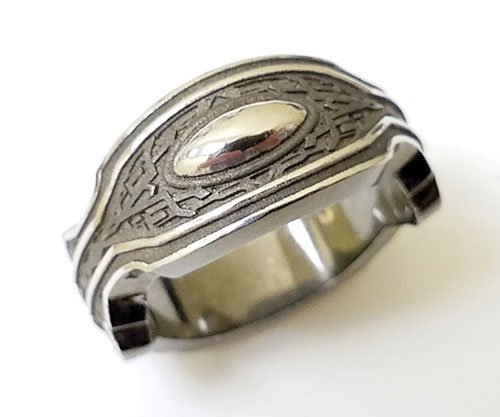 After working in several jewelry stores over his career, Hans opened his own place in October 2014. Lynn left her job working in a doctor’s office to join her husband’s new business venture. Given Hans’ prominent product placements in an NBC series and two Marvel movies, one might think his store is located in a big city in the Peach State. Not exactly.

The couple’s jewelry store is 78 miles northwest of Atlanta, in Cornelia, GA – population, about 4,200.

Hans’ high profile product placements are rooted in the old “it’s who you know” networking bromide. A customer and friend of the store produces masks and silicon props on a contract basis for some TV and movie producers. Hans and his friend were talking about the prop making business back in 2011 when the NBC series Revolution was in production.

The post-apocalyptic series is based on a story of a family surviving in a permanent electrical-power blackout in the year 2027. A pendant worn by the father is the key to figuring out what caused the nationwide blackout that happened 15 years prior.

“The Revolution pendant design is fairly straightforward,” says Hans. “It was a white metal, egg-shaped and small egg sized pendant featuring carved lines. The real trick was making the center able to power it on and off, a feature that was in keeping with the central theme of the series.”

Although Revolution lasted two seasons for NBC (September 2012 to May 2014) having his pendant design a central and reoccurring theme in a major network’s series has had a lasting impact on Hans’ small but noteworthy jewelry retail business.

The same friend came back to Hans not long after the goldsmith created the Revolution pendant. But this time his friend wanted Hans to meet with a prop master of Marvel Comics movie fame. Back in 2013 when Hans was asked to take a meeting in Atlanta with the prop master, Captain America: Civil War was in the screenplay writing stages.

Hans agreed to the meeting but was given very little information or inspiration to help create a ring for the Black Panther Marvel Comics hero that would make brief appearances in Captain America: Civil War, a movie that was released in early May 2016.

“The meeting went very well for me and I accepted the job,” says Hans. “For the sake of keeping the movie and its plot secret, the producers didn’t give me much to go on to create the ring other than briefly showing me the character’s mask. That was it.”

Nothing was conveyed to Hans about the assumed powers during his Atlanta prop master meeting. Hard core Marvel Comics fans are aware Black Panther’s power is known to come from his suit. The ring belonged to the character’s father (spoiler alert) who died in an explosion in Captain America: Civil War.

This gave Hans some interpretive latitude. Given all Hans had to go on was a visual of Black Panther’s mask he wanted the ring to be an extension of it. The mask color is black – of course – featuring a number of contrasting design elements starting with recessed silver lines in a black mask. The mask also has polished and matte surfaces as well as select patterns and textures.

“My Black Panther ring is made of white gold,” says Hans. “I used black rhodium and white gold’s colors to create contrasting features, which were emphasized with raised and recessed designs. The ring also has various textures to it and a cabochon like [gemstone] eye in the center.”

News of Hans’ product placements caught the attention of his town’s local newspaper. In a small town, Hans and Lynn have one competing store. And, news of having his jewelry designs in a TV series of national acclaim, and a Marvel Comics movie with a global audience, has definitely helped his business.

“It’s been huge for my store,” says Hans. “Word of mouth gets around and the newspaper coverage really helped bring a lot of attention to my store. It has helped with custom work and sales of finished jewelry.”

The Revolution pendant and the Black Panther ring are on display in Hans and Lynn’s store. Although the couple never hosted any events when his first two product placements occurred, he’s thinking about coming up with some clever ideas, such as movie ticket and DVD giveaways.

Customers have asked if Hans could make them a Revolution pendant and a Black Panther ring, but NBC and Marvel Comics own the copyrights for the pieces of jewelry. Hans cannot reproduce these items for sale in his store. But, the prototypes and copies of the product placement jewelry items are proudly displayed in the couple’s store.

Black Panther will be released in February 2018. Hans hinted that another Marvel Comics project is underway for him in his shop – a signet ring that actor Hugh Jackman will wear in an upcoming movie, which Hans is not at liberty to discuss.