Part two of our four-part series discussing best retailer practices as the spokesperson for your business.

In the early years of being his own boss, Doug Meadows, owner of Marietta, GA-based David Douglas Diamond & Jewelry, wanted to be his store’s own spokesman. After much procrastination, one day he signed a contract with a local AM radio station and simply forced himself to do his own commercials. 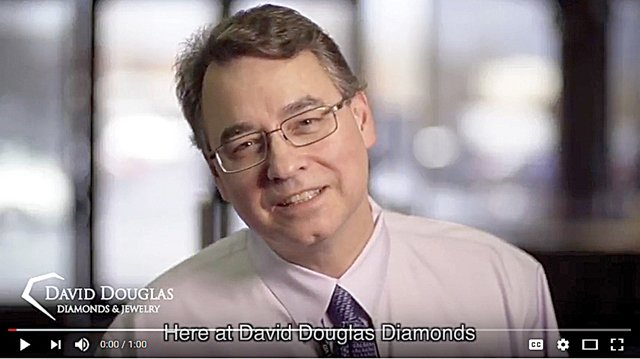 The days of viewing inexpensive, bartered radio-advertising contracts as a learning process are long gone for Doug. For him, however, it was a necessary first step to begin his career quest of being the voice, face and messenger of his jewelry retail business. The baptism in fire approach worked.

In the formative years, Doug was determined to learn the spokesperson basics of pronunciation, projection, timing and cadence by virtue of OTJ (on the job training). Winging it with natural abilities, and an inherent folksy genuineness, Doug’s first radio commercials needed one crucial quality – attention-getting radio copy.

He sought the help of Michael Buley, owner of Jewelry Ads That Work, for what Doug calls “edgy radio copy” and Jimmy DeGroot, owner of JewelryStoreTraining.com, for general advice and technical support.

The low-watt AM radio station worked well for a couple of years, but by 2005 Doug was ready for FM. A man committed to his faith as much if not more than his business, Doug inked a radio-advertising contract with 104.7 FM (“The Fish”), an Atlanta-based Christian radio station. With his new radio partner, he continued doing mainly store spokesman commercials with other ad types and formats in the promotion and marketing mix.

That same year, Doug found out that a Texas sister station to his local FM radio partner was hosting a Celebrate Freedom concert in Austin. Knowing the concert was headed to Atlanta in the summer of 2006, Doug wanted to do a promotional event as part of the concert. Doug’s anticipated event would take his store spokesman skills to the next level by organizing a Get Engaged on the Stage event at the Celebrate Freedom concert in nearby Atlanta in 2016. 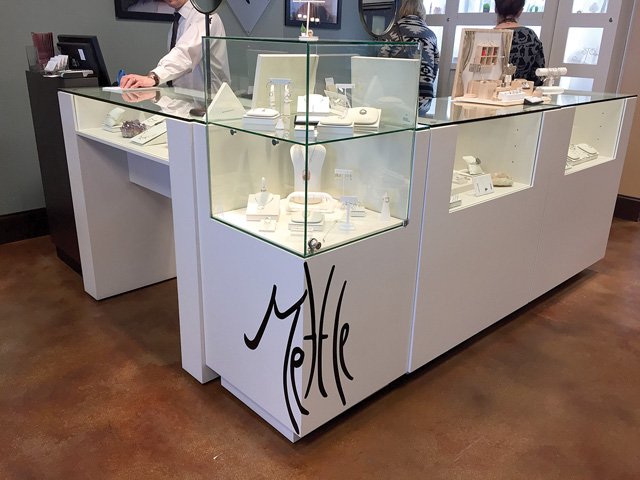 Doug’s chief custom designer Abby Fincannon has her own store within a store and is the main spokesperson for custom design work.

“I was the emcee of our event and had to do this in front of 50,000 concert goers plus the live audience,” says Doug. “It was nerve-racking, but I got through it. The event and all the marketing and promotion to get the word out really propelled us in terms of sales and brand recognition. And, I got that much better at speaking to an audience.”

Things were going well for Doug and his staff. But, over the next seven years, Doug would leverage his store spokesman skills to weather difficult periods in his professional and even personal life. Like most retail jewelers during the 2008 housing market crash, Doug was hurting bad.

Doug needed to minimize expenses, stem hemorrhaging sales, and reinvent himself to bring in new bridal blood all while improving his cash flow to keep the doors open and pay staff. A Stuller customer for jewelry retail and bench essentials, Doug was invited to a Bridge event for the Lafayette, Louisiana-based findings and jewelry company. (Bridge events by Stuller help jewelers improve aspects of their retail business by using various Stuller products and services, www.stuller.com/bridge.)

When Doug attended a Bridge event in 2009, he needed a lot of help fast and he had to implement a number of fundamental and major changes to his business on a very tight budget. “When I attended the Stuller Bridge event in spring 2009, I wanted to return the following year as a poster child of success,” says Doug. “I replaced most of my live inventory with prototypes, started working their CAD programs, and brought in custom jewelry designing with CounterSketch.”

As if to channel Franklin Delano Roosevelt and the historic president’s famous Fireside Chats, Doug’s commercials went from promotional to conversational, almost openly confessing to his customers that times were tough. In his dialogue, he thanked his customers for their patronage and asked them to stop in and see the changes to the store and his business model.

The formula and format worked. Doug was able to keep his doors open while implementing unprecedented shifts to the way he served and serviced his customers. In 2010, an opportunity of a lifetime came when Doug’s retail dream space opened up in a high-traffic part of town. 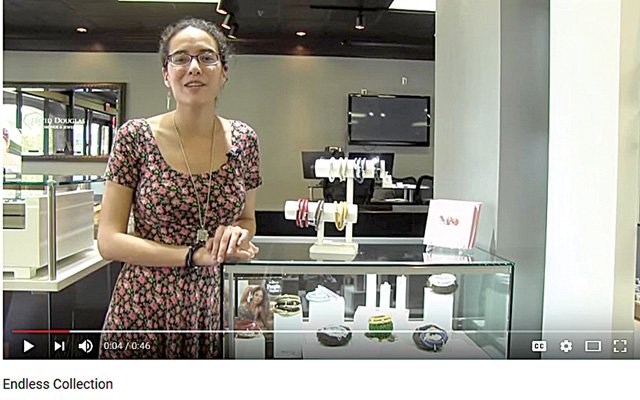 Assistant store manager Nicole Blackburn talks about one of the store’s new collections in a YouTube video.

Once again, Doug communicated with his audience about ongoing changes to his store. “This is when we stepped up with more video,” says Doug. “The changes to the store were visual as well as operational, so we needed an emerging new visual medium, and video and social media [YouTube and Facebook] became our go-to promotional platforms.”

Again, the dialogue with his customers worked very well for Doug. The new store and changes to his business with more CAD and custom and less live inventory was working their collective wonders, along with a solid team and store leadership. In 2015, however, Doug would face one of the biggest personal struggles of his life when his spokesman connection with his customers helped him get out of a very deep hole.

Still feeling the pinch of operating costs, Doug skated for some time without health insurance. In the summer of 2015, when his son was getting married, a happy time turned suddenly tragic. Doug was using a tractor to do some significant landscaping work for the rural wedding destination when the heavy farming equipment flipped and trapped him underneath. He was in ICU for six days. With medical costs ticking up by the hour, Doug was faced with an enormous hospital bill. 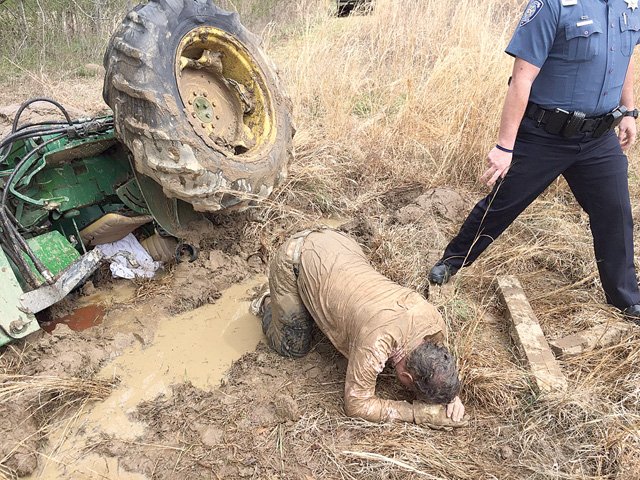 The tractor accident image used in the GoFundMe page to help Doug cover his hospital bills.

“Jen Taylor Foster, our store manager, reached out to our customers and started a GoFundMe account called ‘Restore Doug’,” says Doug. “Miraculously I was able to dance with my daughter-in-law at the wedding reception shortly after being released from the hospital. And the bills eventually were all covered.”

Years later, Doug still feels the occasional twinge of pain, a reminder of the accident, but that doesn’t get in the way of advancing his business. He’s continuing to work in video with a number of educational pieces. Comfortable in his role as spokesman (complete with coffee in hand), Doug and his staff talk custom work, scheduled events, new collections, updating appraisals and the virtues of routine jewelry cleaning and maintenance in videos posted to Facebook and YouTube.

“We’re doing lots of videos from under a minute on new collections and event calls to action to longer live Facebook videos and in-depth videos on various educational topics ranging 15 to 20 minutes on behind-the-scenes looks at custom work and appraisals.”

Doug also shares the mic and video camera with his son Joseph, who is taking on more of the family business operations. And, staff have their communications roles as well, showcasing not only products and services, but also individual skill sets. But no matter the message or the messenger, Doug’s mantra is consistently and continuously communicated.

“David Douglas Diamonds & Jewelry is a fun place to shop for jewelry, in a relaxed, no-pressure store,” says Doug. “Guys enter a customer and leave a hero. That’s our message.”