‘Getting women into trouble and men out of it since 1893’

Ernst Jewelers’ tagline is a sign of lighter times 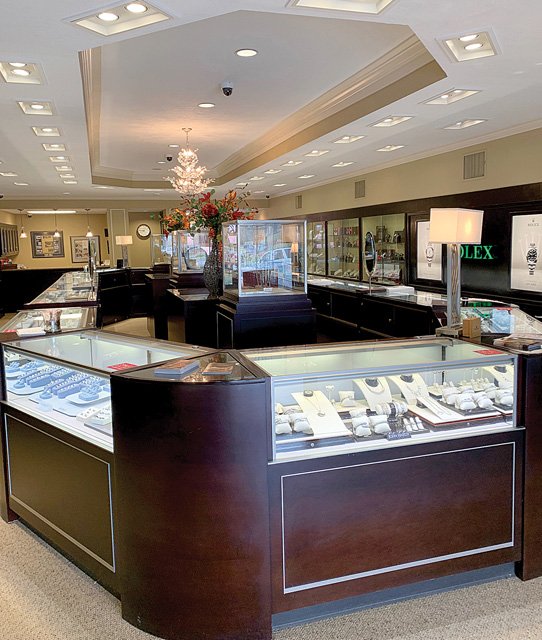 Ernst Jewelers is expanding from 2,200 to 2,800 square feet this year.Ernst Jewelers in Huntsville, Texas is well into its second century, having opened for business in 1893. Much has changed over the decades, but it’s been just recently that the store has loosened its tie. While still offering quality designer brands, custom design, jewelry repair and watch repair, customers and staff alike are treated to a more casual atmosphere.

“We started making little jokes with the staff, and our tagline (Getting women into trouble and men out of it since 1893) just came about five or six years ago,” says owner Robert Ernst. “Times were more serious when my dad and granddad operated the store. My dad taught me the value of hard work and how to successfully run a business. I decided if I was going to do this for 30 to 40 years, I’d better make it to where I wanted to go to work every day.

“When I worked with my dad, it was coat and tie every day. When I bought the business, we started closing the store on Mondays, giving our staff a chance to recharge their batteries. We stopped wearing suits every day. I think it makes our clients feel more at home. We wanted to create a welcoming, relaxed yet still professional environment. We like to have fun. We make fun of each other, and there’s laughter.”

Ernst’s four employees work Tuesday through Saturday. “Our staff is our family,” Robert says. “One member, Georgia, is celebrating over 20 years with us. 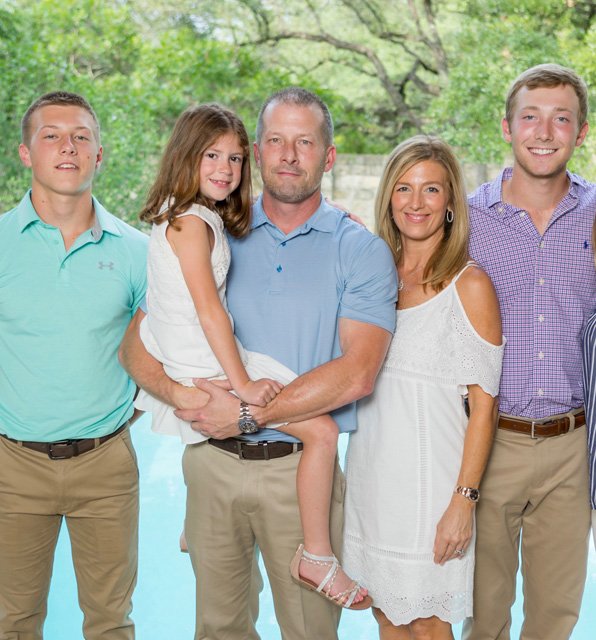 “Everyone works every day,” Robert adds. “I pay them to work through lunch. They like it because they’re still getting paid while eating in the back. It’s a good work environment – we even close the Friday, Saturday and Sunday after Thanksgiving. We’re the only store I know of that closes on Black Friday. Then I wear them out after that – we’re open six days a week for the rest of the holiday season.”

Robert – formally Robert C. Ernst Jr. – is the fourth-generation owner of the store in Huntsville, 70 miles north of Houston. He comes from a long line of Roberts. His great-grandfather was Robert Ernst, who partnered with another gentleman in 1893 to open the store, eventually buying him out. Robert’s grandfather, Robert Augusta Ernst, ran the store for a number of years, and his father, Robert C. “Bob” Ernst, took over in the 1970s. The current Robert bought the store from his parents 10 years ago. His son Robert Taylor Ernst goes by “Taylor,” signaling another little break from the past. 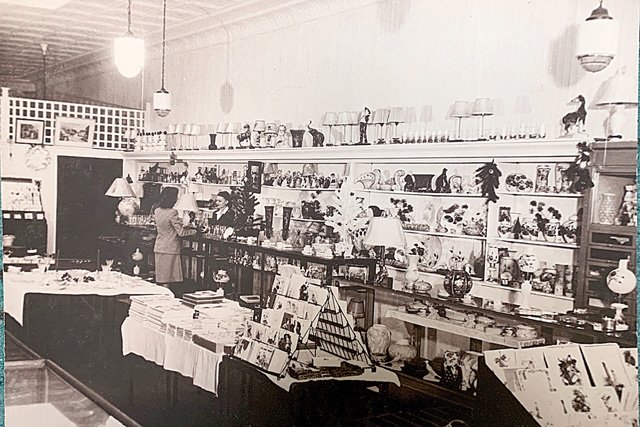 “We’ve been in the same location 65 years,” Robert says. “We were in the first location 60 years. The stores were on the same street; we just moved two addresses down. We’ve always been on the south side of Courthouse Square, back to the days of horse-drawn carriages.”

The family business branched out in 1949, when Robert’s grandmother opened Mt. Vernon Gift Shop, just two doors down from Ernst Jewelers. “She, my mother-in-law and myself all worked and ran this location,” says Robert’s wife, Blythe, who currently works alongside her husband at Ernst Jewelers. “We offered china, silver and gifts for all occasions. Also, in the ’80s, my mother-in-law added children’s clothing and toys.” The store closed about 10 years ago when internet shopping and big-box stores became popular. “Brides did not register for china and crystal like they used to do,” Blythe says. “We could no longer compete with the big stores.” 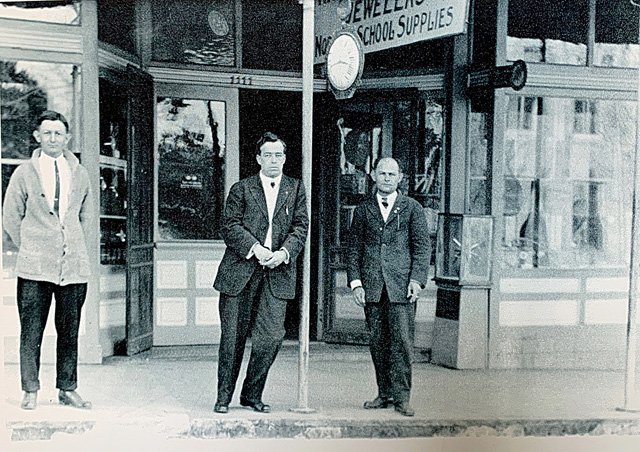 In the Ernst Jewelers building, which the family rented, transistor radios were once sold along with jewelry and even eyeglasses – the store served as a local optometrist. “We’ve tried to keep up with the times,” Robert says. “We take pride in customer service; we’re a destination store as there is no drive-by business here. Our customers like coming here. We are selling to families that shopped with my grandfather and father. We think of both our customers and our staff as family.”

Ernst Jewelers is now expanding into the building next door and out to the sidewalk, providing more room and installing a corner Rolex boutique. The store will grow from 2,200 square feet to 2,800 when the renovation is complete this summer.

“This will be our second remodel in the last 10 years,” Robert says. “We are trying to stay current in today’s trends but still keep the tradition, values and roots. We look forward to the new Rolex build-out; we think it will be a wonderful addition to our store.” 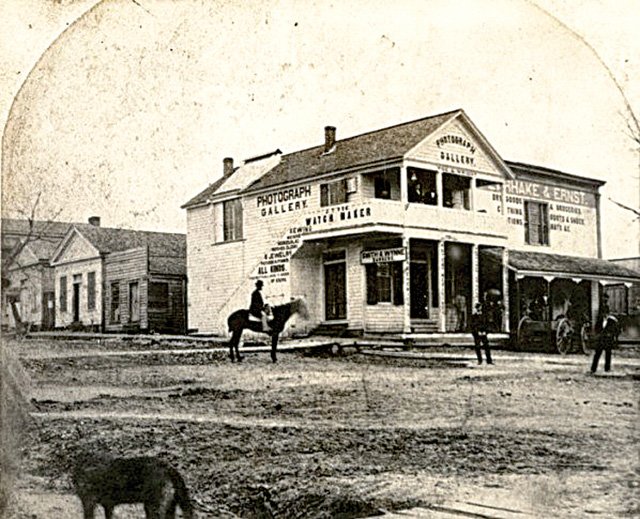 Ernst Jewelers has been loated on Courthouse Square in Huntsville, TX since the days of horse-drawn carriages.

When Bailey Banks & Biddle closed a local store about 10 years ago, Robert was able to purchase more than 50 drop-down security cases for a fraction of their original price. He kept most and sold the rest, which helped finance the remodeling. “That was right when the economy was crashing and I thought, ‘Oh no, this is not a good idea. But we stayed the course, and it turned out OK. We have not lived outside our means, so when tough times come, we’ve been able to withstand them.”

Ernst sells a wide range of jewelry and gifts. “We’re heavy on the designer brands including Gabriel & Co, Vibhor, John Hardy, William Henry, along with Luminox watches for guys,” Robert says. “We’re also a SureFire flashlight dealer. We have a unique mix of jewelry and merchandise. One of our six windows is always decorated in a military or patriotic theme. We always donate to military and law-enforcement causes. For law-enforcement officers and EMS, we offer watch batteries and sizing for free.”

Even though the family is steeped in the jewelry trade, Robert is encouraging his children to strike out on their own paths. Taylor is nearing graduation with a management degree at Baylor University; Cade, a freshman at the University of Texas at Tyler, is eyeing a military career, and 9-year-old Issa is in third grade. “I encourage my children to go out on their own, make their own way,” Robert says. “If they decide to come back into the family business, we want it to be their decision. We would love to have them carry on the Ernst name and tradition.

“When I graduated from high school, I thought I was never coming back. I worked at Tiffany in Houston after graduating from GIA. Blythe and I were married, and when my parents asked us to come back, we did. Huntsville is a wonderful community we are proud to be a part of. It has been a blessing to our family.”