Passion attracts. It brings with it an intensity all its own that draws people in like a moth to a flame. Jorge Adeler, a nationally recognized jewelry designer and owner of Adeler Jewelers in Great Falls, VA exudes passion for both his business and his family. The emotion with which he discusses the timeless existence of jewelry or the joy he has working with his daughters overflows like a wave crashing onto the shore. His love for all things beautiful convinces the listener to join him on a journey of admiration for what can be done with nature, and trust me, no one refuses his invitation. 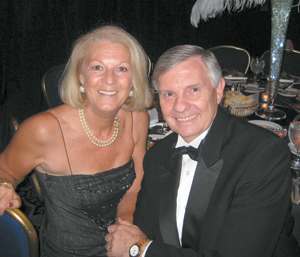 Jorge (r) and Gachy Adeler, owners of Great Falls, Virginia based Adeler Jewelers, left Argentina in 1973 in search of the American Dream.

Finding the source of Jorge’s passion requires an international trip to Argentina where he grew up. His love of gemstones started there as a child where his natural curiosity pushed him to become intimately familiar with the land and the gemstones found there. With Brazil and Columbia in close proximity, Jorge was able to experience their stones as well.

When he arrived in the US in 1973 he had only $450 in his pocket and his wife, Gachy, and two young daughters, Wendy & Valentina, by his side. He’d grown up hearing stories of the endless possibilities in America and he believed every one of them. He knew that if you dream big enough and work hard enough anything was possible here. Jorge was both a big dreamer and hard worker.

With only his family to lean on, he began crafting jewelry in the closet of his tiny apartment. He traded fish hooks for stones which he would take to his closet and turn into $5 pieces to be sold at local craft fairs. Although Jorge didn’t have a clear business plan, he was certain of one thing: he couldn’t work for anyone else.

“I knew I had to be in business for myself because I really can’t follow orders. I’m not someone who follows instruction well and I have a serious problem with authority.”

As he continued to teach himself the intricacies of jewelry design his dreams began to take shape. Five years after he sold his first craft piece Jorge opened his own store in Ocean City, MD. His passion and talent became well-known and soon he opened his 2nd, 3rd and 4th stores. The fifth store to open was in Great Falls, VA, the current location of Adeler Jewelers. Although he didn’t know it at the time, it was a very smart business move.

Jorge Adeler with his five grandchildren. Adeler considers his family his greatest blessing.

“Great Falls was very small when we first opened,” recalls Jorge. “It was dairy farming country and customers would ride their horses to the store. Today Great Falls is the highest income zip code in Fairfax County and Fairfax is the wealthiest county in the nation.”

Someone was looking out for Jorge, or as he puts it, “God aligned everything in my path.”

For 24 years the Adeler family spent summers in Maryland and winters in Virginia. It wasn’t until 1998 when his daughters married men from Virginia that Jorge consolidated the stores to the Great Falls location. As Jorge puts it, “I really just wanted to be a local jeweler and to be respected.”

Part of ‘doing it right’ meant working with his daughters. From the time they were born Jorge knew he wanted to work with them in the store. It wasn’t a matter of if, it was when. After receiving their education both Wendy Adeler Hall and Valentina Adeler Armour wanted to come on board and work with their father.

“I’m very blessed to be able to work with my daughters. Each one brings unique assets and talents to the business. One is extroverted and the other introverted and multifaceted. Both are in depth and amazing businesswomen. It is ideal to have both personalities presenting varying views when making business decisions.”

Jorge uses their varying personalities to help guide his custom design work. Every decision at the store requires a unanimous vote from all three of them, which isn’t easy to come by given their differences. But Jorge stands by this rule and contends “if we can’t come to a unanimous vote then we won’t do it. And when I’m wrong they don’t hesitate to tell me ‘I told you so!’”

Whatever their formula is, it works. The Jorge Adeler line has adorned some of the most famous people in the world including a long list of celebrities, White House officials, State officials, even a former Pope. Most recently his pieces were seen on Sofia Vergara from “Modern Family,” Mariah Carey and Jenna Fischer from “The Office,” while walking the red carpet at the Emmy’s.

Jorge has also been known to rub elbows with likes of Annette Bening, Sam Brokaw and Secretary Kathleen Sebelius of the Department of Health and Human Services. Adeler’s name has become synonymous with top quality stones and award-winning designs. But don’t ask him to do any name dropping. At the end of the day the only names you’ll hear are family names, like Eden, Paige, Ashton, Bradley and Chase.